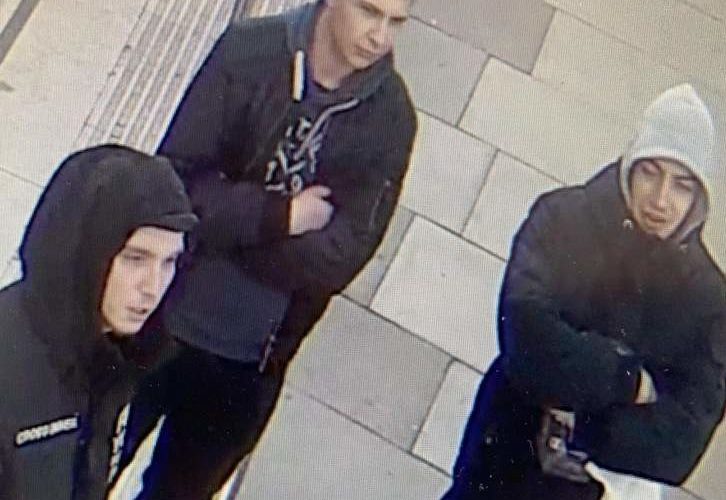 Do you recognise these vile thugs?

If you do REPORT THEM IMMEDIATELY TO THE POLICE because they do not deserve to walk the streets.

The braindead pigs in the picture above plus another hooded lad not in the picture are being hunted by the police after they homophobically attacked two guys who were walking hand in hand along London’s South Bank on New Year’s Day! They were left with head injuries and bruising.

Detectives have described the savage attack as a hate crime and have appealed to the public to help track down the four youthes and issued a clear CCTV image of three men they are trying to trace.

The attack took place at 2.30pm on January first and the moronic cowards were seen running away in the direction of the OXO tower.

In a statement, the Metropolitan Police said: “The victims, aged 28 and 31, who were holding hands, suffered facial injuries and bruising in the assault. They did not require hospital treatment.

“The suspects are all described as white, aged in their mid-20s and wearing hooded tops. They left in the direction of the OXO Tower. Officers are issuing images of three of the four suspects in a bid to identify them.”

Anyone with information is asked to contact officers at Lambeth via 101 quoting reference 6108/1Jan or tweet @MetCC. Alternatively, call Crimestoppers anonymously on 0800 555 111