NSFW Merry Christmas everybody, as Matthew Camp reveals absolutely EVERYTHING! 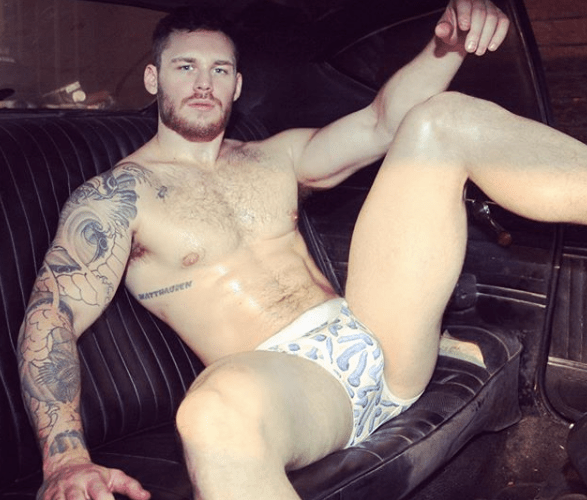 Fans of actor Matthew Camp will no doubt be well aware of his rather steamy Instagram feed, featuring numerous selfies of himself in a delicious state of undress.

And when you look as fine as he does, who’s to complain, eh?

But for those of you frustrated that you can’t get a full all-over view of him (he rather carefully disguises his naughty parts with hilarious emojis), we bet you must be gagging to see what he has to offer.

Well, boys, worry no more, as pics have emerged of him online totally starkers. And well…. what can we say….? You won’t be disappointed as he appears to be a rather big boy! Not that size means everything, right?

Of course, as we know, the naked male body is still bizarrely considered taboo in society, even though it seems perfectly acceptable for a woman to flash her breasts and baby maker without much comment.

What is the big deal? We all have nipples, a butt and a penis, if you’re a guy that is. What’s it be ashamed of?

Of course, it’s an argument that rages on and on, even in 2017, which we don’t really want to get into. So to avoid getting into one of those ‘blah blah blah’ online spats with some do gooder, we’re suggesting, that if you fancy a pre-Christmas treat you should feel free to click on this link Matthew and his monster

Last year we chatted to Matthew about his penchant for nudity and why he is so happy to be togs free.

What is it about showing off your body you like so much? What feeling do you get from it?

I like to be able to move unencumbered so being naked most definitely has its advantages.

When you were go-go dancing did that make you feel more confident about you body.

I wouldn’t say more confident. I mean, I don’t look at my self and think ‘oh jeez’. But to be honest, most of the time I just don’t care what other people think. I’m just happy within myself.

Of course, and they have removed certain pics. I don’t know what their problem is. It’s just a body, right? Would they censor a painting in an art gallery?

That’s a huge question… the short and the long .. I think some people have the need to feel important, so they judge others using artifacts that they themselves have picked up along their journey though cultural indoctrination.

Do you like to pose nude to cause a reaction?

Well I like being naked anyway but I have to admit that being nude does always give me a tickle.

We all know that men have a penis – why do you think showing a penis in photographs or in films is so taboo even in 2016?

I think until people are not ashamed of their own bodies showing a penis will always be taboo. But what’s the big deal? All guys have them. They’re a body part. Why should they be so offensive.

Do you think that one of your nude photographs is as beautiful as a painting featuring a nude man – is there a difference?

Finally your pictures obviously appeal to your fans – what kind of reaction do you get when you post pics?

All kinds. Some people tell me they like what they see, others are more explicit in their appreciation. But I really like reading the comments because sometimes they are funny, so keep them coming.

Body image is important to you as you have been building it up – are you creating a body to make YOU happy or to attract attention from others.

That’s a leading question! I like to feel my body when it feels good, that’s why I push my self at the gym. If my body looks good that’s because I have a well balanced exercise regime.

You know, I have found that people are offended about everything these days! Fuck them!