Zac Efron: ‘If you’re gonna pull your d**k out, it better be for an Academy Award winning movie’ 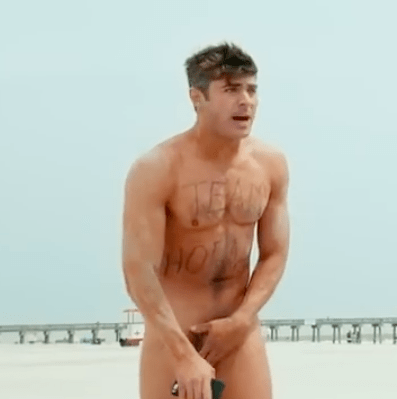 We’re starting to think gorgeous actor Zac Efron might be a secret exhibitionist. In most of his recent films, the handsome fella has found it hard to keep his clothes on (not that we’re complaining, of course). Now he has sensationally revealed that he’d have no problems going full frontal on screen! GULP!

‘Let’s just say I’m not opposed to anything,’Zac said in an interview with Elle magazine when asked about onscreen full frontal shenanigans. ‘But if you’re gonna pull your dick out, it’d better be for an Academy Award-winning movie.’ So come on Hollywood – someone write that part for Zac, pronto, cos we’re guessing his next film Baywatch The Movie ain’t in the running for any Oscars!

In the glossy monthly interview, Zac reflected that for a while he became obsessed with with his public persona and his journey to sobriety that saw him visit rehab in 2013.

‘What I found is structure,’ he explained. ‘That led me to a balance of opposites: You get out of life what you put in. There was a moment when my morning routine was, like, get up and Google yourself. But that stopped, dramatically and instantly, probably three years ago. I realised that viewing yourself through other people’s pictures is not living your own life. I wasn’t really being myself. A lot of my hobbies had gone out the window. I couldn’t skateboard or surf for fear of being followed. Crossing the line of fear is what leads to greatness.’

Bad Neighbors 2 is out now.