Why Manchester’s new gay Lord Mayor will change ALL of our lives! 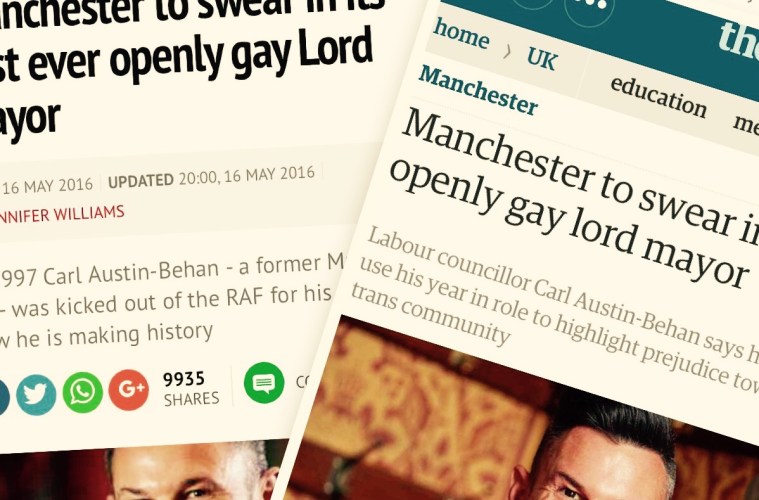 GuysLikeU contributor Hadley talks about why Manchester’s new Lord Mayor has got him VERY excited!

Manchester’s new Lord Mayor, Councillor Carl Austin-Bahan, has attracted the attention of many in the lead up to him being sworn in on Wednesday. Now, the swearing in of a new Lord Mayor wouldn’t normally fill me with motivation to write an article, but Councillor Carl isn’t your average Lord Mayor. In fact, I’d argue he is paving the way for a more modern and diverse generation of Mayors.

Prior to embarking on this new and exciting chapter, Councillor Carl grew up in the Greater Manchester suburb of Crumpsall. At the age of 17 he decided to come out as gay. Actually, he then tried to come out once again at the age of 22, having been told that it was ‘just a phase.’ He then went on to work in the Royal Air Force, but in 1997 his dreams came to a sudden holt, as he was kicked out because of his sexual orientation. But Councillor Carl didn’t let this hold him back, given that four years later he added the title of Mr Gay UK to his CV.

Today Councillor Carl and his husband Simon are enjoying life as newlyweds and are currently beginning their adoption process. All of this, coming at a time when Councillor Carl is to become Manchester’s first openly gay Lord Mayor.

Manchester has one of the largest gay scenes in the United Kingdom, but there’s no getting away from the fact that there are still problems to be addressed when it comes to diversity and inclusivity. Talking to the Manchester Evening News, Councillor Carl said ‘The barrier is more to do with the trans community now.’ It’s encouraging to see him acknowledging this issue, given that sometimes the focus seems to be put on addressing issues around homophobia – transphobia and trans awareness can often be overlooked.

Another issue that Councillor Carl will be focusing on is HIV. He feels that people may have become slightly complacent around the issue, saying ‘People seem to have forgotten about everything we went through in the late 1980s.’ He is going to focus on making testing easier for the people of Greater Manchester, which can only be a step in the right direction. It’s also some encouraging news for HIV campaigners and people living with HIV, in the wake of the Government’s announcements surrounding funding for HIV services.

So who cares that Manchester is getting an openly gay Lord Mayor? Well, I’d argue we all should. Councillor Carl Austin-Bahan is showing Manchester, the United Kingdom and even further afield that being gay shouldn’t hold you back in your career, or life, for that matter. Not only is he starting in a ‘traditional’ role, as an openly gay man, but he is also starting a family.

In a way, Councillor Carl is showing us that it doesn’t matter if you’re gay or straight, you can start a family and become Lord Mayor of Manchester, should you wish. The fact he has also spoken up about trans awareness is a testament to his inclusive and open approach to his new role. An approach which I’m sure will benefit many Mancunians.

What do you think about what Hadley says? How important is it to have more openly gay public figures, especially in politics? Comment below or drop us a line at hello@guyslikeu.com