What made Adele pull this face? (HILARIOUS VIDEO CLIP) 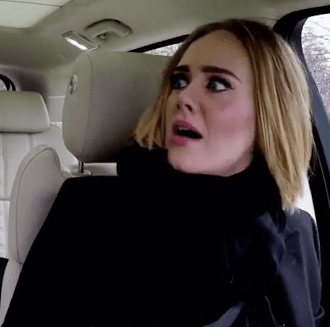 Adele is brilliant! Fact! She can sing. She can write a tune. She could probably fly if she put her mind to it. But most of all she is f**king funny!

And we reckon she’s never been as hilaire as she is on this edition of the brilliant James Corden’s Carpool Karaoke.

The rib-tickling star had us in stitches as the pair drove around a very rainy looking London.

During the clip, she questions her new barnet, asking, ‘Is it a mum bob, like me mum’s friends’ and wonders where she should ‘wear a wig-wig or a weave.’

As they drive, she spills tea all over her new coat (that she bought out of her ‘budget’) and reveals that before Christmas she went for dinner with a pal who was so late, she proceeded to get through a few wines and ended up  talking to a family and paying for their dinner. Lucky family. 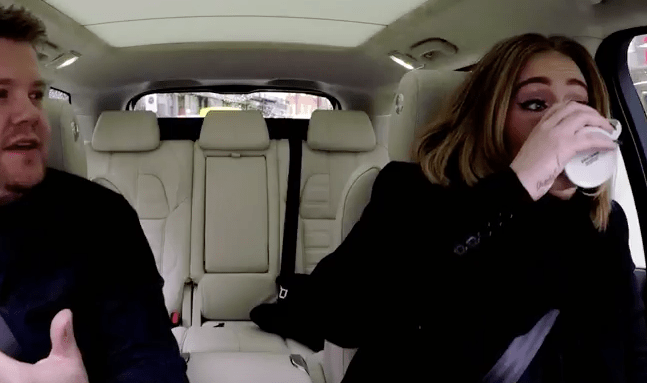 Adele also explains that her love for the Spice Girls is totally one hundred per cent genuine. ‘I loved The Spice Girls. It wasn’t a piss-take. They were a huge moment in my life. They were five ordinary girls who did well and got out. I wanted to get out too, I don’t know where from, but I did.’

She also confessed that she used to have Spice Girls parties on her own and experienced heartache for the first time. when her favourite member Geri left was the moment, ‘I was truly heartbroken.’ Music wise, Adele says that 25 will be the last album to feature her age as a title, explaining, ‘I believe in trilogies’ but explains that she names albums after her age because they’re ‘a polaroid of parts of my life’.

But as we all know, Adele is best heard, so skip all this preamble and head straight to the clip and enjoy the greatest popstar do her thing – and SING WANNABE!