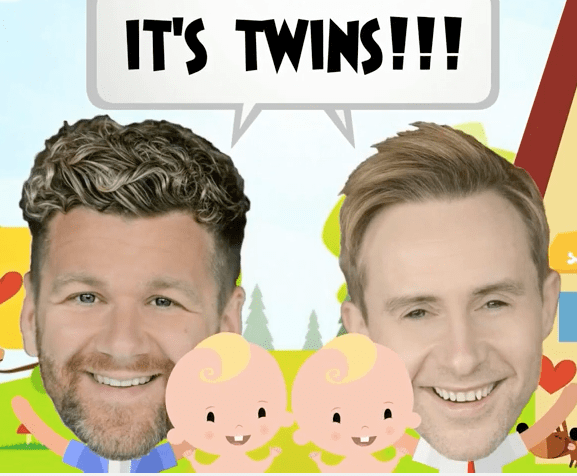 The babies were born via a surrogate over the weekend and the gorgeous couple were quick to let the world know, posting a pic of the babies’ name bands, with the words: ‘We are DADS! We are totally & utterly in love!’

‘I’ve always known that I wanted children ever since I can remember, ‘ Ian said in a previous interview. ‘Most of my friends have settled down and had babies and I suppose it just feels really natural that we are doing this now.’ Ian and Craig, who’d previously tried surrogacy but lost the baby to miscarriage, also tried the adoption process but decided that it wasn’t right for them, admitting: ‘The whole process was quite gruelling,’ Ian said. ‘Rightly so, they delve quite deeply into all aspects of your lives, but basically at the end of the whole process we weren’t guaranteed to have a child.’ To announce their amazing news, the beaming boys posted the cutest animated video (which reminded us slightly of the opening title to the legendary Totally Scott Lee) which will have you in tears!