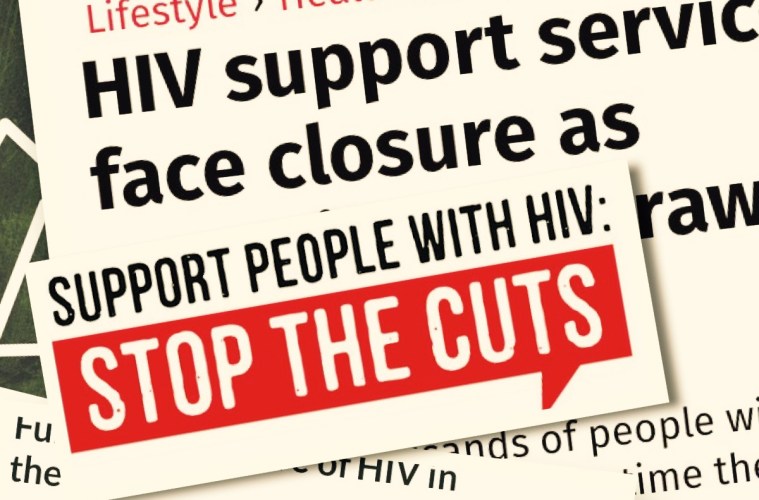 Writer Hadley explains we need to take on the government and fight potential cuts in HIV support services.

The words ‘government cuts’ seem to be part of a newspaper headline every other day. I wrote about the funding cuts, which resulted in the closure of LGBT+ mental health charity PACE in late January. Now I’m taking to my laptop to write about even more funding cuts. This time the axe is falling on HIV services. The news broke last month that local funding cuts would result in the closure of fundamental community HIV services.

Since the news was announced, dozens of charities, organisations and individuals have come together to challenge the decision. The campaign Stop HIV Cuts has been set up and has seen hundreds of people joining in to try to stop the government’s decision.

Stop HIV Cuts have also been able to demonstrate just how important these services are to the individuals who use them. According to the campaign, doctors have stated that 90% of their patients cope better with their diagnosis of HIV thanks to the support they receive from these local services. Which just goes to show how many people are using and need such services.

Although attitudes surrounding HIV have changed considerably over the years, the stigma and lack of knowledge still sadly remains. Many people don’t understand how HIV can be transmitted, nor do they fully appreciate what being diagnosed with HIV means.

With rapid developments in healthcare, being diagnosed with HIV is no longer seen as the ‘death sentence’; though the association between HIV and death still seems to fill the minds of many and fuels the stigma and fear that is found around HIV.

Equally, the media have a lot to answer for. I’m still shocked at how many times I’ve read a news article that incorrectly uses the term ‘AIDS’, instead of ‘HIV’. Acquired Immune Deficiency Syndrome (AIDS) is a syndrome which is caused by the HIV virus.

With early diagnosis and medical treatment, those who are HIV positive can go on to live a normal, healthy life. It’s no surprise that many are concerned by the closure of HIV services, given that they play a vital role in the early diagnosis of HIV and support people with taking their treatment.

This lack of awareness on the part of the media and the general public, only goes further to reinforcing the stigma around HIV. According to Stop HIV Cuts, last year 18% of people living with HIV felt suicidal because of their HIV status. Again this shows just how important these HIV services are. Not only are they providing support for their service user’s physical health, but they also play their part in supporting the psychological effects of receiving a diagnosis of HIV.

So what can you do about this? Well very simply, you can go onto the Stop HIV Cuts website and find out how you can get involved. You don’t have to be living with HIV or even know somebody who is to get involved. Something that I think we all need reminding is that HIV doesn’t discriminate – anyone can be affected. One day you might need to take an urgent HIV test.

Perhaps some of you reading this may have gone through this experience and all the angst that accompanies it. You were fortunate to have local HIV services to support you through this process, but we all might not be so fortunate in the future. Don’t forget that. Support the campaign today.