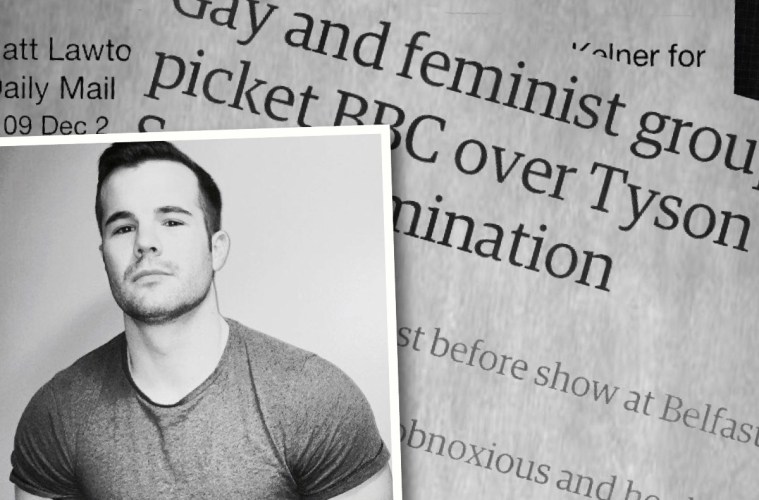 As an openly gay athlete, I really have to question how boxer Tyson Fury could still be shortlisted for the BBC Sports Personality of the Year Awards, following his disgraceful and inflammatory comments about women and homosexuals.

For those of you not familiar with this individual’s prehistoric comments, Tyson said in a newspaper interview that he felt that the end of days was approaching. He said that the devil would be summoned when paedophilia is legalised, completing what he described as the satanic trinity, the other’s being abortion and homosexuality.

‘We live in an evil world, the devil is very strong at the minute, very strong, and I believe the end is near,’ he said. ‘The bible tells me the end is near. The world tells me the end is near. Just a short few years, I reckon, away from being finished.’ He added: ‘Abusing the planet, the wars in the Middle East, the famines, the earthquakes, the natural disasters, all these things are talked about 2000 years ago before they even happened. Prophesised. So now it’s all coming true. There are only three things that need to be accomplished before the devil comes home: one of them is homosexuality being legal in countries, one of them is abortion and the other one’s paedophilia. Who would have thought in the 50s and 60s that those first two would be legalised?’

What he’s said is disgraceful. And these comments will inevitably give young athletes the impression that homophobia is not only considered okay but an acceptable part of sport.

As an openly gay athlete who’s competed in both rugby and bobsleigh, I’m aware that homophobia is massive issue within the sporting world and is something I have actually experienced myself to the point when I questioned my own participation in the sports I love.

I commend fellow athletes like Greg Rutherford for speaking up against Tyson’s comments as well as the unified outpouring of disapproval from the community as a whole, as this will do a small part in discrediting such bigoted comments.

The BBC needs to realise that sportsmanship is a fundamental part of being a ‘Sports Personality’. That not only should an athlete be judged by their on-field performance but on how they act off the field too.

Tyson Fury clearly does not embody this characteristic. The Olympic charter itself has only recently been changed in order to prevent discrimination based upon one’s sexual orientation, yet by the BBC’s definition, his nomination is not affected.

I encourage – no implore – the BBC to revoke Tyson Fury’s nomination for the Sports Person Of The Year awards because he does not embody what is accepted as characteristics of a sportsman.

The BBC are also in a position to show the world that these comments are not only unacceptable but have no place in today’s society and by taking away his nomination they would be making a great stand against hatred and discrimination in the world today.