Israel Folau – do us a favour and shut the f**k up! 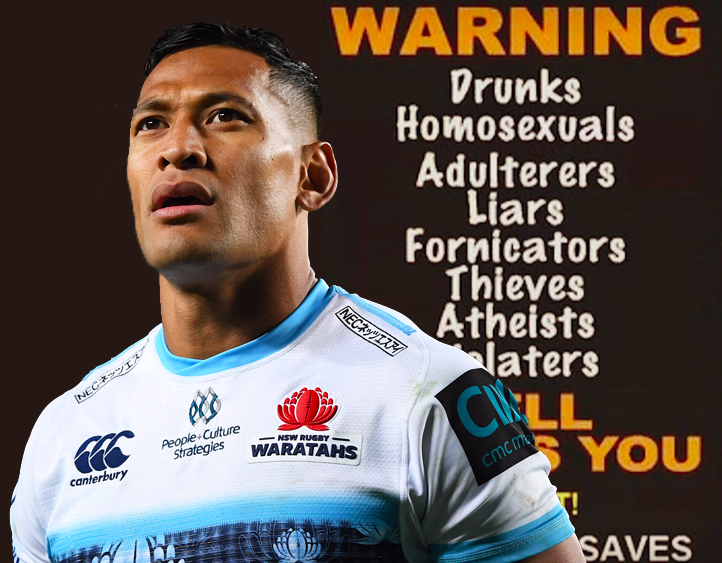 Oh dear! It looks like Israel Folau got out of the wrong side of the bed again as the Shrek tribute act is once again banging on about how the LGBTQ community are to blame for bad things happening in the world. This time, he’s saying the gays are responsible for the deadly bushfires which have killed six people and destroyed nearly 500 homes in Australia. Yawwwwn.

The rugby meathead, who was fired from his team earlier this year after spouting even more mindless shit about LGBT folk, was speaking to a congregation over the weekend telling them that he believed that the destruction caused by the fires was God’s wrath in response to the Australian government’s decision to legalise same-sex marriages and abortions.

“I’ve been looking around the events that’s been happening in Australia the last couple of weeks, all the natural disasters, the bushfires, the droughts, all these things that are currently happening.

“I’m doing this all out of love, for people to hear this message and hopefully be able to receive it with open hearts and they may come to know the truth of [God’s] word.

“God’s word says for a man and a woman to be together, one man and one woman in the covenant of marriage.

“Look how rapid, these bushfires, these droughts, all these things have come, in a short period of time. You think it’s a coincidence or not? God is speaking to you guys, Australia, you need to repent.”

The meathead continued: “What you see right now in the world is only a little taste of God’s judgment that’s coming, it’s not even a big thing.”

Oh Israel, you musclebound imbecile. If you have to take anything away from the bible, surely it should be to love one another and not spread hate. Would God really want you to be inciting all manner of hatred toward your fellow man? Probably not. From what we remember of going to church, we were always encouraged to show each other the sign of peace, not stab them in the heart!

Why do LGBT folks getting married bother you so much? How on earth does two men or two women coming together to enjoy starting a life together actually effect your day to day?

By whipping other bigots into a foaming frenzy about how God is punishing the world because all people are being given the chance to live freely, all you are doing is making the world – a world that God made – a very hateful place. And that’s dangerous. Let’s not forget that the bible – if we’re using it as a blueprint to life –  also said that God made people in his own likeness – so that’s people of backgrounds, cultures and sexualities were talking about. So all you’re doing is marginalising and heaping hate on men and women who are a part of God. Also let’s remember that the Bible was written many moons ago, when times were less accepting as they are now. So why would you even use such an out of date story to live your life by. Frankly, it’s madness.

Now Israel, the best thing I think you can do right now is do us all a favour, and shut the fuck up!