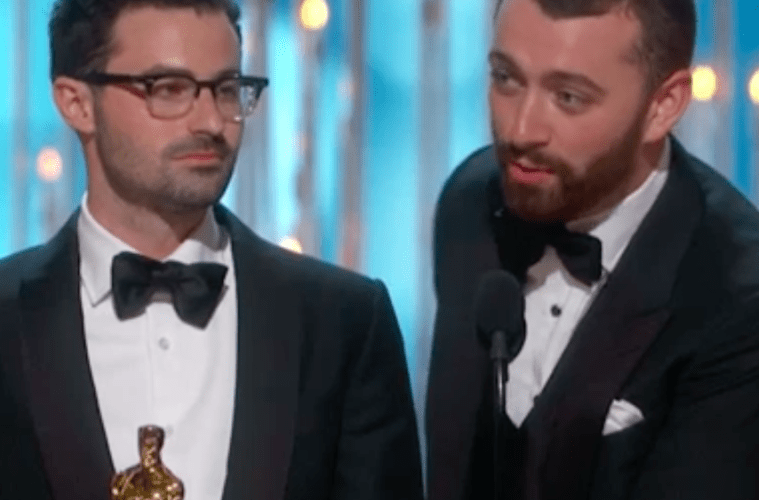 Yay! Our good-luck-at-the-Oscars wishes must have worked its magic as Sam Smith and his gorgeous co-writer Jimmy Napes bagged the Best Original Song gong at this year’s ceremony.

Their stunningly haunting tune The Writing’s On The Wall beat out songs from Fifty Shades Of Grey to scoop the prestigious award. 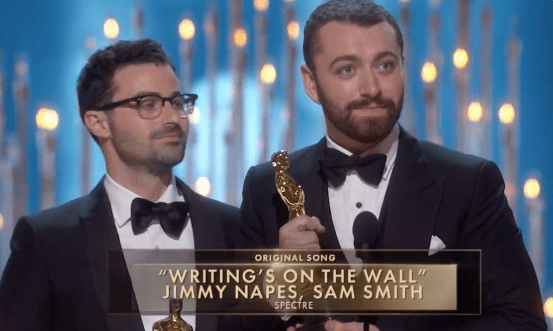 As he clutched his golden statuette, he said: ‘I read an article a few months ago by Sir Ian McKellen and he said that no openly gay man had ever won an Oscar, and if this is the case, even if it isn’t the case, I want to dedicate this to the LGBT community all around the world. I stand here tonight as a proud gay man, and I hope we can all stand together as equals one day.’

However, it would appear that Ian was referring to openly gay actors and Dustin was fast to point out on Twitter that he too had won an award for Best Screenplay for the movie Milk.

In a response post on Twitter, a peeved Dustin wrote:  ‘Hey [Sam Smith], if you have no idea who I am, it may be time to stop texting my fiancé.’ Ouch!

Hey @SamSmithWorld, if you have no idea who I am, it may be time to stop texting my fiancé. Here's a start: https://t.co/8hGTRtIaMK

Wha on earth could Dustin be referring too!

When Sam got back stage a journalist pointed out his error to which Sam graciously conceded he was wrong. Let’s hope these boys kiss and make up soon!

READ OUR DEFENCE OF SAM HERE