OMG! You’ll never guess what Zac Efron did next? 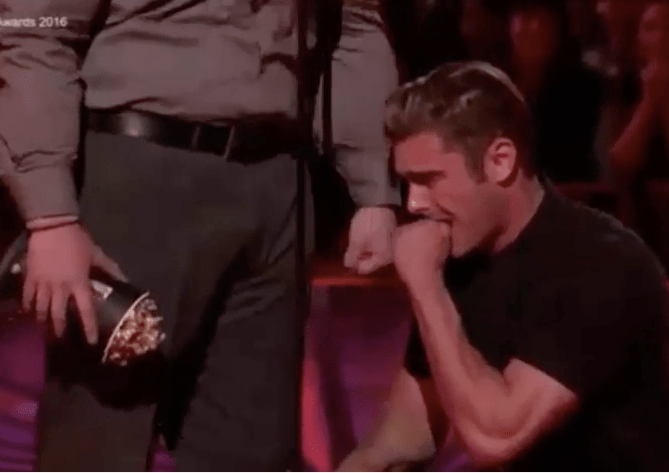 We love Seth Rogen at GuysLikeU, we really do. We like his beefy bod, his curly locks, his shaggy beard and we absolutely love the fact he can make us hoot with laughter.

So imagine how shocked we were when he saw him stroll out on stage with Zac Efron at the MTV Awards all buffed up and bulging out of his shirt.

Before we could work out what had happened, Seth said to Zac:  ‘What did you do to my body? You are all muscley and you’re hilarious at the same time and it’s not fair! It’s messing with the formula so I had to adapt, brother, by putting any substance in my body I can get my hands on!’

Zac, whose breathtaking bod has been getting beefier by the day, teased back, ‘Seth, I’m going to be honest with you man, I thought you looked great before! I’m really sorry you put yourself through this.’

But his apology wasn’t enough for Seth. He wanted Zac to do more. ‘You know who you should be apologising is my testicles because they’ve shrunk to essentially nothing.’

Sinking to his knees, so that he was eye to, er, with Seth’s crotch, Zac muttered: ‘Seth’s testicles, I’m really, really sorry.’

But his Bad Neighbor co-star said his ‘lads’ weren’t willing to accept that grovelling apology. ‘Well, they don’t forgive you, Zachary,’ Seth replied. ‘They will never forgive you!’

Luckily the whole hoo-ha was just a skit and the fellas are still mates. Phew! And Seth? No he had;t lost what we loved him for most! That beef was all padding – so his delish cuddly body is still intact! Awww!