OH MY GOD! Look who joined Jason Donovan on stage! 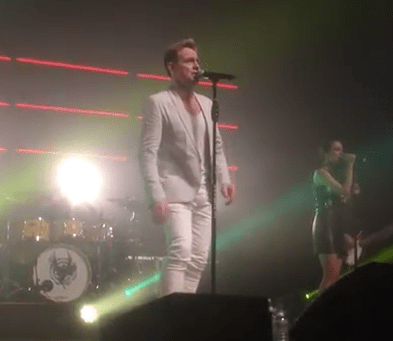 If you like sexy pop singers from the past you’d have been in your element at Jason Donovan‘s Ten Good Reasons show at the Hammersmith Apollo last night.

Midway through the sparkling retro show, which saw the one time heartthrob belting out dazzling SAW anthems like Every Day, When You Come Back To Me and more, Jason was joined on stage by a certain Mr Gary Barlow to sing  Take That’s Back For Good. Unsurprisingly, there wasn’t a dry gusset in the house and as you’ll hear from he clip below, the sounds of screams were deafening.

Elsewhere in the show, the Aussie star thrilled fans with his greatest hits (minus, strangely, Another Night and Hang On To Your Love). We were particularly giddy when he sang All I Wanna Do Is Make You Mine, the B-side to Especially For You, album tracks Like It Was Yesterday and You Can Depend On Me.

Meanwhile, Jason threw a bit of comedy shade at Adele at his O2 Indigo gig on Saturday, joshing: “She may have a Grammy and an Oscar but she doesn’t ave 23 Smash Hits Awards!. And hs has never won Best Dressed Man Award years in a row!’