Jonny Benjamin: ‘We have to stop ignoring male suicide – it’s a serious problem’ Congrats to mental health campaigner Jonny Benjamin on receiving an MBE. In this stark interview, he explains why kids at school need more education about mental health issues and why we need to talk more about male suicide…

Once upon a time, conversations about mental health were rare. People were just too scared to talk about issues of the mind. It just wasn’t what we talked about. And yet, more and more people were being diagnosed with mental health conditions everyday and the number of suicides, particularly in young men, continued to grow.

However, over the past couple of years, we’ve seen a definite shift in the way these issues are being addressed. More and more conversations are now taking place and the stigma surrounding these conditions are being broken down as people of all ages are given platforms – such as GuysLikeU – to open up about their experiences and assuring those still living in silence that they are not alone in their struggle.

And for much of this surge of awareness, we have the mighty mental health campaigner Jonny Benjamin to thank. Not that he’d agree or take any credit for it. But when he came forward to tell the heartrending story of living with schizophrenia and his attempted suicide back in 2013, he became something of ‘the poster boy’ for mental health.

For the first time, the nation saw the real face of a person living with a condition. And it was the face of an articulate and handsome boy next door who spoke simply about his experiences, immediately demystifying those preconceived and misinformed ideas we all had of people living with mental health issues.

Earlier this year, Jonny, 28,  told GuysLikeU why these workshops are so important and how they can potentially save lives, plus Jonny, who is to receive an MBE, opens up about how life for him has changed since his #FindMike campaign.

So Jonny, tell us about these workshops.

The workshops are about finally getting mental health into schools and onto the curriculum. We have physical health on our national curriculum, but not mental health. And yet 75% of mental illness begins in adolescence so it doesn’t make sense why it’s not in education already. So we want to break the silence and stigma around mental health, create a safe and supportive environment in which young people can talk and ultimately signpost them to where they can get help should they need it.

Do you think these workshops will ultimately save lives?

Potentially. Perhaps someone later in life who’s really struggling will remember the workshop and our message that ‘it gets brighter’ and go and seek help. Or they even spot the signs in someone else after doing the workshop. It’s not learning about helping yourself but being there for others too.

Why do you think teaching about mental health in schools has been ignored for so many years?

Perhaps people are scared of it. I think some people worry that just by talking about it it can put ideas in people’s heads, particularly younger people. But that’s not the case at all of course. The younger we start people talking about it the easier it is it will be to get help and support, and the less shame and embarrassment; if and when problems do occur.

You started showing signs of schizophrenia when you were ten, but only diagnosed years later. Do you think if you’d had lessons at school you might have questioned your well being earlier?

Yes. Most definitely. I didn’t know what mental health was. No-one even mentioned those two words to me growing up. I wish someone would have done. Just a five minute conversation could have made a huge difference. I really do think I would have got help earlier and been less embarrassed to talk about it had I had any sort of mental health education at school.

In fairness stigma surrounding mental health seems to getting chipped away largely because of you. Is there still a long way to go.

I think there’s lots of people making a difference – there’s so many people standing up and talking about it now. But yes, there’s still a long way to go. I think we need to make mental health equal with physical health. It’s all just ‘health’ after all. But we separate the mind and body. Yet our brains are no different to any other organ such as the heart. We’ve got some time to go though till it’s seen that way. Do you find it easy to balance being this ‘face’ of mental health with your own personal health?

Sometimes I get so caught up in what I’m doing I forget to look after my own mental health. And that’s a problem. I think I’m at that stage right now.

In what way? How are you doing?

Struggling a bit. But that’s fine. I just need to get my mental health back on track and I will. Having some time out and going somewhere to recharge like a long walk out of London in the countryside seems to really do it for me.

What are the most commons conditions  young guys find themselves dealing with?

Anxiety, depression and stress are the most common ones.

How are they normally dealt with?

Sadly they are often still hidden. But when a young person does open up there should be support around them from the school, the NHS and loved ones. In the case of schools and the NHS it’s sometimes not happening and this is a serious issue we need to address urgently. Too many young people are being let down by the system that should be looking after them.

If someone suspects they have some kind of issue what should they do?

Don’t be afraid to talk them. Sometimes it helps to bring it up on a day out somewhere for instance rather than sit down and have a serious conversation with them. Often people will close up when that occurs. But everyone is different of course. Sometimes they won’t open up but don’t give up trying. Just letting them know “you’re here for them, when they’re ready” might sound cliched but it can have a lasting impact.

The rates of male suicide are still so staggeringly high. Why do you think men are particularly prone to suicide! It is societal or upbringing?

Society has a lot to do with it. Thirty years ago or so it was the same with cancer. People were afraid to mention the ‘c-word’. Nowadays it’s completely different. The same needs to happen for the ‘s-word’, suicide. We’re sweeping it under the carpet at the moment and pretending it’s not happening. But we have to stop ignoring it, realise it’s a massive issue and address it already! That means talk about it. All of us.

If someone has suicidal feelings how can they deal with them best?

Talking. This doesn’t even have to be face to face. The Samaritans have an email service I’ve often used and you’ll get a response soon after. However you do it, talking can absolutely relieve the suicidal thoughts and feeling you may have. The important thing to remember is that those thoughts and feelings are temporary. However intense they may be now they will always pass.  Guaranteed. 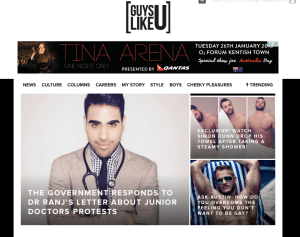