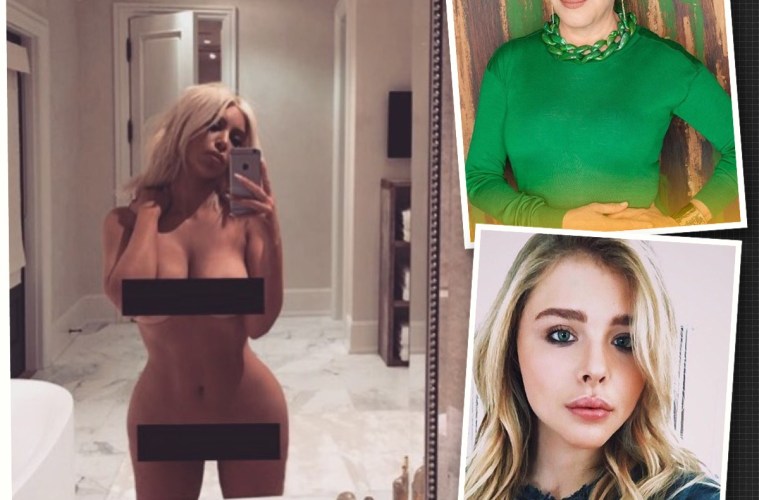 Hold on to your hairpieces, bitches, Hollywood is at war. And it’s looking ugly!

Reality star Kim Kardashian has launched an attack on actresses Bette Midler and Chloe Grace Moretz after they dared to comment on her attention-seeking nude pictures that she posted on social media this week.

When you're like I have nothing to wear LOL

Amused (and appalled?) by the reality star’s attempt to make headlines, singing and acting legend Bette hilariously tweeted, with tongue firmly in cheek: ‘Kim Kardashian tweeted a nude selfie today. If Kim wants us to see a part of her we’ve never seen, she’s gonna have to swallow the camera.’

Missing the humour in the post, Kim lashed back at the talented legend, whose career has spanned over 50 years:

Shortly after that, uber talented actress Chloe Moretz joined the fray and retweeted Bette’s comment and raised the very valid point that high profile ‘role models’ such as Kim should think twice about posting nude snaps, commenting: ‘I truly hope you realise how important setting goals are for young women, teaching them we have so much more to offer than just our bodies.’

Ignoring the empowering sentiment behind the comment (and seemingly unaware that her fanbase is made up of young girls and dirty old men), Kim, who found fame after appearing in a sex tape, responded with a snipey tweet: ‘let’s all welcome  @chloegMoretz to twitter, since no one knows who she is. your nylon cover is cute boo’.

Kardashian’s army of fans were quick to accuse Chloe of ‘slut-shaming’ the reality star, to which she calmly and eloquently replied:

Kim, whose show Keeping Up With The Kardashians attracts an average of 200k viewers in the UK, went on to brazenly tweet a message which implied she’d paid off her husband Kanye’s supposed $53 million debts.

Then, in case we hadn’t seen it all already, Kim posted yet ANOTHER naked photo online with the hashtag ‘#liberated.’

Then Piers Morgan stepped into the spat and wittily replied to the post about her having no clothes to wear: ‘I know the old man’s $50 million in debt, Kim – but this is absurd. Want me to but you some clothes?’

I know the old man's $50 million in debt, Kim – but this is absurd.
Want me to buy you some clothes? https://t.co/hEA9osB2QF

Wow! Some battle, right? We never thought Kim had it in her. Or was it angry Kanye who got a hold of her phone? Who knows, but we love a good Hollywood bitchfest! Miaow!

So what do you think about Kim Kardashian’s reaction to Bette, Chloe and Piers’ comments? Whose side are you on?

Are you one of the very few viewers who watch the show in the UK?

Do you understand why she is a global phenomenon?

Hell, have you ever heard her speak?

Do you agree with Bette, Chloe and Piers?