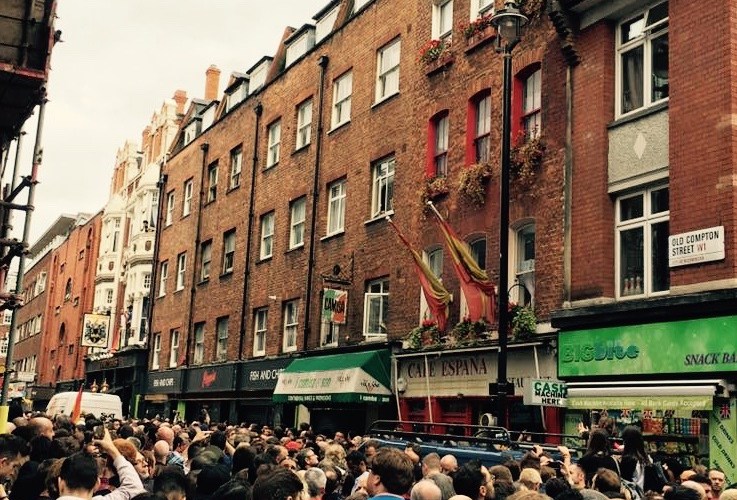 Today the gays of London came together to pay tribute to the 50 young people killed at the Pulse nightclub in Orlando. Here, regular contributor Hadley talks about how this dreadful experience has affected him.

I’m proud to be gay. A pride which has been amplified by the scenes from Soho this evening. Hundreds of LGBT people and allies stood hand-in-hand, in order to remember the lives lost in Orlando. An act of terrorism in any country, against any population or group, is simply devastating. Acts attempting to destroy our daily lives, our identity and our hopes for a better world. The killing of 49 innocent people in a gay nightclub is an attack on LGBT people. This is not about ‘taking ownership’ of this atrocity; it’s about calling out the homophobia which motivated an individual to murder, injure and destroy lives.

A gay nightclub represents more than just a place to have a good time. The four walls of any LGBT venue, symbolises freedom of expression and most importantly, love and pride. In a gay nightclub we’re meant to be able to be who we are, without fear of judgement, prejudice or violence. Sadly, the four walls of the Pulse Nightclub, could not protect anyone from one individual’s actions.

We are all in a state of shock. It could have been any of us. It could have been any of our friends. This time it was in Orlando, where next? Thoughts which are casting dark clouds over a time of Pride celebrations across the world. Pride celebrations which are often greeted by questions around why we still have them in the first place. Quite simply, our work is not done. Yes we now live in a country where we can get married, but a change in the law, doesn’t necessarily mean a change in attitudes.

Homophobia is still present in this country and across the world. Unfortunately, this latest attack is a terrifying reminder of that. If an individual can see two men kissing and then go on to commit such an attack, this goes to show how much more work is left to be done. Equally, the fact that certain people within the British media failed to recognise this attack as a hate crime against lesbian, gay, bisexual and trans people, demonstrates a severe lack of understanding around this issue.

As mentioned by the journalist, Owen Jones, if this had been an act of terrorism against a place of worship, it would have been recognised as a hate crime against a certain religion. Yet when somebody shoots dead 49 people in an LGBT venue, it is not viewed as an act motivated by homophobia?