Mrs Moore marks the anniversary of the Admiral Duncan bombing 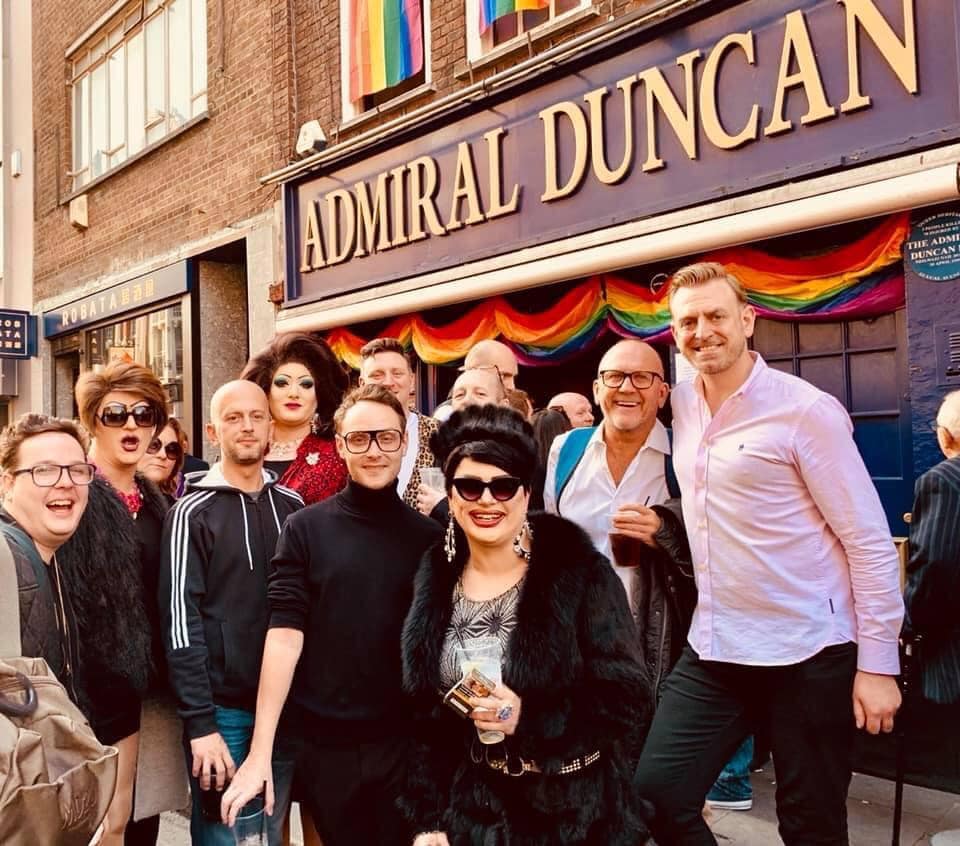 One of the UK’s best loved drag queens, Mrs Moore, looks back at the tragic day three people lost their lives and 79 people were injured in one of the most horrific homophobic terroristic attacks in London.

Today – April 30 – marks the twenty-first anniversary of the homophobic attack on the Admiral Duncan pub, in the heart of London’s Soho.

It was a warm and sunny Friday night in 1999 and giddy workers from the local area were piling out of their offices to enjoy some pre-Bank holiday revelry. Shortly after 6.35pm, a suspicious looking bag was spotted in the Admiral Duncan and reported it to staff. As there had been two terror attacks in Brixton and Brick Lane on the previous two weekends, bar staff were about to call the authorities. However, before they could, the bar was ripped apart as the nail bomb in the bag exploded, blowing the building apart and sending patrons flying through the air.

Three people – John Light, 32, Nik Moore, 31, and Andrea Dykes, 27, (who was four months pregnant) lost their lives – while another 79 were hurt, some of them suffering horrific life-changing injuries.

Shortly after the attack, a 22-year-old Londoner, who had been a member of the far-right British National Party, was arrested, charged and eventually given six concurrent life sentences for the atrocities he committed.

Now 21 years later, we take a moment to look back at that tragic day and pay tribute to those who lost their lives and those who had their lives changed by the horrific events.

GuysLikeU caught up with Duncan regular Mrs Moore – aka John Moore – who remembers the tragic events with vivid detail.

“Back then, Comptons, Brief Encounter and The Admiral Duncan were the gay bars I drank in regularly,” John says. “At the time I was a young virginal 18 year old who had just started working as a flyman in Miss Saigon at the Theatre Royal on Drury Lane so would often pop in to the Duncan for a pint or vodka and lime – classy, I know.

“It was always a such a welcoming, a place venue where you could have a drink and maybe a chat with a stranger or have a flirt or a cruise! Gosh, I do miss the days of cruising and flirting in bars, as opposed to the modern day dial-a-shag generation. The Admiral really was a place full of what I would call real people. It wasn’t pretentious and there was and still is always a good mix of people of all ages.”

21yrs ago today, a nail bomb was detonated at the Admiral Duncan pub in soho, which killed 3 people and left 79 others wounded. We have a duty to remember those we tragically lost, to show our ongoing support to those still affected by the attack today, and MOST importantly to educate the next generation to help eradicate homophobia & hatred! ❤️🧡💛💚💙💜 . #admiralduncan #soho #rememberance #homophobia #gaysofinstagram #singlegay #gayuk #gayman #bears #gay #lgbt #gaymen #bear #gaybears #bearscubsnbeards #stockybears #bearsofinstagram #gaylife #beardedgay #beardedhomo #instabear #instagay #instagayguy #instadaily #instagood #photooftheday #daddybear #gaydaddy

The night the bomb went off, John was at the theatre but was concerned that his boyfriend at the time may have been caught up in the blast!

“I will never forget when I heard about the attack,” he tells us. “I had just finished the pre-set for the evening performance of Saigon and Jill Hudson, our much loved and much missed stage door keeper, told me that there had been explosion at the pub.

“We could hear sirens of police and ambulance heading towards Old Compton Street. I was in a right state because I knew my partner at the time had been in Old Compton Street. I frantically tried to call him but couldn’t get an answer from him. I was so panicky and couldn’t concentrate so they sent me home from work.”

"The moment I wake up, before I put on my makeup, I say a little prayer for you". 21 years and the the pain doesn't lessen, it still only feels like yesterday I last saw you smile. I love you and miss you. See you all in my dreams ❤️💙💙💙 #admiralduncan #imissyoualways #sohobomb #21years #thisdaynevergetseasier #seeyouinmydreams

John continues: “For the next few anxious hours, I sat indoors scared as I still had not had any contact from my partner. Then around midnight he came through the door, his clothes ripped and covered in blood. He told me the he had been in the Duncan having a pint when he decided to cross over the road to get his hair cut. While he was in the chair the bomb went off, so he and everyone else went to help the people who had been injured.

“He was so shaken as he spoke and he told me that he had seen sights that no-one should ever have to see. What he described to me was just awful and would never want to repeat. Then we just sat holding each other as watched the news on the telly.”

The devastating explosion sent ripples throughout the gay community and John, like many, was compelled to visit the scene of the blast days later to pay his respects to these who died and who had been injured.

“I went to lay flowers outside the Duncan,” he recalls. ‘I’d never done anything like that before but something inside of me said I must. I remember the mood was obviously sombre and people walking around were visibly upset. They were in shock and were full of disbelief. Were they angry? I’d say more devastated.

In spite of the heartbreaking situation, John remembers the community spirit warmed him. “It was nice to see everybody coming together as a community, all of us standing as one,” he says. “On the Sunday after, people gathered in Soho Square to remember the dead and the injured and the choir sang Something In Side So Strong, which is a song that still means so much to me when I sing it in my shows.”

John, like many, refuses to repeat the bomber’s name, and says he believes that the animal deserves more punishment than the six concurrent life sentences he was given.

“I hope the racist homophobe rots in jail,” he says defiantly. “He’s a sick and twisted individual who should never be allowed to harm innocent people ever again just because of who they are and because he didn’t agree with who there are.  I really don’t want to say anything more about him.”

John says that he is sad that the Coronavirus has stopped the gay community coming physically together today on Old Compton Street to mark the anniversary.

“I am saddened that the community cannot be together to remember Andrea Dykes, John Light and Nick Moore and all those that were injured,” he says, adding, “But we will never forget you. And we will never forget ‘Sinders’, the manager who survived the bombing but was so cruelly taken from us in a vile homophobic attack. My thoughts and my heart is with you all today.”

As people are not able to meet, an online event of commendation has been set up. Those that register with us will be sent an email on the 30th April (after 12 noon) with instructions how to join us for a ZOOM Act of Remembrance. For more information visit our national website: