“I felt like I deserved my HIV diagnosis – but I was wrong!” 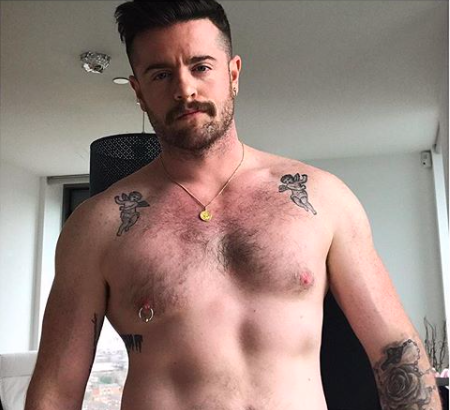 In part three of our frank interview, Steven relives the moment he discovered his HIV status and how he eventually found his self-confidence.

Part One: Steven opens up about how hard it was to find the courage to come out, meeting his two Daddies and what life is like during self-isolation.

Part Two: Steven explains how he fell into the fetish scene and met some of his best friends.

It’s officially pride season so I thought I’d share this wee gem with insta. 📸 by @leeedwardphotography for @iamproudphoto look after each other this pride season kids 😘

Steven, you were diagnosed with HIV when you were 24….. Had you always been safe?

My attitude towards my sexual health at the time was abysmal. In my early twenties my low self-esteem influenced many bad decisions including disregarding my health in many areas. I had very little knowledge on sexual health in general, combined with a lot of partying meant I was making pretty reckless choices sexually.Prior to this test, I hadn’t had any form of sexual health check in over two years.

How was it hearing the words you were positive?

I eventually decided to have a test and week later I received a call from a nurse who said to me in a soft voice ‘we need you to come in ASAP to discuss the results from last week’s tests.’ In spite of sporting an intense shade of bronze from last night’s fake tan application, I ran down to the clinic where a friendly nurse sat me down in a room to tell me the words I’d kind of expected to hear. When she spoke, it sounded like she was talking in slow motion. My first fears were ‘I hope my ex is ok’. We had hastily split at the time and I really missed his friendship, but I think that moment started a disregard for myself that would prove destructive as I got older.

The legs are oot! I dunno how you kids can fit yourselves into a selfie without causing cramp 😂 hope you’re all enjoying the Easter weekend #Easter #legday #moustache

Did you feel like  it was the end of the world?

The nurses were incredible. They assured me that this most definitely was not the end of the world. They very coolly explained how the virus affected my immune system and that with the right treatment I had every chance of living a long and  healthy life.

How did you feel once the news had settled in??

I felt deep down that I deserved it for being irresponsible, a crazy logic that I’ve had to go back and try to remove. I can see now how how the diagnosis confirmed a core belief of mine, that had been brewing since I was a kid, that I was a bad boy who deserved to be punished. Ironically I can now also see why I love whips and restraints so much.

Were you nervous about telling your family about your diagnosis?

I was lucky to have my ex-boyfriend  by my side from the minute I left the clinic. Apart from him and a close colleague at work I kept my news to myself for over a year. I needed time t deal with it  but it became obvious that my life had changed. I am so fortunate to say that I’ve never faced any hostility whilst revealing my status.

Clapping or praying? Whatever I’m doing I’m very grateful to say goodbye to the week feeling healthier and clearer than I have in months. And What better way to end a shite week than with the super talented and proper lovely @dpalli_ had such a chilled afternoon working with him… and I kept my top on 😜 #gratitude

When did you take control and deal with your diagnosis. How long did it take before you were in charge and optimistic again.

I think my relationship with my diagnosis has changed a lot over the years. I think the initial acceptance of it was mixed with a lot of denial and self punishment. That aside,  I’ve since been increasingly open about it and don’t tolerate stigma from others. I’d say the only stigma I’ve knowingly faced over being HIV+ has been from me.

What would you say to someone who has recently been diagnosed and is freakng out about it?

My advice to anyone thinking about disclosing their status is ‘do what’s right for you’. With disclosure comes responsibility to possibly comfort and even educate who you are telling.There’s so much I could say but I hope that my sharing this helps people take guidance from my mistakes. Being HIV+ does not make you a ‘bad’ person regardless of how you contracted it. I think the most fundamental advice I can give is something I was told early on, “Own your diagnosis, do NOT let it own you.”

Oprah says (and we know she’s right) if you’re not getting what it is you were put here to do, the universe will keep nudging you until you get it. For Some people it takes a few gentle taps others need a run in with a brick wall😂 when ever you get what it is just do that, do your thing 🙏🏻 #trust #oprah #deep #haveagreatday 📸 @manelortega

Has your diagnosis ever stood in the way of meeting new people?

In the very beginning it did affect relationships. I found it very hard in the beginning to laugh and gossip about the most recent episode of TOWIE when I was concealing such big news. When it came to sex it was tricky in the beginning. I would either chicken out of sex through fear of disclosure or when I did have the balls to be honest, I would find myself suddenly ‘ghosted”. This led to me being a lot more open about my status over time. I am now so much more clued up about my sexual health and due to treatment I’ve been undetectable for over four years. It’s a part of me that I cannot change and if someone doesn’t want to engage with me in any way because of it then they are not worth my time. As we would say in Scotland, being open about your status results in ‘sifting oot the shite’.

Part One: Steven opens up about how hard it was to find the courage to come out, meeting his two Daddies and what life is like during self-isolation.

Part Two: Steven explains how he fell into the fetish scene and met some of his best friends.