“To me, the fetish world is family – I’ve met my best friends on the scene” 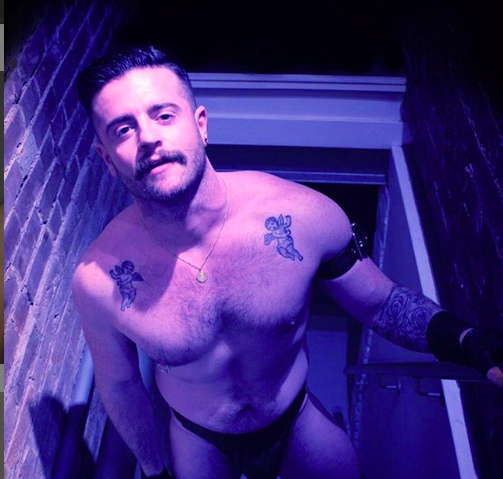 In the second part of our frank interview with Steven, he explains how he fell into the fetish scene and how he has been challenged with body issues.

Steven, when you were younger, what kind of guys were you into?

During my teens and early twenties I don’t really  remember pursuing a ‘type’. I was running on very little self-esteem at the time  and A LOT of alcohol. I had a varied selection of suiters. I’d say my preferences have subsequently grown and developed as I’ve got to know myself better.

Were you in interested in finding the one or were you keen to be have fun ?

With hindsight, I just wanted to be loved. I once had a very unhealthy relationship with an older guy for a few years then met a lovely teacher when I was 22.

These days you’re in a relationship with your two Daddies and you all enjoy the leather scene. Were you interested in fetishes at this point?

I was not really exposed to leather or any other fetish until I was about 25. I bought my first harness a few years later after persuading someone to let me try theirs on at Brighton pride. But I didn’t pluck up the courage to wear it until accidentally stumbling into a leather night a year or so later – I had drunkenly decided that was the time to wear it.

When you were properly out, did you throw yourself into the scene. What kind of circles were you mixing in?

Once I had thrown on my harness and leather shorts (that had also never seen the light of day) I headed back to the monthly leather night that was held in Brighton. Before this, it had felt like this mythical event that I was too terrified to attend.  Standing amongst all these men felt like when I first went to see The Rocky Horror Picture Show at the theatre with a friend and her fabulous mother when I was fourteen. Seeing all these men – some of whom I knew as punters from the bar I worked in part time- dressed head to toe in leather, looking like these amazing Tom of Finland drawings, didn’t seem all that dissimilar to seeing men and women in Aberdeen dressed up in stockings and heels waiting to watch a show about a transvestite scientist and his muscular plaything. I felt instantly at home.

What was it about the fetish scene that you liked most?

I dived right in at the deep end that night. This dashing man head to toe in leather with a proud moustache, asked me if I was into being submissive. At that point my exploration hadn’t gone much further than some dirty power play talk in the bedroom with an ex. Naturally I said yes, promptly. Within half an hour I was on my knees licking his boots. That began my first BDSM relationship. From there, my taste to explore kept growing. I’ve been pretty openminded whilst finding my main kinks and have  pushed my limits. Fetish is about what turns you on, whether it’s uniforms to pup play and everything in between. I remain curious, there’s still so much to explore! The kink for me is ultimately determined by the connection between the guy or group you are playing with.

Is it a respectful welcoming community?

To me fetish is family. I’ve met some of my best friends through the scene. Whether it’s at an event or chatting online. It’s a space where you can embrace and enjoy what turns you on in a safe environment.I understand how the scene can look intimidating, but everyone must dive in somewhere. Most people there are using fetish to access a side of themselves that isn’t reachable in everyday clothes or when having vanilla’ – a term I’m not fond of – sex.  Ultimately its up to you to take responsibility for your own safety but from my experience with BDSM particularly, it’s an exchange that should be built from respect and crystal-clear discussion, communication is fundamental.

Did sex ever become more important than anything else?

Fetish will always be important to me. There have been periods of time in the last few years when I haven’t felt comfortable being sexually active. But I had fetish to help me access that side of myself even when I had been reluctant. I take fetish seriously because it means so much to so many people, in the same way drag does. A superhero uses a cape. A drag queen uses makeup… Accessing our fetish allows us to go where we want to but are often scared to tread.

The gay world is a very varied one… We have monogamous couples, we have fellas who throw themselves into Chemsex parties. Gay men seem to push the limits.  Are you more cautious about the things you do?

Over the years I’ve became significantly more open-minded. I’ve also developed self-respect that was almost non-existent ten years ago. I think the two combined have meant I make much better choices now. We all make mistakes and will continue to do so. It’s about how we can learn from them. As the great oracle Oprah Winfrey says, ‘when you know better, you do better.’

Men tend to find it hard to deal with their own mental health issues – have there been times in your life when things have got too much and you’ve not dealt with it well?

I think my mental health is a journey that I’m going to be on for my whole life. I’m in a really good place mentally compared to 18 months ago but there’s still so much I want to deal with and hopefully overcome. I’ve been to some pretty dark places along the way, considered the idea of suicide a few times, but I’m genuinely happy to have managed to get back up even when that seemed impossible. I am so grateful for where I am now, particularly in the last year as I stopped using antidepressants after four years of daily use. Having incredibly supportive people around me, as well as having five element acupuncture and cognitive behavioural therapy have all helped me get to where I am. But for anyone reading this, at ANY stage of mental healing the one person you always need to thank first is yourself. It is impossible to get better without having the will and determination. Wanting to get better is the key ingredien to recovert, you cannot succeed without it.

You’re a good looking guy have you ever been insecure about the way you looked?

I can honestly say I AM insecure about how I look. I’m constantly thinking, ‘I’m not big enough’, ‘I’m not lean enough’, ‘my arms are too small’, ‘my belly is huge’, ‘my bum isn’t peachy enough’. The list unfortunately goes on. These are thoughts that take up residence in my head daily. Fortunately now I’m learning how to silence these persistent notions.

You look very confident in your pictures  – and have changed so much over the years. Does the way you look determine how confident you feel?

Bottom line… you can change whatever you want on the outside but if repairs need to be done on the inside they will always surface. That isn’t me saying ‘quit the gym, stop getting your hair cut, pizza for breakfast lunch and dinner … There’s no point trying… if you’re not happy on the inside then you’re fucked’.  I can say enthusiastically that the reality is not as rigid. I guess I’m trying to write a disclaimer of compassion on the topic of self-image from my experiences.

So have you constantly tried to change yourself?

Since I was old enough to know what my mum’s hair mousse could do I’ve done a lot in the name of improving my image. I’ve pursued countless diets, applied gallons of fake tan, spent thousands on getting my teeth ‘fixed’ and many more attempts to improve how I look. I’ve spent my life feeling either too fat, not muscly enough and every other criticism in between. And despite disregarding this conclusion multiple times I finally had to listen to what inside was telling me and finding a way to change that. If you’ve ever told yourself that ultimate lie that  ‘you are not good enough’  and believed it, you’re next stop, as difficult as it can seem, has to be self-compassion. Now all that said,  of course how you look on the outside does count to some degree. I’m not ashamed to say I’ve still got loads of body goals I want to reach and there’s so many good emotions to be experienced from those achievements. It’s just that now I’m starting to feel I’m striving because I want to do it for my own pleasure  and not because I need these external attributes to be considered ‘enough’y everyone else. Our appearance and how we feel is such a complex relationship, one I feel  a large majority of gay men including myself will be consumed by at many stages of life.