Nick Bolton: “I tried to tell myself I was bi, before fully admitting I was gay” 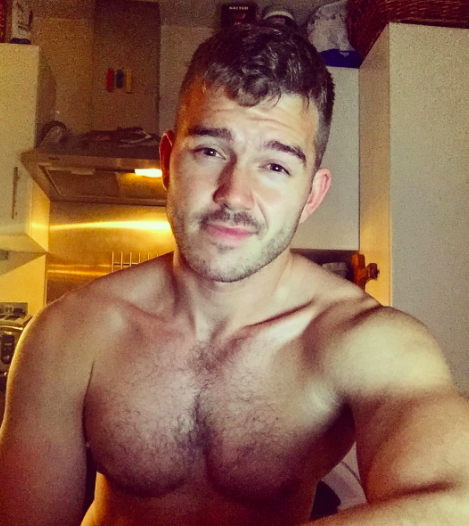 Thirty year old Nick Bolton opens up about coming out, breaking hearts and the superficiality of the gay scene….

Coming out might be easy for some, but how many of us have done that age old thing where we tell ourselves that maybe – just maybe – we might be bi.  Well, meet Nick Bolton, a 30 year old who lives in Hackney, who works in broadcast operations for ITV. He might look pretty sorted and confident now, but once upon a time, he found himself in that very situation where he wasn’t ready to come out not only to others but to himself. Here he looks back at how he finally became the man he is today. In secondary school the lads I hung out with started to talk about how much they liked the girls and I realised I definitely didn’t – and that I was staring at their crotch. But I kept it to myself for about seven years and came out when I was 22. Was it hard admitting to yourself that you were gay? Did you ever wish you were just straight?

Yeah, of course. I think it would have been strange not too. We still live in a society which classes being gay as not being the norm. I denied it to myself for a few years then tried to tell myself I was bi before fully admitting it.

Which gay role models did you admire?

I loved Stephen Fry for being this extremely clever national treasure but also being unapologetically gay. Russell Tovey was someone who made me feel like I didn’t have to a huge personality and could be a regular person and also be gay. Who were you most worried about telling?

My parents. I think they must have realised because they used to tell me and my sister that it would be fine if either of us were gay. However this didn’t make it any easier for me to tell them, because I didn’t fully believe them and still thought they might love me less. But in the end they were amazing about it and we’re still extremely close Aww, that’s so sweet! Who was the first person you told and their reactions?

My dad. He just asked me once and I went red and started crying. After having a breakdown and being reassured that everything was ok I got myself together and carried on with Harry Potter. (N.b. a love of Harry Potter is not a sign of homosexuality). I didn’t tell my sister for another 3 years, I felt that she was less accepting than my parents and I eventually told her whilst she was driving on the motorway. Probably the best time to tell anyone you’re gay as if it goes wrong you’ll probably die and not have to deal with the upset. My sister already knew (further proof of telepathy in my family) and was fine about it.

What was it like being in the closet at school?

School was fine apart from another guy realised he was gay and came out at school and spread a rumour he’d been with one of the people in our class and everyone thought it was me – which it wasn’t. So I got teased a bit for that.

Not really. I think the first time I properly explored the scene was when I lived in Brighton and it was quite fun for a while but I got bored after about six months and moved back to Manchester. I love the gay scene. I think its important to have spaces for gay people because we have been made to feel ashamed of being gay and therefore its nice to have spaces with no fear of that. The gay scene does appear to be dying in London though as alot of places are shutting but I’m sure things will change one day when people get bored of apps and want to socialise normally again. Some say the scene is very superficial…

I think it can be and a lot of us get wrapped up in looking the best we can. I think if you spend your whole life on the scene then you can get caught up in that and think beauty is the route to happiness but I try to not get too involved with it. Life is all about variety. There are several friendship groups of lads that I see around on the scene and they’re all very attractive and muscly and I just think if that’s a pre-requisite to be in your friendship group then that’s pretty superficial and 100% a route to becoming unhappy. Yes. My first boyfriend left me for someone else which was pretty rough. I’ve also recently broke up with someone I loved a lot because I didn’t think we were matched very well and it broke my heart to break his.

Do you think there is too much pressure on finding love?

I’ve never really been too bothered about being in a relationship because you can’t force anything so you’ve just got to see what happens. When the right person comes along things are just easy and it makes sense so you should never try to hard to make a relationship work at the beginning. We think we have a pretty easy time these days. Have you experienced any homophobia along the way?

Yes, actually. Me and my ex would hold hands in the street because I’m a firm believer in never being ashamed of being gay in public and we experienced groups of lads shouting things at us and it’s scary but I’ve never let it stop me from doing so.

How do you normally meet guys?

I much prefer meeting people in real life because you can tell a lot more whether someone is right for you from one minute of chatting in person than a month of online chatting. What’s been the toughest thing you’ve been through and how did you get over it?

Breaking up with people I find to be extremely difficult. I’m very sensitive and empathetic and I found myself staying in a relationship for longer than I should have and it effected my mental health in the end until I had a small breakdown.

Safe sex isn’t taken as seriously as it used to?

Yes, I am very careful. However, like everyone we all have slip ups and make mistakes. I think HIV has become so manageable that people are less scared about it. Also the rise in drug use in London has really caused alot of issues with this I think and that’s scary!