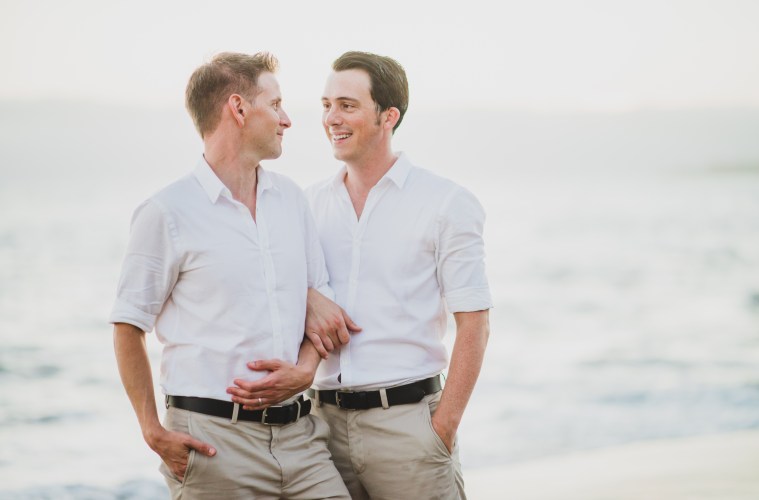 Newly wed actor Nicholas Downs shares memories of his big day and explains why at one point he felt like marriage would never be an option.

Love must be in the air right now, as we’ve lost track of all the guys who have got engaged recently. But falling in love is a wonderful thing, so let’s all be happy for anyone who is lucky enough to find that special someone (even if you haven’t just yet!)

And, of course, with marriage now legal in so many countries, gay men can enjoy their special wedding day just like their friends and family have done for years.

Which is just what gorgeous actor Nicholas Downs, star of the cult gay rom com Is It Just Me?  and his City Planner partner of twelve years Nick Maricich did when same sex marriage was legalised in the US last autumn!

Here, the smitten LA couple share with GuysLikeU their most joyous moment in their lives but explain why at one point marriage didn’t seem like an option.

Congrats on your big day, boys, it looks stunning.

Nicholas Downs: Thank you so much. We had a wonderful day and everything went exactly as we had planned it, and, in some ways, it was even better.

Nick Maricich: It was so full of love and we were surrounded by our closest friends and family.

Before you tell us about it, take us back to when you first met.

Nicholas Downs: I was about to start shooting a film and at the last minute it got postponed a week. So I decided to go out with my friend to let loose a bit and blow off some steam. It was a dance club in Hollywood. In a common ‘chill out’ area is where I first saw Nick. We made ‘eyes’ with each other for a bit…

Nick Maricich: And then I walked over to introduce myself to you…

Nicholas Downs: (which I very much liked). We talked about all kinds of things that one usually does not talk about at a club: fishing, camping, hiking, etc. We both left that night with the same feeling–

Nick Maricich: We had met the one.

So the big day. Tell us all about it.

Nicholas Downs: It was on the beach in Palos Verdes, California, where Nick grew up. The weather was perfect, it was with the people we love the most and the day was just magic.

Nick Maricich: It had been a long time coming actually, seeing as we’ve been together for 12 years. So for us this was just the icing on the cake, so to speak.

Was the ceremony as emotional as you expected it to be?

Nicholas Downs: We’d both say even more so. We had some inkling that it would be filled with joy and emotion but when you’re in it, it’s even more than you imagined. It’s euphoric. 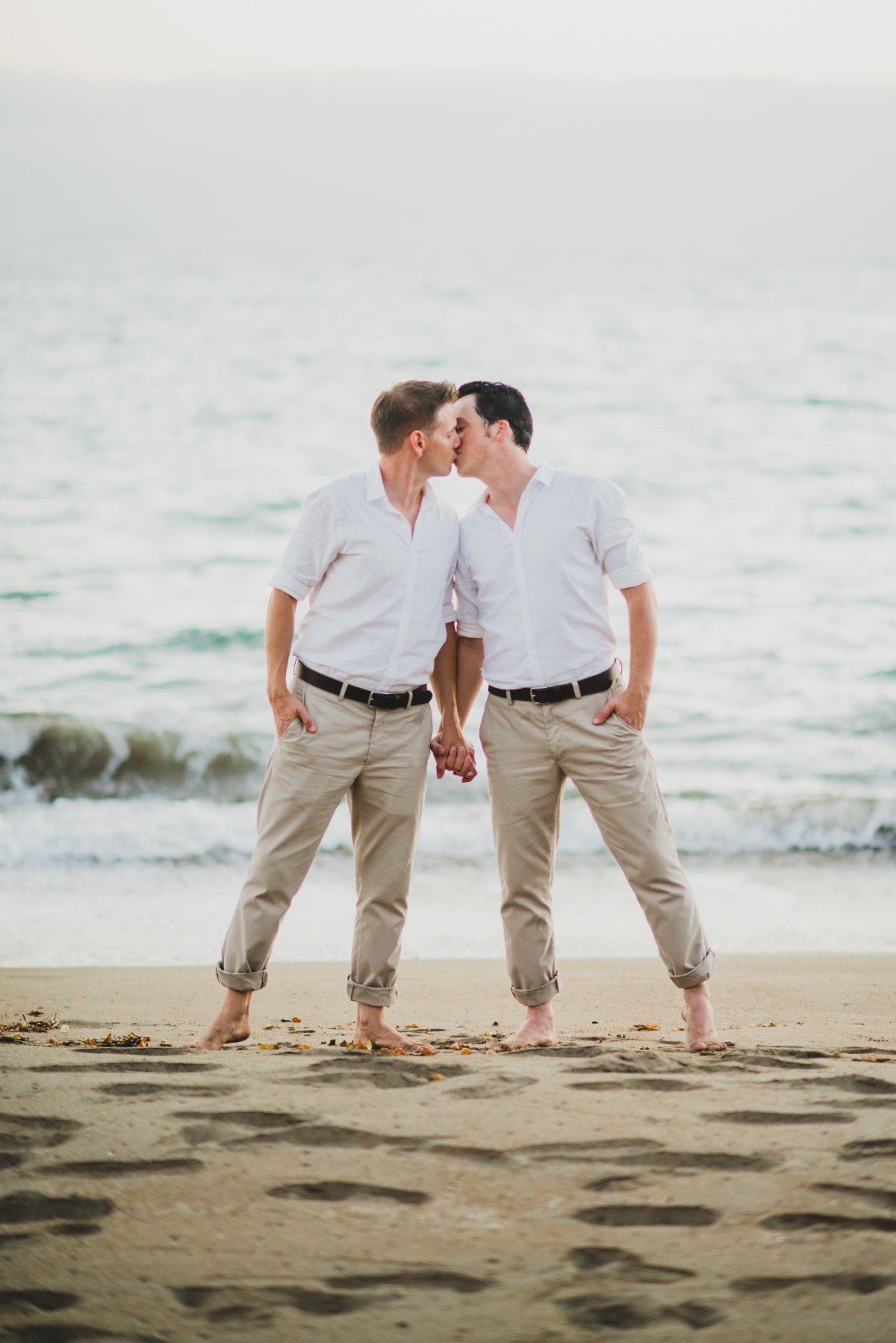 Obviously marriage wasn’t legal in the US until last year’s ruling. Did you ever think getting married would be a reality for you?

Nick Maricich: It was something the both of us thought about but didn’t necessarily see as an option at the time. Not only because it was not legal, but also that it was not something either of us were used to. It was not the ‘norm’, per se, for us growing up.

Nicholas, you’re from Iowa, Nick, you’re from California. What was your gay experience like growing up? Was it tough?

Nicholas Downs: Neither of us were out as kids. We actually didn’t come out until after high school. I think we were each about the same age when we did, maybe Nick was a little younger when he did. Looking back it was probably mostly due to the fact of being concerned as to how it would be received. There’s a lot of pressure on someone who is coming out sometimes as to how others will react, and that can be a tough transition and challenge.

Nick Maricich: For the most part though I think Nicholas and I have been pretty lucky with having supportive people around us. It can be a process, with some people just taking a little longer than others.

Did you lose any friends or family by coming out?

Nick Maricich: No, not really in my experience. All of my immediate family lives close to us and we’ve had a good support system from them over the years.

Nicholas Downs: Mine was more mixed. I didn’t loose any friends but various family members had different reactions. Even currently, it’s pretty mixed. But as I get older and I have nieces and nephews come out, I’m noticing their experience with their parents (my siblings) is a better one. I’ve had siblings tell me it’s because of me being out and living my life fully and free that has allowed them to have a greater understanding and a true sense of what unconditional love is.

Sadly, homophobia is still very prevalent in a world that we think has moved on so much.

Nick Maricich: Neither of us has experienced extreme homophobia, which is good, because we know some people have. But we’ve experienced being called names. Obviously those are people who are coming from a base of fear and perhaps dealing with their own identity issues so we try not to take it too personally, but it still stings as we know it’s coming from a place of cruelty. And we know it could happen to someone else who could become very affected by that kind of experience. Words can harm when used to demean.

The journey toward marriage in America was a long one. Had you going the fight?

Nicholas Downs: We were engaged just before the Prop 8 vote here in California. Neither of us actually thought it would pass; it was close, but unfortunately it didn’t happen at that point. We could have had a ceremony anyway, but for the both of us it was important for the legality of it to catch up. As I’m sure most people know, the legal battles here in California were long, but eventually the correct side won out. And marriage became legal for all. Looking back, when we got married was the perfect time for us.

How did you get involved to help bring about a change?

Nick Maricich: We went to rallies, volunteered for phone banks and, more importantly we feel, just lived our lives. So much can be done by just living and being free with who you are.

Nicholas Downs: Showing and sharing with others that who you are and what you mean to each other is just like any other relationship. Teaching by example and being us.

So now you’re married. Is marital bliss all it’s cracked up to be?

Nicholas Downs: We think so. As we said, we have been together for a while now but it was for us the final step to bring it all together. We can now call each other husband and that just feels so right.

What roles do you play at home?

Nick Maricich: We are very good at sharing the domestic duties; for us, that’s what works best.

Nicholas Downs: We balance things out. I like to cook…

Nick Maricich: And I like to bake and grill, I just hate laundry…

Nicholas, every gay man loves the movie  Is It Just You? What are up now?

Nicholas Downs: I have been auditioning and also putting myself out there for theater work. I love the stage and am hoping to get into a good show here soon. I worked on a film that James Franco produced called, Actors Anonymous” and I also shot an episode of the hit web series Coffee House Chronicles. My episode is called Jail Bait and is scheduled to be released in January. I also continue to produce Steam Room Stories with JC Calciano and we recently just shot several new episodes. I’m also putting the finishing touches on a romantic comedy script that I wrote. The goal would be to produce the film and also act in one of the lead roles (fingers crossed). I love playing all kinds of roles, comedic to dramatic. But for me an ideal role is working on a film with a director like Jim Sheridan. He has such a magic, yet real, touch to anything he writes and/or directs.

Do you get sick of people going on about you amazing Is It Just Me?

Nicholas Downs: Not at all. I love hearing from people who have seen the film. I get messages weekly and I do my best to respond to all of them. They were affected by the film in a positive way, took the time to reach out to me, it’s the least I can do. New people discover the film all the time and for them it’s a new experience. I enjoy hearing how this little film has and continues to have such an impact.

The supercute movie Is It Just Me? is available on Netflix.