‘Believe in your dreams and make them happen!’ 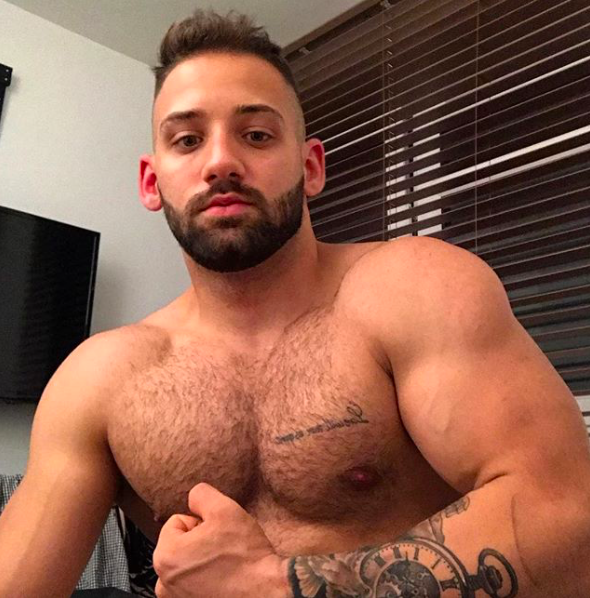 Mr Poland Marek Piekarczyk opens up about body insecurities, the heartbreak of men taking advantage of him and how he knows his late father would be proud of him being gay….

He maybe a star of saucy Netflix documentary Dream Boat and the reigning Mr Poland, but there is more to handsome Marek Piekarczyk, 27, than meets the eye. Yes, he’s handsome, yes, he’s deliciously buff and yes, he appears to shamelessly flash his physique across social media.

But Marek isn’t a fella who walks around with his nose stuck in the air. Behind his seemingly confident exterior, the Polish born flight attendant tells GuysLikeU that when he was growing up he was riddled with body insecurities and found himself being taken advantage of by men who cared only about his aestethics.

Here, in this refreshingly frank and tender interview, the quietly spoken hunk opens up about the dark times in his life, life in lockdown and why he would never consider launching an Only Fans

Marek, when did you realise you were gay?

Were you worried about your family’s reaction?

In spite of what we hear in media, many Polish people and families are really open minded about sexuality, so when I came out, I never had a problem with my family really. I came out to my mom and family on Skype. I’d been living in the UK for three years by this point and felt very confident and comfortable about my sexuality. They were very supportive and my mom told me that she loved me the way I am. I was lucky. I just wish everyone had a family like I have and be surrounded by people who love them for who they are. Sadly I didn’t have chance to tell my dad about my sexuality because he was killed in an accident before I could tell him. But I’m sure he looks down at me from the sky and he is proud of his son. He always said to me that he wanted to be with me on my wedding day. And he will be, but in my heart.

How did you start meeting guys?

I started meeting lots of guys online and it was fun. Most of them were muscled, bigger guys and I had some good and bad experiences along the way. A lot of the guys I met I found to be very narcissistic and not very real at all. Over time I started to be more selective about the men I met and got to meet some really nice guys.

Gay life has changed considerably over the years. Can you believe how hard gay men used to have it?

Yes, the LGBT community have been through some tough times and I am so thankful to all those men and women who have fought for our rights in past. Sadly, I don’t think young people appreciate what has changed over the years and I don’t really think that they understand what prides are really about.

There were times when I was bullied but I would fight back. I never once walked away because I am strong but I would sometimes end up in trouble. As I got older, I learned that it was important to walk away from negative people and if someone tries to bully you, you just have to show that you are stronger than them and walk away. And I’m happy I did so.

When you were properly out did you throw yourself into the scene?

I came out when I was 18 and from that moment on everything went super fast. I think the LGBT scene has a lot to offer people, not just wild parties and prides. There are sporting events too, which, as a former professional volleyball player, I take part regularly in. I play for an LGBT volleyball team in London. We have 450 members and seven teams. I play in advance team in division one and I promote sport in gay community.

Was the gay scene a world that you enjoyed or did you ever feel like you didn’t belong?

There were times when I would walk into a room full of people and wonder if any of them actually liked me. I was paranoid. These days, though, I can walk into the same room and wonder if I like them. Over time I have come to realise that I should walk away from people and situations who do not bring anything positive into my life

The scene can be a very sexual one. Is love what you are looking for?

Yes I am looking for love, but I still haven’t find The One.  Many times, men have taken advantage of me, so now when someone is trying get close to me I run away so nobody can hurt me again.

Back in Poland, my friends have regularly been victim of homophobia. Many Polish cities and towns have been declared LGBT-free zones. It’s fast becoming a situation like the one in Russia where gay guys are being attacked. Sadly the current Polish right wing government has declared war on LGBT ideology. Many friends get beaten up, there is vile hate speech on the internet and even on the streets. As Mr Gay Poland, it’s important for me that LGBT rights in Poland are respected like in other parts in Europe. Sadly, human rights rules have been stretched and broken many times. But I will keep fighting and campaigning globally to support my Polish friends who experience homophobic attacks.

A lot of young gay guys suffer from mental health issues. Did you ever experience any?

I did have some dark moments. In the gay community it seems there is a pressure to have good body and to look great. There was a time in my life where I had some problems after I lost a job and was dealing with some private issues and I ended up losing a lot of weight. I got very upset when kept saying I looked ill. But in the end I realised that I didn’t care what people said. Now I’m older I feel like I am on this earth to do something more then just exist.

A lot of guys use social media to boost their self esteem. You post a lot of pictures. Do you take it all seriously?

I do believe that it  is important is to have healthy relationship with social media and what is important. I’m lucky to have been surrounded by amazing friends who lift me up everyday. I have amazing, supportive people on social media who send me positive messages daily and I appreciate that.

You’re a good looking guy, have you ever been insecure about yourself?

Yes, I was for many years. When I first moved to the UK I didn’t speak the language so everything was so complicated. Sadly I didn’t get support from many gay guys. A lot of them were not kind when they saw me struggling with my broken English. There was also a time when I really felt like I wanted to look like some of the guys I’d see on Instagram. I liked the way they looked and thought I should look like them too. But then I realised that beauty really is what is found on the inside. From the moment I accepted myself both inside and outside I seemed to attract good people into my life.

Have you ever felt a pressure to look like other guys? Do you think gay guys are obsessed with the body beautiful?

There are so many guys who worry about the way their bodies look. But in the end, I have achieved what I have for myself and not to impress anyone else. I do it for my own happiness. I promote naturally myself and my life on social media is authentic and that’s what people like to see.

You appeared in the Netflix film, Dream Boat. Will we see you in anything else?

Yes, I really enjoyed making the documentary. I’m so proud of it. I done lots of extra work but, to be honest, I don’t plan on becoming an actor.

It has affected me financially, but I’m strong. And no, I don’t plan to start up an Only Fans. People keep suggesting I do. I think I’d rather struggle until this Covid19 has all gone and we are safe. I don’t have a problem with people who do it, but I’m happy to be heard in the community in different way. I think there are bigger things to do and achieve than appearing on Only Fans. But it is hard at the moment as I am on unpaid holiday. But I’m okay and I am surviving. I remind myself that I’m not the only one in this situation because of this disease – we’re in this together.

How are you dealing with isolation?

I try to stay strong. I live alone at the moment as some of my mates are back home in their countries. I fill my days exercising at home, studying for British citizenship, learning Spanish and cooking yummy food.

What have you learnt about yourself during this time?

I have learnt to be alone and be okay. I am trying to stay connected with family and friends on FaceTime and social media so I never feel alone. I hope when all this is behind us, we will all appreciate more people around us. I hope everyone is safe during quarantine. We need to come out of this alive. That’s our only job. Stay safe and be kind to yourself.

Finally, what would you say to your 12 year old self about the future?

Marek, you will be proud of yourself one day. Just keep believing in your dreams and make them happen.