Bisexual activist Lewis Oakley: ‘It’s wrong to mute biphobics just because we don’t like what they say!’ 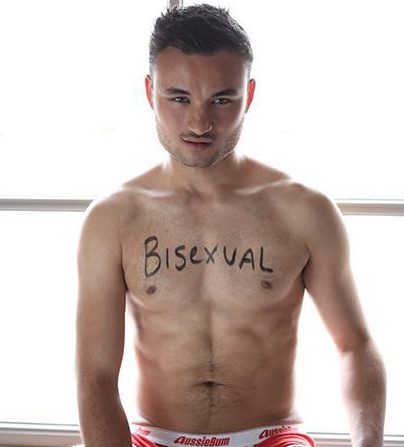 Angry bisexual activist Lewis Oakley hits back at the critics who challenged him about an article he’d written that asked the delicate question, ‘Would you date a bisexual man?’

This week, I wrote an article that asked ‘would you date a bisexual man?’ In it, two women offered two very different opinions – one saying she would be happy to day bi guy and one who said she wouldn’t. The piece has been condemned online by prominent LGBT campaigners and organisations as well as members of the public.

Hey @MetroUK – would u run a "would you date a black/disabled man?" article? #biphobic bile needs 2stop https://t.co/GPHW5WcnLT via @MetroUK

I have had many, many women tell me that they wouldn’t feel comfortable going out with a bisexual guy and I wanted to highlight that. It’s a taboo subject that needs addressing because for many women they don’t realise that when they say such things, they are actually being discriminatory. And if I’m honest, when researching the feature, it was far easier to find a woman to say she wouldn’t than she would when putting the article together.

I think the main issue here is, as with all things, equality is only as strong as your weakest link. Just because some hardened LGBT campaigners think that asking the question ‘would you date a bisexual’ is outrageous it doesn’t alter the fact there are people out there who would not consider it. Unfortunately the REALITY is that there are a lot of women out there who wouldn’t date a bisexual man because it makes them feel uncomfortable. Just because I am unhappy with the opinion doesn’t mean it doesn’t exist. That is why I had to highlight it.

I was also criticised for giving publicity to a ‘biphobic’ woman who said she wouldn’t date a bisexual guy.  But I believe this was vitally important to hear from people like this in a balanced piece like this.

As a campaigner for bisexuals I have to make tough judgment calls on the way I discuss issues. I decided early on there where two ways I could play this. Option A, only be positive, ignore all the problems and pretend that everything is great because I am bisexual. Option B – I could address the problems and highlight failings in people’s attitude towards bisexuals. I chose Option B.

I’ve previously written articles where I’ve highlighted misunderstandings about bisexual people and given sassy retorts that bisexuals can use the next time they hear them. In order to do such things I’ve had to acknowledge the biphobic comments out there.

.@MetroUK This article does absolutely nothing except reinforce people's prejudices. https://t.co/8G2nPhl3Zp

My target audience for everything I do is young bisexuals who aren’t confident enough in themselves or their sexuality. They are more likely to be bullied, told what their sexuality is and generally discriminated against. I feel it’s my duty to be honest with them, to not only tell them why being bisexual is awesome but also to highlight some of the problems they may run in to. Life is not easy and I believe it’s wrong and dangerous to mute biphobics just because we don’t like what they say!

Printing a biphobic opinion did two things. One; it allowed bisexuals to hear some of the arguments they may encounter so now if they hear it in real life it won’t catch them off guard. Two; it shone a spotlight on comments that bisexual people hear every single day. Comments that I’ve come to expect. Yes, people were offended by the comments – well welcome to my life. Frankly I don’t care if people were offended – now maybe next time they are out for drinks with the gals and hear someone say something like that, they will condem it.

I also found it rather irritating that so many people from the LGBT world come forward to condemn the publication for allowing these comments to go out. We should be applauding them for running such a feature? Did the article get even one mention of the fact that it was the first time a man has had the word ‘bisexual’ tattooed across their chest published on a large news website? No!

This article does nothing to tackle bi stereotypes, how about profiling stories from the bi community @MetroUK? https://t.co/zNY8X5brd8

It makes no sense to me to be mad at a website which has highlighted an issue. Be mad at the people who have that opinion on bisexuals. Or better yet, start a dialogue with those people.

The only thing I can say to all these LGBT campaigners that have tweeted disgust is that I think you’re lazy! Your approach of ‘let’s just ignore the haters and boycott the things we don’t like’ has achieved nothing. You have to start a dialogue with them to change things.

Another thing that really made my eyes roll were those who said, ‘would you publish an article asking would you date a disabled/black person?’ This type of uneducated nonsense is unacceptable, especially from so called equality campaigners. If they don’t realise that the issues of, disabled, black, gay and bi people are completely different situations that need tailored approaches I question why they have their jobs.

One thing that was apparent from the trolling I received on Twitter was that not many bisexuals were offended by the piece. Yet LGBT groups, as well as gay and straight campaigners, lost the plot.

The opinion from prominent LGBT voices was that I shouldn’t be talking about it. A bisexual being erased and told not to question things by gay people is nothing new. One sad truth that I learned early on in life is that there is a significant amount of biphobia that actually comes from gay men. Just because I wouldn’t ignore the issue, they disapproved.

In truth I think a lot of bisexuals would have been happy to see a national newspaper actually discussing a topic that for so long has been ignored by mainstream media. And that’s what LGBT organisations fail to understand.

Ask yourself, when was the last time an LGBT organisation did a campaign promoting women with bisexual boyfriends? – or the first for that matter? The truth is bisexuals are often last on the list of priorities for LGBT groups and that’s why I’ve always believed bisexuals should go solo and campaign for their equality on their own.

Was I happy with the piece?

Unfortunately my conclusion where I celebrate dating bisexual men was cut when it went to print. It’s disappointing but ultimately out of my control. However, I do still feel that it was better to have highlighted the issue than not to have discussed it at all.

The thing you have to remember is that national newspapers don’t need to discuss bisexuality everyday. What I do is PR for bisexuals and I have to make content that all of the newspapers readers will click on. In my short time campaigning I’ve got bisexual issues on to national news sites numerous times – far more than any LGBT group has done in the same period. I know what I’m doing and I’m the best person for the job.

The truth is I don’t care what LGBT groups have to say, I don’t care what Twitter has to say and I certainly don’t care about what gay and straight people have to say. My loyalty and the entire reason I dedicate so much of my free time is to help younger bisexuals so they can grow up to be happy young people who do not feel ashamed about who they fall in love with. The young bisexual guys and girls who aren’t confident in themselves or their sexuality yet and who are discriminated against by straight and gay people. The very people who often feel let down by LGBT groups.

I’m big enough and bad enough to take the heat. I’m a confident person who celebrates his bisexuality and I want to not only lead by setting a positive example but by tackling the issues they face head on and I won’t shy away from uncomfortable topics.

So, what do you think? Should I have asked the question?