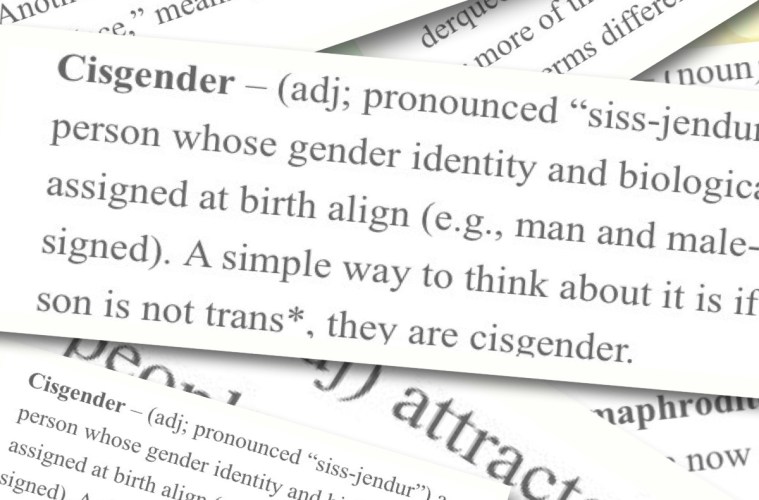 Do you know your ‘spectrasexual’ from your ‘genderqueer’? Of course not. There are just too many definitions of sexual orientation, gender identities and romantic orientations for us to get our heads round? Over 50, in fact! Do you care? Probably not. Writer Nick Smith explains why he has a wee problem with the whole classification hoo-ha and why it’s probably not doing anyone any favours!

I was chatting with my Mam at Christmas about what is happening in our world with transgender people right now and she barked at me almost ‘Loose Women’ verbatim: ‘I think it’s just fashionable and a phase!’.

Now don’t judge my Mam too harshly, as she is a formidable woman and brought me up to be the open-minded and tolerant chap that I am. But I did beat down her flippant comment with a retort: ‘Remember when you said that to me when I was 15 about me perhaps being gay, and how that really upset me and undermined me?’

She looked at me in silence, and I knew my point had permeated some of her generational brainwashing. I told her that perhaps with prominent transgender people now in the public eye and in brilliant and award-winning shows like Transparent and Orange Is The New Black that it may have helped others accept themselves and be able to take significant, brave and life-affirming steps.

I really do admire and applaud people that have done this, but I am at odds with the gender categorising we are now subject to and I believe we may be in danger of ‘out-niche-ing’ ourselves as a ‘community’. Although, I do like the odd Hugo Boss piece, as their trousers are rather roomy for my large calves, I have never been one for labels. They only serve to pigeonhole.

I certainly do not view others solely on those grounds, no matter how they identify. This is not to say that I am conceited and that I am not an advocate for equality and diversity; I just like to think there is much more on the table.

Some of the militia in our community believe sexuality is finite. I have heard some ridiculous and downright misogynistic labels being bandied around like ‘platinum gay’ (a gay man who has never even kissed a girl and was born by Caesarean section, thereby never having had any contact with a vagina); how surprising that some gay men would tie in their sexuality ‘status’ to some sort of tiered air miles reward programme. Eye-roll emoji. This appears to be now filtering down into the sheer amount of tiered gender categories we hear about now.

When researching this article, I found that there are over 50 definitions of sexual orientation, gender identities and romantic orientations. The most striking thing about this list is that it’s almost impossible to expect someone to know all of these terms, and understand completely their nuanced distinctions.

A friend made a brilliant point saying that most people wouldn’t know the distinction between Lithuania and Latvia, even though there are clear and simple differences that you could work out – but there are more gender categories than former Soviet republics! Let’s go through some of these in more detail.

I must get one thing off my chest. Cisgender and any cis- prefixed words. This refers to people whose birth-sex matches the gender of the mind, or the opposite of transgender. These terms to me are derogatory, superfluous and self-indulgent bullshit that only serve to grant unwise, bigoted cows like Germaine Greer a platform to undermine those who identify as a woman or a man that were not born that way.

Next: ‘Biromantic’. I mean, is this someone who is romantically attracted to pens? Apparently this is someone romantically (emotionally) attracted to people of all sexes/genders. This, in case you wondered, is different to bisexual, as these people may not have physical/sexual feelings toward a person they have romantic feelings for. See also ‘Spectrasexual’, or sexual orientation to people who fall within a spectrum of genders and/or sexes, and which sounds like a brilliant title for a Goldfrapp album.

One of the more alarming trends is that the insidious word ‘masc’ is now also being used in a transgender sense, like ‘trans masc’ for instance. More choice in this domain is not leading to diversity and inclusion, but is creating more niche subsets in a community already riddled with dreadful segregated and judgmental cliques. However, this is just my opinion. If people feel these labels help them, then fair play. I just feel it’s political correctness pandering.

I spoke with my lovely Twitter pal @0hjamie about this. He identifies as male and uses trans/TG/trans man in medical and relationship contexts. I asked him about this glut of gender categories and he thinks that some people really need to find an identity and that over time it may become less relevant.

‘When people start to find where they fit in society, they may look for ways to explain who they are and how they feel and that information is very useful when looking for support. In terms of pigeonholing, I think sometimes it can cause divisions or stigmas, diluting the power of a common fight.

When faced with a multitude of choices, it can feel like being forced to identify in a specific way when people now think sexuality and (to a lesser degree) gender are fluid or on a spectrum. In some ways, the lines are getting too blurred. Either it’s being reported more or it’s happening more, but the ideas of masculine/feminine behaviours are changing and all of these terms seem to reflect the conflicts.’

I have friends who are transvestites, and who am I or who is anyone to judge them for deriving pleasure from simply feeling feminine? Women are formidable beings and I can relate to the sense of empowerment and pleasure one can derive from feeling feminine.

I remember growing up and loving playing with Sindy dolls as well as Star Wars figures and Action Men (not just to pull their combats down and gasp at the non-existent peen!). I believe there is no label for that. I was just an inquisitive boy who liked plaiting my best friend Caroline’s hair in assembly at primary school.

By the way, I’m Nick. I’m 40 years old. I am a film buff and love tennis, Grey Goose, Sophie Kinsella and have a huge crush on Patrick Wilson that nobody knows about. Oh.