KX Steelers’ Drew: ‘There’s no judgement made about your sexuality; it’s all about your ability as an athlete’ 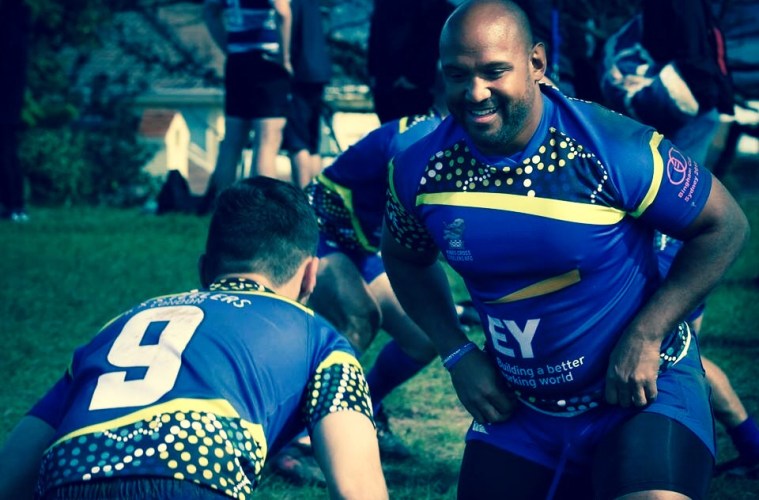 During the week, handsome 33 year old Drew McDowell is an Operational Risk Manager for an asset management company living in East London. But at weekends, the beefy American-born hunk whips off his suit and slips into a rugby kit to join his Kings Cross Steelers team mates on the pitch. Here, Drew shares some  of his rugby tales and reveals what life was like growing as a young gay guy.

Have you always enjoyed sport?

I’ve been an athlete playing various sports since I was a kid. My main sport was always soccer (as we say in the US), but also played basketball, athletics, volleyball and rugby. I’ve been playing rugby for over 14 years since I was in University.

There seems to be a great family feeling in the KX Steelers community.

Because everyone is going through the same gruelling training and it is a team sport there has to be a good bond between players. There’s a mutual understanding of the work that needs to go into becoming the best player you can be. We also have a common goal of winning. I don’t think anyone goes into a game wanting to lose. It’s a support network and you have to feel like you can trust the man that you play alongside.

And with all those guys together, there must be a lot of saucy shenanigans.

I would tell a new recruit coming into the club that loving the sport is the priority. We all take the game seriously and look for people to enjoy the sport as much as we do. That said, I met my first boyfriend through the club and we were together nearly five years and there are other couples within the club.

You did an amazing shoot for Meat recently – how was stripping off?

It was a very different experience for me as for previous photoshoots I’ve been in drag as part of the KX Steelers promotion for our annual fundraisers. I have to admit I was more conscious about my body for the Meat photoshoot given I wasn’t dressed up as a character and able to hide any flaws and pretend I was someone else. I was also a little more body conscious given the people that I was grouped with all have great bodies.

But you look amazing.

I only felt comfortable being in my underwear because one of my better features are my big thighs. For some reason people seem to be envious of them. I won’t lie I’ve got pretty strong legs. But I didn’t want to take off my top as I don’t have a 6-pack and just not entirely comfortable with my weight. I gained a fair bit post-hip surgery.

Why do you think it’s still so hard for gay guys to come out in sport?

I think it’s because any sport is considered to be quite a macho and ultra-masculine sport. I think there’s still this outdated perception that gay men don’t embody what it means to be masculine. Even though masculinity could mean many things and should no longer be associated with possibly the old age view of what it is to be a man. Also I think heterosexual men who have no experience or exposure to gay men feel threatened for whatever reason and lash out with homophobic comments. It would make anyone that is still ‘in the closet’ reassess whether or not they want to come out.

But there have been a lot more sports stars stepping out recently. That must be refreshing.

For a good part of my life there were very few if any gay athletes out there. It’s only recently that there have been gay role models in sport such as Gareth Thomas (rugby), Michael Sam (American football), Tom Daley (diving), Robbie Rogers (soccer), Nigel Owens (gay rugby referee) and even Ben Cohen (rugby) as a straight-ally / advocate of the LGBT community. These guys have taken the step to come out publicly and are good athletes and don’t brand themselves necessarily as gay athletes but merely athletes who happen to be gay. It allows for them to be role models for those younger athletes that are struggling with their sexuality.

Is it important to have gay sports teams?

I think until all sports adopt a non-bullying provision within their charters and promote inclusiveness, as well as a change of mindset within sport, I think we still need gay sports teams. The reason many of the guys join our rugby club is that there’s a sense of safety and security playing with people who share the same interests and similar backgrounds within the LGBT community. There’s no judgement made about your sexuality, it’s all about your ability as an athlete.

COMING SOON: Drew shares his coming out story, life in the military and the time he was forced to stand up to a group of homophobes.

The KX Steelers are celebrating their anniversary with a fundraising Ho’ Down at Heaven on May 6, 2016. Get your tickets HERE

The team also appear in the current issue of Meat, which can be ordered from meatzine.com. The zine will also be available from Kings Cross Steelers events.