Kings Cross Steelers player Drew: ‘I finally came out after losing my virginity to a girl on my dance team’ 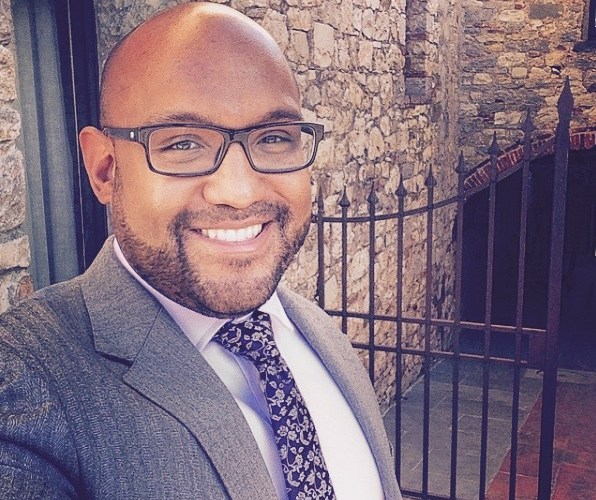 A couple of weeks back we met 33-year old Andrew McDowell, who told us about why he loves playing for inclusive rugby team, the King’s Cross Steelers. Now, as he and his teammates take on teams from around the world at the Bingham Cup in Nashville, he opens up about how he came out.

First up, you’re in Nashville for the Bingham cup – how exciting is that?

This will be my fifth Bingham I’ve competed in and my third with the Kings Cross Steelers’ first team. I’m really looking forward to it as we have a pretty strong side and we most definitely have our sights on playing in that final match.

Well good luck! We’re rooting for you. Now, take us back to when you first realised you were gay.

Did kids at school pick up on your gayness?

Actually, I was bullied quite a bit when I was younger because many of my classmates thought I was gay. However, over time, because I grew a bit stockier and was a pretty good athlete people didn’t bully me as much.

I tried keep it to myself for a long time as I didn’t know what it meant really to have feelings for another man. I only understood and knew what the world told me and what I thought were the social norms. I did come out to my family as being bisexual which I think many men did.

What was your first gay experience

Ha! Well, that’s quite personal, but but it happened when I was a teenager with a friend. Let’s leave it at that for now!

I did have girlfriends growing up and used to sneak out of my house to go see them. But my last girlfriend was probably when I was 16 or 17 years old.

Was being gay something you were worried about? Did you go through a period of not wanting to be gay?

I most definitely had issues of not wanting to come out or accept it within myself. Ever since I could remember, I always dreamt of getting married and have three – four kids with the white picket fence. I thought if I was gay, none of that could be possible. I still think it’s difficult to be a gay man and have kids, but still very much want them.

I honestly didn’t have any gay role models that I can remember. There weren’t any really during my time of growing up that I associated with. My dad was ultimately my role model because I loved being an athlete and he was a great sportsman.

So when did you finally admit being gay to yourself?

It was only after I got back from my five months military training in Georgia with the Army National Guard and after losing my virginity to a girl on my dance team as final confirmation, I officially came out after . I was about 20 then during my University years.

My mom, because I thought I would have disappointed her and failed her in some way. Also I was worried about my dad because I was his only son and the possibility of not being able to be the man he envisioned me to be. Thankfully, both of my parents were accepting. My mother was more fearful for what people would do to me and also a bit afraid because she didn’t understand it.

Good question. I’m pretty sure it was my best girl friend in college, Laura. We were kind of inseparable during our four years to the point people thought we were dating but I was just her gay boyfriend in reality.

I told all my close friends one-on-one in private to minimize the fallout of any bad reaction. Thankfully all my friends had good reactions or already knew. They were all very supportive so I count myself very lucky and it made me appreciate the friendships I had even more. Coming out to my straight rugby team at uni was another thing. But again they were all really supportive. If anything they were grateful that they could fill a majority of their quotas (which didn’t actually exist). I represented the blacks, Hispanics and then the gays. Triple threat (as my sister says). Ha!

Once you were out, did you throw yourself into the scene. was it as you expected.

Since I didn’t have any gay friends while I lived in the States, I didn’t really throw myself in the scene. I did become a bit more ‘camp’ for lack of a better word. It was a learning curve to say the least.It wasn’t until I moved to London that I really immersed myself into the scene and had to learn a lot in a short period of time. The London gay scene was completely something that I had never experienced before. Thankfully I didn’t have any expectations really because all I knew about the gay scene was what I learned off of Queer as Folk (American version) and the small scene in Providence, Rhode Island.

Do you still like the gay scene or are you bored of it?

I like it but I think I’ve had my fill of it and experienced a lot of things that I feel satisfied with not having to go out every weekend to XXL or Soho like I used to. The scene doesn’t change all that much so the ‘fear of missing out’ feeling has dissipated a fair bit. I now enjoy being social with close friends at someone’s flat, out to the movies or just a generic pub.

I think many of us have had some bad experience at some point of time. When I was in the military I was question about my sexuality which could have resulted in discharge, which wasn’t a great experience. I was harassed by a group of guys in Clapham.

Oh my God, what happened?

I was leaving the Two Brewers one summer evening wearing a hot pink shirt and shorts and these three guys spotted me and stated harassing me about being gay. I think they were looking to see what reaction they could get out of me and whether I’d do something physical. Although it was 3am and I I still had my senses about me to make the smart decision and not do anything physical. A three-on-one confrontation is never a smart choice, even though I’m quite strong and a big guy. I mainly took the black guys to task shaming them for being prejudiced and acting the same way that white people had treated black people in the 70s. It wasn’t necessary. Thankfully my uber arrived and even the driver spoke up as the guys were spewing hateful things as we were driving off. I was slightly afraid as I wasn’t sure how it could have escalated.

Exactly, you just never know what people might do…

I knew that it was a very public place as people were filing out of bars/clubs at that time, so knew it would have been pretty dumb to do anything physical but I still had a bit of that fear.  What saddened me most, was that it was people of my own race who have been persecuted in years gone by who were intent on inflicting the same pain and hateful attitude towards another minority. I might be making it out a bit bigger than it actually is but I just think that anyone knowing how it is to be hated on wouldn’t want to do the same to others. Naïve, I know. At any rate, my experience is nowhere near what other people in the gay community have experienced. It was merely an unfortunate situation.

Do you find the scene is very superficial these days?

Yes and no. I think we’ve built it up in our own heads to a certain degree i.e. bears will only date bears, muscle Mary’s will only date muscle, etc. But there is a bit of truth otherwise it wouldn’t have just come out of nowhere. At times it can feel like the cafeteria scene out of Mean Girls. Welcome to the Wild.  I think it is superficial if you surround yourself around people who are superficial and that’s all they care about. Thankfully I have some really grounded, crazy, but grounded friends who just enjoy each other’s company.

Is the gay scene a bit redundant now that straight bars are so accepting?

I don’t think it’s redundant, just like you have ‘urban’ or black bars/clubs. People will gravitate to places they feel comfortable and it’s a place where other people share a commonality, whether it be the music, the people, the kind of alcohol served, whatever. I think there are gay guys at straight bars and many straight people at gay bars, granted it tends to be more females going to gay bars, but you find the odd straight guy comfortable enough to hang out with his gay mate.

When it comes to finding the one, are you too fussy?

To be honest I think everyone is fussy to a degree. You know what you want, I think it’s more that you don’t close yourself off to something unexpected. I have in my head my ideal, but I find that if I meet someone and we have a connection and can relate to each other and laugh, then I become more interested in that person than what my ideal was.

Yes, I have and if people say they haven’t then they weren’t ever really in love.

All the time. There have been a couple of guys the past year who I got on with, went out with them, we find that we actually really enjoy each other’s company and share similar interests to then discover he only wants to be friends.

How do you or did you meet guys?

Both of my serious boyfriends I met while I was out. One was through the rugby club, when I first moved to London and the other was at an Out for Sport event. I would love to pick the brain of those people that met their long-term monogamous boyfriend through an app and understand how they did. What did they say in text that captured that person’s heart. Would be an interesting study…

We keep hearing of a rise in the diagnosis rates of HIV. Have you always been wary about safe sex?

Yes, I try to be cautious as much as possible. However, I’m not hung up about dating someone who is positive. If someone is undetectable, healthy and takes care of themselves then it’s a non-issue for me.