‘I’ve had death threats because I was a gay Romany gypsy!’ 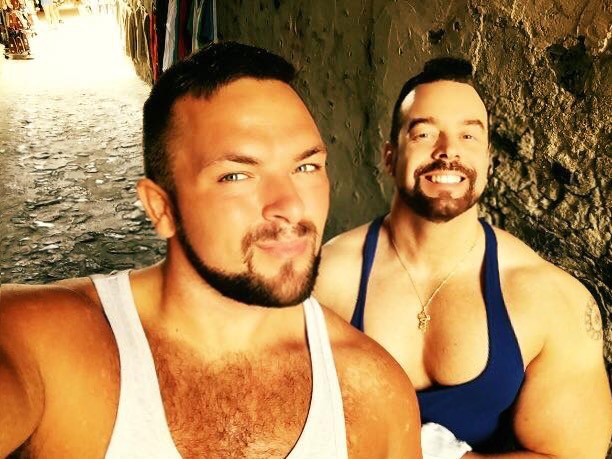 We live in very enlightened times, but we all know that coming to terms with our sexuality can still be pretty tough. Even now! But imagine you lived in a community of people where being gay just wasn’t accepted. Meet gorgeous John O’Neill. He spent his early years living in a community of Romany gypsies. Here, he shares with us his difficult coming out journey and fear of being killed for his sexuality.

John, tell what growing up as a Romany gypsy means?

There’s a sense of freedom that comes with the lifestyle. Freedom to explore the world, to travel and see things most people wouldn’t.

Did you enjoy the lifestyle? What were the pluses and negatives?

I did enjoy it, the community side of it. As a child I would venture out a lot, like most children, I’d go fishing and play in fields, so a really exciting time. But the negative aspects came as I grew up, and my eyes became widened to the world I thought I knew, as I developed sexually. You see, like any other close community, individuality is often frowned upon.

When did you start coming to terms with the fat you were gay?

Well, when I was about six years old I had a little boyfriend. We weren’t in love or anything, we would just play doctors and what have you. We used to meet in secret in the fields and kiss. I remember my mother finding me and my little boyfriend kissing and she smacked me and told me to go inside. not that she was homophobic or anything, I think it was just the shock to begin with. Other than the boyfriend aspect of my life, I also used to dress in my sister’s dresses, and sing Part of your World from The Little Mermaid. I don’t do that anymore! I think that was just a phase I was going through as I grew up with four sisters and trying to find my own identity.

How did you deal with these burgeoning feelings to start with?

As a young adult I was very afraid, of anyone catching me do anything perceived as gay!  I was petrified of what the outcome would be. I always heard the stories of men being caught having sex with other men and beaten, and in some cases killed.

So being gay frowned upon in the community?

Some gypsies are still very old fashioned and they carry this law around with them, that a man has to be a man, bread winner, husband, father and straight. Also religion is a very strong aspect in the gypsy community these days sadly. And this gives rise to judgement against anyone in LGBT community, seeing it as a sin against god.

Were you able to share your feelings with anyone?

In the beginning I had no one to speak to about it, I felt very isolated. I can remember the first person I came out to was my sister, I told her on New Year’s Eve, and we cried. It felt like I had taken a massive boulder off my shoulders just to be open to her. It’s funny, though. A few years later she came out to me as a lesbian, so it must runs in the family, eh? Ha!

So what did you do? Did you keep it a secret? Did anyone suspect?

When did you first kiss/shag a guy?

I experimented as a young child, but as an adult my first shag was with my very first serious boyfriend, I was 18, he was 20-odd, and a gypsy.

Was it everything you thought it would be?

Yes, and no! I enjoyed the taking aspect of it, but I didn’t think or realise that when I topped and pulled out it would be so messy. I remember laughing to myself in the disabled toilet washing myself in the sink. After that I learned about douching!

Did you feel guilty about it? Did you think it was wrong?

Not for a second, I loved it. But it was still taboo which gave me a bit of a rush when doing it, in the back of that guy’s van!  Obviously as a gypsy we didn’t have a room or anywhere else safe to do it. Thinking about it now, why didn’t we get a hotel?

Who did you come out to first?

My sister, but when I first majorly came out, it again was on New Year’s Eve (start the new year with a bang, eh?), then two of my older sisters, my little brother, and my mother – dad came later.

What was the reaction?

My mother didn’t take it well at first! She cried for days, months. She said she always knew, I think most parents do to be honest. My sisters and brother said they knew too. But when my second to oldest sister found out, she said to me ‘you should still get married to a gypsy girl, and shag men on the side! Loads of gypsy men do it.’

I was in shock; how could someone say that? How could anyone want their little brother to live a lie like that?

And how did you dad take it?

You know what? He took it better than anyone else, and that’s amazing! Bearing in mind comes from the fighting side of the family I thought I was a dead man, but no, he was more protective than anything.

Aw, thats great! How was life after that? Did your community accept you?

You’re now loved up with boyfriend Jason. How did you get together?

We first started talking on social media, and what was refreshing after so many disasters was that sex wasn’t mentioned in any of our messages. I can remember the first time I started chatting to him, he gave me his number. I called him and we spoke until the sun came up. The next day we arranged a date. Me being brash, I asked him to kiss me, and Jason being Jason said ‘I don’t kiss anyone unless I’m going out with them’. My instant reply was ‘so will you go out with me’, to which he replied ‘yes’. We’ve literally been together ever since. Is it forever? I love him. I would love to think it’s forever.

Awww, nice. Do you have a good relationship with your family?

My lesbian sister and I are best friends. Me and  younger brother are also close too and one of my older sisters I adore could speak to her all day. I try to remain close to all my family, but it’s hard to keep track when they’re always moving around place to place.

What advice would you give to other guys in your situation?

Be careful, but at the same time try to be true to yourself, never let anyone tell you how you should live your life. If the gypsies you surround yourself with are homophobic, I advise you to move away and change your company otherwise you’ll grow to hate yourself. Be careful having sex, always stay protected, and don’t see being gay as negative, because it isn’t. Come out when you’re ready to, but don’t use anyone as a cover and don’t be forced to live a lie.