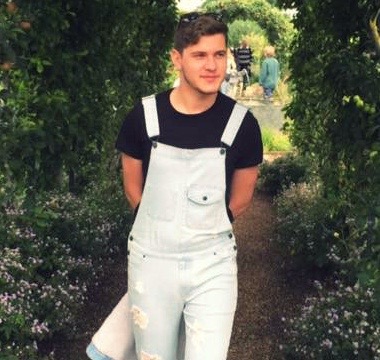 Rari Vlad is a Brighton-based blogger who here tells his story about having to leave his family in Eastern Europe to come to the UK to finally come out and find happiness – but at a heartbreaking cost!

As a child, I noticed the caution all the other boys took when they approached me on the playground. I was the odd one out: every little girl’s soul sister, the seamstress of their Barbie dolls, the kid most boys would rarely ask to play. A heavily orthodox, post-communist, what-would-our-neighbours-think kind of society leaves the odd boy with limited options on the playground. I was smart enough to acknowledge it at a young age; and even smarter – or so I thought – to pretend I was just like them. But how successful was I, you may wander?! I’d rather you not, really.

There weren’t, and still aren’t, any LGBT role models in the national media of any post-communist nation. Nothing on the TV, no success stories, no positive portrayal of queer folks. Friends and family would address homosexuality using a rather disgusted tone and you can imagine how much that helped.

High school was a time of constant secret guy crushes and one sided romantic infatuations. At the peak of my hormonal teen years, the questioning started: ‘Why don’t you have a girlfriend?, ‘Have you had sex yet?’, ‘Is there something wrong with you?’, ‘Do you need money to take someone special out for ice-cream?’ Well, I confess taking the money and eating two ice-creams, but that was the peak of my romantic affairs.

A certain etiquette and standard were expected of me: to be straight and orthodox. I kept failing at both, but finally time to go to university had come. Some of you went to the nearest city while others crossed the country, far from your parents. Me? I chose a three hour flight to the other end of Europe. I chose the progressive West, the open minded and less judgmental England.

Trying to find the strength to come out I would find my senses cover by a cloud of fear. I couldn’t just yet be my family’s disappointment, my relatives’ reason to look down at my parents, my colleagues’ friend that will get erased from the school book.

I first came out to myself in the broken mirror of my shaky wardrobe. An endless self-loathing night brought an even darker dawn, where I was, once again, one step away from suicide. The amount of time suicidal thoughts filled me with hate and disgust is unrecallable.

A flashing vision of a happy boy illuminated my mind. It was the younger me: never that popular, nor with awesome life prospects, but with a joyful lively charm and a unique flame burning bright.

I realised that the self-imposed censorship was murdering my spirit. I was consciously censoring myself from finding and reaching my purpose in life. It was clear, like a basic fraction, that I needed to murder the censor within; and so I did.

A Scorpio with their moon in Libra are analytical and indecisive human beings and I wish I could lie and say I’m different. The battle with myself took years, but the thought of losing myself for eternity made me say ‘I’m gay!’ with such an ease.

Sharing it with others wasn’t easy but I surrounded myself with love and encouragement. When I didn’t get it from some, I found it within, in the ashes of the murdered censor. My ‘Yes, I am gay.’ transformed into my parents howling ballad that still echoes from afar.

They cut me off and never really understood I want to marry another man. They found psychiatrics who recommended testosterone injections, brain exercises and so on but their intervention came too late. I never looked back, took another job, skipped some lectures, and still got my International Relations degree.

There was hardship. Plenty of it. There was solitude, but most importantly also freedom and quietness. The censor within is long dead. Its death put all the negative thoughts on mute and empowered me to keep on keeping on. Living authentically enhanced my life prospects.

Shutting down the haunting voices in my head enabled me to find the right path for myself. What started as a curse – being gay – turned into a blessing. And I’m not pulling the ‘OMG! I’m so proud to be gay!’ card, I’m only saying the obstacles I had to overcome because of it helped me grow into who I am today.

It made me stronger, grounded, and responsible. An overall cutie-pie, as I would call myself in my most narcissistic moments. Happy days, happy gays!

If you have experienced any suicidal thoughts contact The Samaritans