BODY CONFIDENCE: “I decided I wanted to change the way my body looked as I wasn’t happy with it” When Hywel Kennedy turned 30 this year, he became single and quit his job to start anew. Feeling more confident than ever, he looks back at the dark times in his life…

Turning 30 can be a tough time for some people, but for gays, well, it can be very challenging. When Hywel Kennedy reached the landmark age he found himself suddenly single and embarking on a new career. Here, the media professional opens up to GuysLikeU about moving on after a split, how he came to terms with being gay and living with an eating disorder that left him body conscious.
You recently turned 30, how are you feeling?
Up until about two months ago I was in a relationship. He ended things three days after turning 30, so that was a nice welcome to the decade! I’ve also recently quit my job in search of a new path so you could say 30 is a chance to start all over again! Or at least that’s how I’m choosing to see it.
Is finding that special someone important to you?
Yeah I guess so.. I thought I had it to be honest… but I think to have the right thing with someone, timing needs to be right for both of you and you have to be at peace with yourself!

You’re a good looking guy, Have you always found it easy to find guys?

Like many gays I struggled badly internally with my sexuality. When I first came out at 21, I found it difficult to let my guard down and know how to play it around guys. But yeah, it hasn’t been difficult on the whole. I’ve hade three long-term relationships (one with a girl!) and I guess I’ve always gone finding those relationships when I wanted them. Are you an easy boyfriend to be with?
Err… can we skip this question, please?…  I’m not sure what the answer is. I feel like i’m a dedicated boyfriend. I’m opinionated though and not really afraid to speak my mind on something so I guess that can be an issue!  (maybe I can fly off the handle a little bit too – but i’m working on that!)
What lessons have you learnt from previous break ups?
I’ve learnt that should never rush into anything. I’ve learnt to trust your gut a bit more when it comes to sensing things within the relationship. I’ve learnt that trust is very important, probably the most important thing in a gay relationship. It’s easy to get distracted by the next piece of meat in a nightclub. Temptation is always there on the scene, but if trust is there then it shouldn’t be an issue. I’ve also learnt that a relationship should be a nice add-on to a happy and healthy life, a relationship should not be the thing that happiness hinges off.
You’re been working out a lot and showing off the results on Instagram. Are you happy with the way you look ?

I started working out a year ago, I decided I wanted to change the way I looked as I wasn’t happy with it. I’d say I’m not happy with the way I look to be honest. I think I’ve always felt a bit worried about it. I think once you start ‘improving’ yourself aesthetically you’re always looking at the flaws and the next thing to change. If someone could give me a wad of cash I’d skip my ass down to Harley Street for sure. me, vain? no. 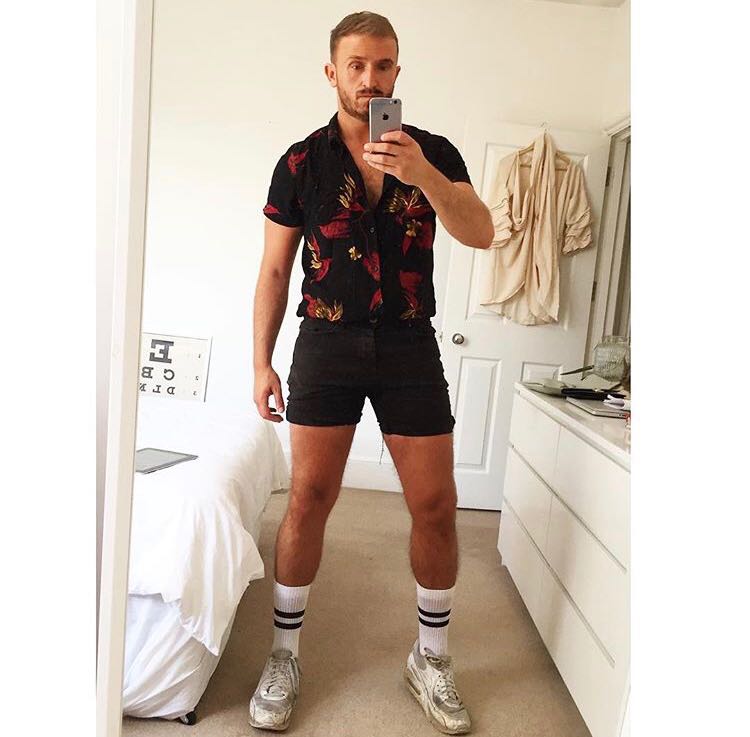 Do you think having a good body in the gay world is important?

Absolutely not. There is an archetypal drawing of a modern day gay man, to which many attempt to conform to… But define ‘important’ though… If you’re into the scene, XXL, circuit parties, regular sex, then I guess, yes, having a good body is ‘important’ in terms of that conforming and getting what you set out to do… but some of the most successful ‘out’ gay men in the world, in terms of influence, don’t have the typical ‘good body’… it certainly shouldn’t define you and doesn’t make you any less of a person if you don’t go to the gym.

But if a boy wasn’t toned would you ignore him

No.. I’m not shallow. If anything I get intimated by overly toned guys, because I guess I think that having a good body IS important to others so occasionally feel like I’m not ‘good’ enough. It’s ridiculous, I know. It’s all about a pretty face, sex appeal, sense of humour and a sense of drive! (is this my tinder profile?!) It very well could be! Have you always had body issues?
Yes, I’ve always had body issues. I went from being an in-shape 19 year old, ballooning to nearly 16 stone when I was 21. I was very miserable and very closeted. The day I came out I started to diet, and my weight loss went from a casual weekly weigh-in to an obsession. I used to have a target of how much weight I could lose that week and then vary my diet to make it happen, eating less (or somethings nothing in a day) at points I would lose around 6 pounds in a week! 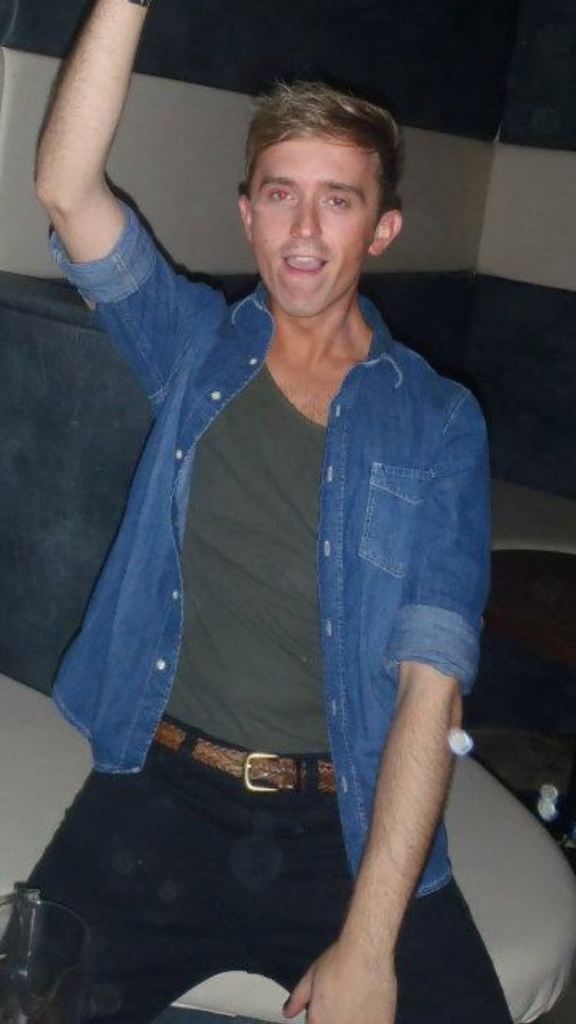 Wow, that’s shocking.
At the same time I was newly out, partying, so was experimenting more with clothes and couldn’t pass a mirror without standing in front of it and analysing myself. I didn’t even notice my weight loss I just knew that I needed to change something about me so now that my sexuality wasn’t in control of me anymore. I was controlling my weight instead. The comments started pouring in “you’re too thin” which in my brain genuinely translated as “you look great and slim”. It was only a year since I’d started dieting and almost 22 years old, at 6 foot, I was 9 and half stone. That is stupidly underweight but I didn’t realise. One night after my birthday party, I got so anxious about it all and combined with the hangover destroying my underweight body, I had a huge panic attack that led to an ambulance picking me up and going to hospital. Even though the hospital wasn’t directly to do with my weight it was a wake up call to me and those close to me. It’s taken me a while but I can honestly say that my diet is pretty much back to normal now, I don’t care what I put in my mouth – no jokes. I think the gym has allowed me to relax on that front as I know that I want to gain muscle and food is my friend. Eating disorders are serious stuff though and affects lots of people on a more permanent basis. Everyone has their individual relationship with food and I think it will always stay with you, it’s about managing it. You’ve recently started posting what some might called thirsty pics online – does this mean you are proud of your look?
I’m not that thirsty am I?? I am constantly conscious of how I look, but I have worked quite hard in a year on something that I genuinely used to hate (my body) so I’m unashamedly showing it off if I can. People do get a lot of shit for being ‘thirsty’. Instagram is all about image, health, fashion, bodies and people use it for different things in different ways. i’m just doing me, for what is me right now!
Does posting pics merely encourage vacuous relationships with men?
You raise a point. yes, I guess if relationships are formed on image then there’s an argument to say that the relationship formed will only ever be skin deep. that’s why I said before, yes looks are important, but I wouldn’t use Instagram topless pics as a basis for choosing my future husband. that’s ridiculous.although I’d be more than happy to test drive. You’re dad was a rugger bugger – was coming out hard?
Coming out – nobody has time to read THIS story. erm… do you know what, coming out to myself and accepting myself was and still is the hardest battle. I was one of those boys who completely repressed my sexuality, which manifested itself into self-hate, and hating being gay. That’s hard. My dad and mum have from day one always been supportive. My dad is a soft old fart really and has always been more than friendly to my ex boyfriends etc. A nine year old boy killed himself this week because he was bullied for being gay – what advice would you give a young gay guy going through a tough time.
This story absolutely broke my heart and is absolutely not OK. It’s hard to even know what to say, and I hate even thinking about it. I would advise anyone, regardless of age to be strong. “Everything will be ok in the end, if it’s not ok, then it’s not the end” is something I live by. what I would give to tell that 9 year old boy just how strong he is, and how deserved he is of a happy, high-achieving life, where there is a community waiting for him that accepts him. I think it’s important that governments/ states alongside media do everything they can to educate using their influence the people who are raising these kids and their peers  – so teachers, parents. these are the people shaping our future generations’ societal, political and ethical opinions.
What are you looking for in a man?
I’m still figuring it out but someone funny, driven, sociable. i’m a sucker for green eyes though.   I’m only just getting over a break-up and rediscovering who I am as a single man. I’m enjoying it actually. it’s nice to feel wanted again!

Would you sign up to a gay Love Island?

Absolutely not. A night out in Clapham High Street is enough interaction, let alone a confined house. Imagine the arguments! I just saw a video of two muscle queens fighting at Circuit party in Mykonos, I’d imagine Gay Love Island to be on that level of HELL.  There’s definitely a market for a new gay TV show though… I need to get working on my pitch, I think it could be amazing!