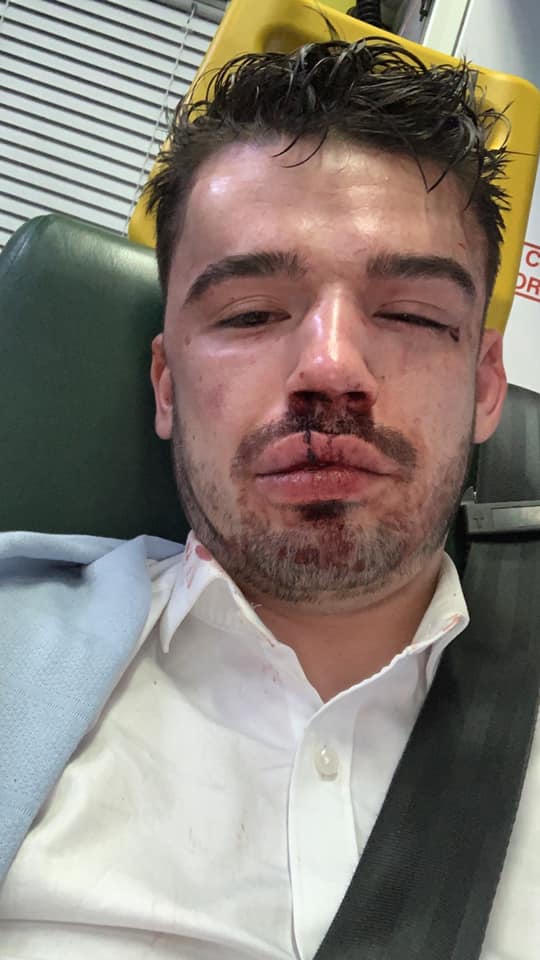 A young gay man has posted a picture of himself following a savage  attack to remind LGBT+ folks that they have to remain vigilant when they are on the street.

Handsome Brandon Field posted the distressing image on his social media this week, just days after he had been attacked by four vile thugs in central London.

The incident took place on the evening of Saturday 9 November in the Embankment area of London. Four men jumped on him, verbally abusing him, attacking and robbing him before running off leaving him lying in the pouring rain, covered in blood and bruises. The brutal attack left Brendan with a dislocated jaw and unable to see for a couple of days. However, the brave fella says he is ‘grateful’ that it ‘wasn’t a lot worse’.

Brendan also praised passers by who came to his aid who called the ambulance and the police to take care of him. ‘Those people truly saved me and I will be forever in their debt,’ he says. In his heartbreaking post, the brave young man explained why he decided to share his vicious and unprovoked beating in public: ‘I thought a lot about whether I should post this photo because anyone that knows me knows I am quite private in person, usually strong in character and happy in person – but not this week.

‘Hate crime is something that naively I didn’t ever think would be targeted towards me. I’ve been lucky enough to grow up surrounded by a beautiful accepting family and although I’ve had my fair share of slurs, society hasn’t thrown too much trouble my way. I’ve been lucky.’ Speaking to GuysLikeU.com, Brendan says that he is now on the mend and is healing but was keen to speak out to remind the LGBT community to be more cautious about their safety when they are out and about.

‘I didn’t think something like this would happen to me and it has so everyone should be on their guard,’ he tells us solemnly. ‘The message here to all those within our community is please be careful. I thought we lived in a much more accepting world and this week my mind has been changed. Be safe, be strong and most importantly, be together.’

Sadly Brendan’s attack is just one of too many taking place in the UK. According to a recent report, hate crimes have risen by 10 per cent in a year across England and Wales to a new record high. Of the 103,400 hate crimes recorded by police in 2018-19, the largest increase was seen in transgender hate crimes, which shot up by 37 per cent to 2,333 incidents. The second highest rise was for crimes motivated by sexual orientation, that were up a quarter to 14,500. Brendan says he had never previously been too concerned about falling victim to hate crime. ‘Generally I wouldn’t think twice about being myself in public,’ he says. ‘I’ve always been very head strong and bold in character which has led me to the person I am today. But this incident really has opened my eyes to be more wary when out and about.’

However, like many LGBT+ folk, Brendan has sadly endured other forms of abusive behaviour from bigots. ‘Of course, I have had verbal abuse in the past,’ he tells us. ‘It is something that I’ve grown up with unfortunately. When I was a child I was teased and me and my first boyfriend were spat at and told to “burn in hell” when we walked around Winter Wonderland. It’s always made my blood boil which is why I am passionate about living life as the best person I can be.’

Brendan says police are currently investigating the case and he hopes the four thugs are reprimanded. Defiantly, he raged: ‘To the four people who did this to me; karma is going to get your ass and I pray the police do their thing to find you.’

If you find yourself in a similar situation as Brendan, make sure you report it and contact Victim Support