Jeremy Joseph: ‘I have been living with an eating disorder all my life’ 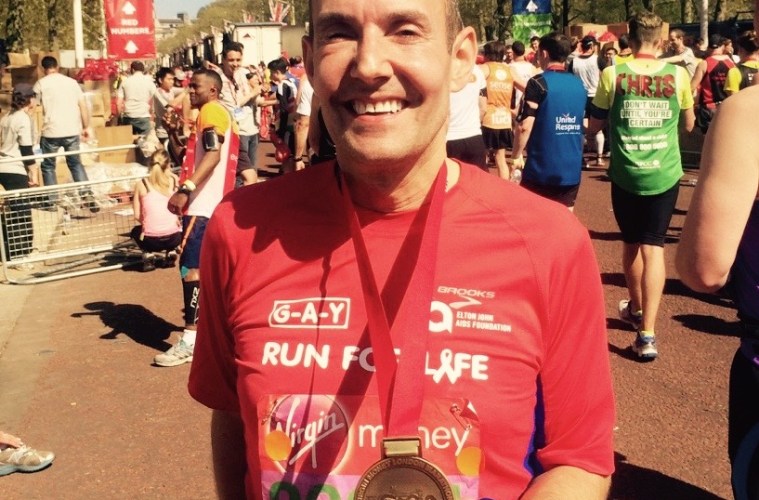 Jeremy Joseph opens up for the first time about the eating disorder he has been living with all his life and how he’s tried to deal with it.

This weekend, king of Soho Jeremy Joseph takes on his seventh London Marathon in aid of the Elton John AIDS Foundation. In that time the big hearted owner of the G-A-Y franchise has raised hundreds of thousands of pounds for good causes and hopes to raise tens of thousands more this Sunday, in spite of a excruciatingly painful shin splint injury that he sustained last year.

Ironically, he tells us, when we join him in the empty daylight filled upstairs bar of G-A-Y Bar on Old Compton Street, in spite of his injury, he has actually become something of a super sprinter as his marathon time last year was his fastest yet!

‘The first marathon I did, I did in 4 hrs 31,’ he explains. ‘Then the year after, I was slower at 4.36. Then the third year was 4.21, then 4.14. Then last year, when I had these shin splints which I got from over training, I did it in my shortest time! In sub four hours. (3hrs 59 secs). I have no idea how I did that as I was in so much pain. My ankles are still really sore and it constantly feels like they are going to give way. But I have done some half marathons and my times are getting better. And for this weekend’s  marathon I have had couple of cortisan injections to get me through it so fingers crossed. ‘

While Jeremy admits he enjoys the training aspect of the marathon – which sees him running up to 20 miles a day – he says that that his new pastime has had a much more serious effect on his life and one that he is keen to talk about for the first time so that others going through similar issues can learn from.

Here, in a short excerpt from our amazing upcoming full length interview with Jeremy, the club legend reveals how he has been living with an eating disorder all of his life and how marathon training has helped him deal with it in a more healthy way.

Jeremy, the training for your many marathons must make you feel so much fitter?
It does but if I’m honest, I actually started running because I have been living with an eating disorder for years. You see, I have a fear of food and putting on weight. So running means I can eat as long as I am running. For example, a Wednesday is my long run day, so in my head I can eat a proper meal and pig out on a Tuesday because I know I am on a run the next day. It’s all psychological. But that’s the real reason why I started running.

Did the eating disorder emerge early on in your life?

I have had it all my life. People don’t talk much about eating disorders in men very much. The focus is always on women, so I am happy to talk about it because there are so many boys going through similar issues who are unheard. For me I have always hated my body. I have always hated the way I look. Even now I think this! And to do something about it, I have done some stupid things over the years to lose weight. I tried diet pills from online that had really bad things in them.. I tried appetite suppressants that give you mood swings. I did the stupidest things I could to lose weight. But running has helped me a lot.

If I know I am going to do a run the next day I will eat, if I’m not then I won’t eat. People are going to read this and think I’m an idiot, but I weigh myself three times a day. That’s just the way I am. I know it’s not normal, but that’s the way I am. I have a weight I want to be at. I have worn the same belt for years and know that I want it to always be on the fourth hole. It’s stupid things like that that I want to maintain. And as you get older it gets harder as your metabolism changes. Running is a much healthier way of maintaining my weight than the ways I tried before.

Did you get to the point where you were dangerously thin?

There’s a picture of me and the Spice Girls in which I had dropped to about six and a half stone. It’s only now when I look back at that pic, I think to myself, ’why couldn’t I have seen it?’ But you just don’t realise it. But the scary thing is for me at the time that was the perfect weight. And that’s just stupid.

When you were younger and going through this forM of body dismorophia did you ever tell anyone?

People may think you’re crazy, but it’s all about what goes on in your head and how you perceive your body! those of us going through can’t help the way we think, it’s just the way we are. It’s funny, I host Porn Idol on a Thursday night and we get boys with all sorts of body shapes on stage stripping off. I know we poke fun at some of them in a good humoured kind of way, but I get so jealous of those guys who are a little bigger and confident enough to get up and do what they do. I think to myself sometimes, I wish I could get up on stage and strip off and be proud of who I am. But I’m not! I wish I could say I was actually proud of what I have instead of constantly saying to myself, ‘I hate this! I hate this!’

It’s strange to hear this from you as we have this perception of a very confident man?

Well,you know how they say that comedians are more than likely suffering from depressed,… What goes on behind a closed door isn’t necessarily what is going on on the outside. I am happy talking about it now because I hope that someone younger than me can recognise what they are doing and actually do something about it before it’s too late.  I’m older now and have lived with it for so long. People keep saying to me I should have therapy for it but I’m like ‘I don’t want to go through that! Not now!’

What advice would you give people going through a similar situation?

But what I would say to other guys with an eating disorder is don’t do the stupid things I have done and do seek out help and learn to live with your body in a healthy way. Each person has to find the best way of dealing with it. For me running is my way of my dealing with it. Sure doctors can help, but for people with any addiction, they have to find their own personal way of overcoming the problem.

Read the full interview with Jeremy tomorrow in which he talks about the fight to rid the world of AIDS, how we have to continue to safe sex seriously, how he became the successful man he is todayand the future of Soho!

If you are living with an eating disorder check out this charity HERE or look online for more.