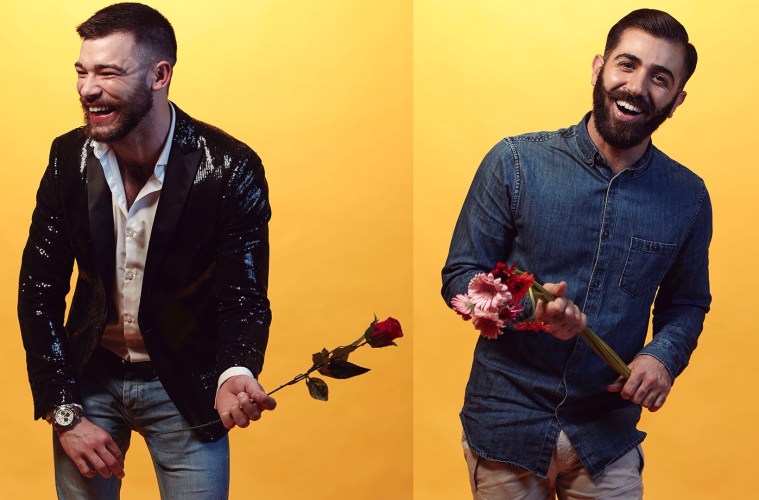 First Dates’ controversial dater Daniel May tells GuysLikeU why he will not date a camp man who wears heels and why he is irritated by celebs who make a big deal about coming out.

Would you be brave enough to go on a blind date on TV like the dewy-eyed romantics on First Dates? Probably not! But just how much fun is it watching the courageous guys and gals who actually do have the guts to rock up to Fred’s swanky restaurant hoping to find ‘The One’.

Two weeks ago, our hearts melted when 5ft6 Italian Paolo Delogu dined with handsome 26-year old general manager Daniel May. To start with, all seemed to be going rather well as they chit-chatted and flirted their way through their date. But when Paolo dropped the clanger that he had a penchant for wearing women’s heels, it was clear that Daniel didn’t share his fashion choices and told him that he didn’t think it was ‘normal’ for a guy to wear women’s shoes. The date, unsurprisingly, suddenly fell apart.

Daniel’s strong comments were like a red rag to a politically correct bull and he was swiftly attacked on social media by people who thought his opinion was offensive.

But should Daniel, as a 20something openly gay man, not be allowed to express what he finds attractive in a man? Should he not be free to say what his preferences are?

We sat down with the very open Daniel to chat about how he’s dealt with the negative response he’s had and why he’s adamant that he isn’t keen on camp men or celebs who make a big deal about coming out.

We loved watching you on the show, Daniel. You were a cutie. What expectations did you have about the guy you were going to meet?

I really enjoyed the whole process. I really didn’t have any expectations, I’ve learnt that when you go into anything in life with expectations you will very likely leave disappointed. What kind of guys do you go for in general in terms of looks and personality?

I’m really not picky these days! Anything with a pulse and a hole equals a very happy gay man. I jest, of course. As long as I can remember, I have never really had a type, all of my exes have been so different. If you were to line them all up it would look something like a police line-up parade. The most important thing for me to have when I go on a date is that special connection. Being a gay man in London these days it’s very hard to find. So when you find it it needs to be grabbed hold of and never let go. It’s Sod’s law, I’m always attracted to bad boys, the men who treat me like s**t, I think it’s manly due to the fact I like my hair to be pulled and my face to be spat in romantically.

What did you make of Paolo when you first laid eyes on him?

As soon as I walked in the first dates restaurant and I was greeted by Fred, I looked to my right and I instantly knew I wasn’t attracted to him at all. It was manly due to the god awful denim shirt he was wearing – do people still wear that stuff? But I thought, let’s just have fun, you only get this experience once.

We all thought things were going well until the mention of heels. Why was that such a turn off?

Do you know what, we actually got on really well, we had a laugh. We had a three course meal and we was there for nearly FIVE hours. Paolo didn’t ask for the bill in the way it looked on the show, we both said shall we get the bill as we came to the end of our dinner. I think First Dates editors changed it a bit so it looked like I was the villain.

So are you a man who doesn’t find ‘camp’ men attractive? Why does it put you off so much?

I really don’t find camp men attractive at all. I am gay for a reason and that’s because I like a man to be a man. I like a man who can kick and punch me in the bedroom, not scream like Bambi. I just wanna put a sock in their mouth and run out the house.

You said that you thought sometimes camp men do not help when it comes to the general perception of gay men – what do you mean by that?

I really do believe certain gay men make it really really hard for us gay guys who are not camp. Unfortunately we still live in a world where being gay in not fully accepted and there are certain gay men out there that I cringe at and they make me embarrassed to be gay myself.

There are two types of camp; the ‘fake camp’ which is a front – the only conclusion I can come to is that they are using it as protection. You know, like an overweight person will be the first person to insult or take the piss out of their own weight before anyone else does, and this makes me very sad. The other kind of camp I don’t have a problem with. I call this one a exaggeration of a personality. Like the jacket I wore in the show, for example.

You had a bit of criticism about your views. Were you upset by that?

I really wasn’t upset, I have a thick skin. Living in London as a gay man you have to have one. Of course we all wanna be liked but you won’t be liked by everyone.

Do you think people would have been as judgemental if you had said you didn’t fancy muscley guys who let it all hang out in a muscle vest?

I think a better example would be that if a straight couple were on a blind date and the man had said ‘I’ve got something to tell you, I wear heels’ and the woman’s reaction was ‘that’s not normal’ there would be no back lash. But men wearing heels, whether they are straight or gay, just really isn’t normal. Men just shouldn’t do it. It’s the same as a women sticking on a fake moustache… I mean, really?

Does it piss you off that in this day and age gay men are not really allowed by other gay men to say they do not have a preference for camp men. Russell Tovey also received criticism for making similar comments last year.

Yes it does REALLY piss me off! What pissed me off the most is that people think because we are gay we should accept and find everyone who is gay attractive. And when we don’t, we are bad people because out of everyone we should be the most understanding. It’s utter bollocks…. I am with Russell Tovey all the way, do you think you could hook us up? Lol!

When you were growing up did you have an gay role models?

I really didn’t have any gay role models if I’m honest. However I did love Elton John when I was growing up and I still do. Love his music.

Who are you gay role models now?

It does really annoy me when I hear stories about famous people coming out like Tom Daley, for instance. My first thought is just shut the hell up! My view is it’s all to do with their own publicity. Then they all of a sudden become a role model. Coming out does not make you a role model. I actually think that by you making it such a big issue, that you feel you need to come out and make a big story out of it, actually makes it so much harder for gay to feel accepted and to live a normal life. A role model for me is someone who is gay and doesn’t make a big deal out of it and just lives and enjoys life. We all have struggled as people…

Did you have an easy coming out process – what happened?

I was never in. When I was a child I used to wear my mum’s high heels and dresses.. It was so much fun… This is the point, I bet, when ignorant people will call me a hypocrite because of Paulo in his heels… But why? I simply have said I don’t find a man in heels sexually attractive. Sometimes on Halloween I dress up as a women, I love it, but I don’t expect to pull on That night

Finally, have you had any date offers since the show?

OMG it has been totally mental, my phone hasn’t stopped, I’m being stopped on the bus, tube in the street. Hopefully one day my Prince Charming will stop me and take my breath away.

TO READ A DIFFERENT POINT OF VIEW
HADLEY: ‘My Friends Think I’m Camp? Am I Offended Not At All’

NICK SMITH: ‘The idea being perpetuated that being camp is shameful is very damaging.’

First Dates is on Channel 4 every Thursday at 10pm

WE WANT TO HEAR WHAT YOU THINK

Where do you stand on this debate?

Do you find camp men attractive or do you think they embarrass the rest of the community?

Do you think celebs coming out are great examples to gay guys who haven’t come out yet?