‘I went from a bullied closeted bookworm to posing in underwear online!‘ 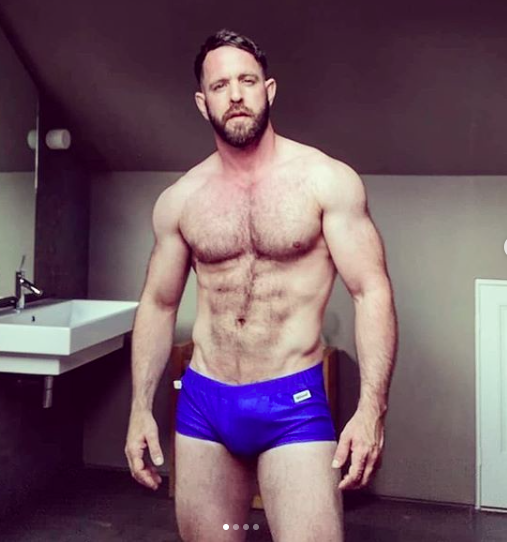 Meet Eoin, a 38 year old IT consultant and part-time underwear model from Dublin. You may have, er, come across him on the ‘Gram barely wearing anything but a smile. He’s the kind of  chap who most of us would file under ‘The Insanely Handsome Man Mountain’ category. He ticks every box!  Manly muscles? Check! A coating of fur? Check? Rugged handsome face? Check, check, bloody check!

So, it will come as no surprise, of course, to learn that Eoin’s lack of clothing, dashing good looks and rippling physique has gone down a storm with thirsty instafans, attracting over 70, 000 followers, who apparently can’t get enough of eyeing up his enviable physique. And who can blame them!

Here, the naughty naturist opens up about his troubled coming out experience and how he went from geeky bookworm to eyeboggling instahunk!

Thank you for sending me these 😘

So Eoin, were you one of those guys who knew from the outset you liked the fellas?

Not not really. I was a teenager when I started to suspect that I had no interest in girls,  although I would not admit it to myself for a very long while.

I so desperately wanted not to be gay. You see, I was brought up to be upbringing was very Catholic and I was very religious myself so I just couldn’t bring myself to accept being gay. Like most Irish families, I have a lot of siblings and come from a family that takes it’s Catholicism very seriously.

Obviously you’re out now… when did you tell those around you?

The first person I told I was a really good friend at work. I was 26 by this stage and this is when I first started doing stuff with guys. They just smiled and said that’s great and that I shouldn’t be afraid to tell other people.

Good advice. Have you told any of your nearest and dearest?

I couldn’t tell my parents, so I have never told them that I am gay! Well, I was living hundreds of miles away in France before I first started experimenting with guys. I actually had this whole separate life in France where everyone knew I was gay and had no issue with it. I even had a relationship of four years while I was living there.

Wow! So does any of your family know?

I have a number of sisters. I started off by telling two of them, one was very supportive and the other one was very against it. In time other people in my family asked me about it, some of them are totally cool with it. My brothers are totally cool with it. A number of my sisters have been much more hostile to it and never want to speak about it. Of my eight sisters three would never want to talk to me about it and five are ok with it.

Jeepers! That’s crazy! What were you like as a child –

In a word, I was ‘DIFFERENT’! I was shy and quiet in a family of load mouth extroverts. I had no interest in football or boxing, which was awkward as my DAD had been a heavy weight boxer and wanted us to do boxing. I was more interested in gardening, although we had no garden just a paved yard, so I used to do my Nan’s garden. I would spend all day in the garden digging and planting.

Probably going to go back to being scrawny and skinny as they are closing all the gyms here, so taking this for myself 😣

I also had a very peculiar love of languages. I can speak French, Spanish, German, and Portuguese and this obsession began at age seven when we learned a few french words in schools.

I said to myself I want to speak French fluently and one day I will live in France. I was a real bookworm and not popular at all in school.

Well, I was bullied for being too different. If I am honest I made myself a target. It’s good to be an individual and I’d encourage it, but I think I brought a lot of unnecessary suffering on myself looking back.

How did you deal with it?

I kind of withdrew, I prayed a lot, became a martyr with a victim complex a mile long. I didnt want t speak about it so I never told anyone about what I was going through. It was only when I went to Ireland that things changed. My mind was all over the place and only now looking back do I think I may have had bipolar depression.

Well, I was 20 and started hanging out with a friend from childhood and ended up partying a lot. The first drug I tried was skunk. I got horribly stoned and paranoid. I didn’t really enjoy the sensation at all. Later I started going clubbing and illegal raves in warehouse where I’d be taking E like everyone else. But I had a wake up call when one of my friends too way too much E and fell in the canal! I had to jump in and save him but he nearly drowned me. I then had to carry him home on my back because he couldn’t walk.

Wow! You’re a hero! When you were properly out did you throw yourself into the scene. Was it as you expected?

I wasn’t at all what I expected. I found it very difficult in the first few years. The rules of engagement are very different to those in the straight world. I fell in love with the first guy I slept with and he was young and immature and was too flirtatious with other guys and he left me on my own for hours on end in the gay night club whenever we would go out. One night I caught him kissing another guy. He didn’t see me but I was so angry so I downloaded Grindr and slept with the first guy who messaged me and I broke up with him the next day.

Wow! That’s a way of getting back!

Then I felt terrible about it, I confessed to my now ex-boyfriend and I beat myself up over it for three months and couldn’t eat I was so depressed. I lost so much weight that I looked skeletal by the end of the summer.  That was when I met an older guy, 16 years my senior and pretty much got into a relationship with him that lasted four years.

Is the gay scene a world that you enjoy now ?

I enjoy it sometimes – I’ve been a WE party ambassador for several years now – but I’m very wary of the gay world. Yes, it can be  a lot of fun, but it can also be a relentless machine that eats you up and spits you out

You cut a rather impressive shape these days, but were you always this buff?

For a long time I didn’t think I was muscular enough. I ‘d see other guys and wanted to be like them. It got me down for a long while.

Getting back into it after a weekend of excess in Barcelona.

Have gay guys judge you because of your body?

Sometimes gay guys can be the biggest assholes of any group of people. I think we can treat each other appallingly at the same time that we love to whine about homophobia. My body has always been an issue. But then I started to bulk up mainly because I was sick of guys looking right through me like I was not even there

Do you think gay men are obsessed with the body beautiful as some believe?

They are definitely obsessed with the body beautiful – there is no doubt about it.

Doing a photoshoot today in Manchester today for #BillandBrandon

A lot of gay men use Instagram as a means to boost there self esteem – are you one of them?

Well I’d be lying if I said that all the compliments I receive everyday have not boosted my self esteem but I have a healthy relationship with social media. I live or die by it.

These days you seem very body confident – you are always showing it off. And yo;ev also recently started an Only Fans page.

The photos I share are artistic nudes. I am not performing explicit acts in my photos or making sexual gestures.

What reactions do you get?

Are you put off by guys’ sauce reactions to you?

My back and my butt! I hate my crocked teeth

Have you got a fella?

Yes, I met him on Grindr, believe it or not. I like being in a. relationship. It’s not easy, but none are. One day I would like to get married. We get on so well, we are just so relaxed around one another. I think he’s more direct than me and I’m more easy going.

Galway is beautiful. You should visit it.

What would you say to your 12 year old self about the future?

Just be yourself and stop worrying about absolutely everything.

I can work from home, but I hate it, I miss the human contact in the office. During lockdown I was starting to lose my mind as I hadn’t seen my boyfriend since the 12th March. But all is good now. What I have learnt about myself during this time is that I really need human contact