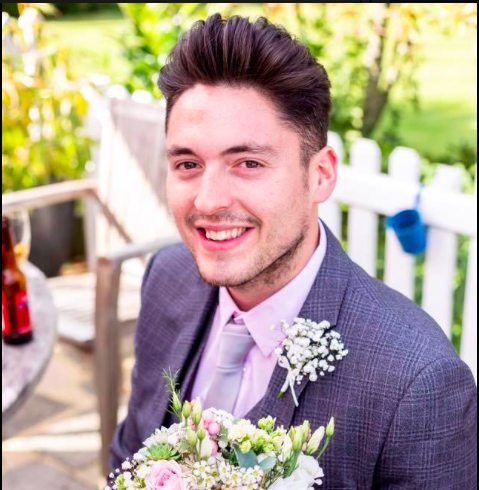 The word influencer is bandied about willy nilly these days and we’re still not quite sure what exactly it means. (Emperor’s new clothes if you ask us!) Anyway, man about town Daniel John has been described, among other things, as a micro influencer as he wafts around town from one showbiz party to the next. Others have described him as the gay Lizzie Cundy! Here, the handsome gay socialite opens up about coming out, dating and explains to us what he actually does.

ain't my fault that I'm out here getting loose…

So Dann, when did you realise you were gay?

The first inkling I had I was gay was in primary school. I must have been six or seven and we were playing kiss chase (with just the boys) and I remember being grossed out by it. But I was pretending to be really shit at running so the boy that was on would kiss me… It was probably my first gay encounter… Afterwards, it wasn’t until secondary school where two friends of mine kissed (year 7) and I felt so grossed out by it but slightly jealous but still I didn’t really understand it. It wasn’t until 2003, when I was 12, where I finally realised I was gay. I was going to this school in Scotland at the time and there was this boy called James, who was was disruptive young man and would throw books around the class. One day when I’d had a haircut, he complimented it and I was besotted. This was the same year Britney’s In The Zone came out and I used that as a drawing board for realising my sexuality.

Did you find it hard to deal with?

I didn’t really. My mom had always had gay friends and I was brought up with really theatrical people around me… I used to go to dinner parties as a kid and everyone would sit around the piano sing music from The Sound of Music or Meet Me In St Louis… it was all rather camp looking back on it.

So when did you actually come out?

I came out at about 13 or 14… Originally I came out as bi-sexual (what a laugh!).  I was OBSESSED with this boy at my school. I even wrote a play about him… He was slightly Emo, so I started wearing Emo clothes – wristbands and would ask him for recomendations on songs… I was OBSESSED. He asked me once on MSN if I fancied him and I told him I did and he was fine with it.

Who was the person you were most worried about telling?

No-one really. My mom and my dad had seperated and I didn’t see him for a further five years, so it was really weird to be OUT in my small town and then have to tell my dad when I was 18 that I was homosexual. It was really weird.

Was school a tough time?
School was a weird one… I was never bullied… I mean people said stuff, but I’d say stuff right back… BFG (big fat gay) was one thing they called me but then I’d call them fucking virgins… or Gollum. The Devon accent is quite farmer-esque also, so I used to rip ’em to shreds with that one.
Were the boys supportive?

50/50 split. The attractive, popular boys were lovely, which was odd, whereas the uglier (probably incesteous) chav-like boys weren’t as agreeable… but different crowds garnered different reactions. I was friends with a lot of really popular girls, so guys just had to deal with my antics. I once got into a Nivea fight with a classmate… now that was a riot.

Did you go through any forms of depression or anxiety?

We didn’t have things like that when I was growing up… well it wasn’t talked about anyway! There was a moment I lost it when the chav boys in Science printed this horrible picture of me and threw it under classroom doors. I complained to a teacher about this constant abuse and he said “well if you put pictures of yourself online like that, then what do you expect?” I told him he was a tosser and a waste of time on earth and I got put in detention for a week… can you believe it?

Did you throw your self in the scene?

I used to go out clubbing with my female friends at 14/15 but I didn’t explore the gay scene of Plymouth until I was 17/18. I remember the first time I ever went out actually. I met a boy of LadsLads at Plymouth Bus Station and Britney’s Circus album was on the jukebox… I must’ve looked about 12. We danced and drank all night and then we kissed in the rain (no lie!) and he took me back to his house and made me Marmite on toast. I didn’t particularly like Marmite, but I took it anyway.

Were you a romancer?

I’m a hopeless romantic, so I guess so… I like nothing more than lying on my lover’s chest, watching TV, playing with them and just feeling them breathe. It sounds weird, maybe a little spooky but I like it. I like drawing circles on people with my fingers… Not really sure why. Must be a comfort thing.

Did you have any body insecurities growing up?

Not really insecurity but the BFG comment deffo stuck in my brain… I had a conversation with a neighbour once and I said “I can’t change my height, I can’t change my sexuality but I can change what I bloody put down my throat” and I did!

Looking back at school what do you think schools should do now to help LGBT kids throughout that time?

I think there’s more exposure to LGBTQ+ nowadays. When I was growing up we didn’t really have any… you were known as “Oh that’s just Dan. That’s just who he is”. I dunno if it made it simpler or easier…all I know is I came out in year 10 and then in year 11, about five boys came out… so perhaps I was an influencer from an early age. I would love to go back to school and talk about LGBTQ+ youth… I’d be moved to tears. I’m doing quite a bit of volunteering over the next few weeks with the homeless so maybe I’ll move over to the LGBTQ+ youth.

Euphoria hits a high at a party… you can dance and revel in the excitement of others. It’s so carefree… there’s no words to describe it. I love to just speak to people I don’t know and take in their story. Even if it’s for five minutes. I find people so interesting. The one thing I find so weird about having exes is they all these secrets about me and I know so much about them but we don’t speak anymore and were not associated… how is it that you can know so much bout one person and not know them anymore? It’s weird…

What do you actually do as a day job?

I was a retired music blogger but now I am writing for an entertainment website to pay the bills.

How do you get invited these parties? How can other boys get to live your lifestyle?

Doing the pop blog got me introduced to a plethora of wonderful PRs and influencers, so somewhere down the line, someone always has a party they’re going to, or someone wants you at a party. I find it really funny that one photo of myself and a few stories is all an agency wants…

Do you enjoy being an influencer?

It’s just odd… I feel like I influence people to turn off their social media. Haha. I also feel like sometimes we’re all so swept up in what’s on social media that actually, maybe there’s more going on behind the lens that we don’t know about.

You’ve been described as the gay Lizzie Cundy

I like Lizzie so that’s a compliment for me. I’m not half as glamorous as her though.

What do you like about the party circuit – do you not get bored of seeing the same old facelifts?

I like meeting new people. I always try and take different friends with me so I don’t feel like it’s super repetitive.

Is it a community or can it be an empty scene?

It’s 100% a community… There are nights when it’s just me, Victoria Clay and Jodie Weston dancing and having a ball and it’s so carefree and nonsensical… I think if your agenda is right, then you can have a good time… I think it’s really sad when you see reality stars chasing the paparazzi for their picture to be taken… I just think to myself… what is the end goal? What do you plan to get achieved? No-one’s interested in seeing your picture dearie.

You rub shoulders with a lot of reality stars – will we see you on a reality show anytime soon?

I want to have kids and I’m aware that I can be quite a polarizing figure, so whilst I would love to go down the reality show route, for the sake of my future offspring, I don’t think that’s a good idea. If I were to do any reality show… I’d do one that required learning a new talent – Dancing On Ice maybe or Bake Off… I recently went to a baking school and it was lots of fun. Oh and anything that requires me going on a date. When I was younger I appeared on a few reality shows like Dirty Digest, The Audience and The Vanessa Feltz Show… what a laugh.

What’s the dream – what do you want to do?

I’d love to write a book and be a house husband.

Have you found love – is it easy these days?

I fall in love far too easily. It’s so difficult to find love nowadays because no-one wants to put the work in… they want the quick fix… The last guy I was with, I had the most awkward sexual encounter and because of that… he decided it wasn’t going to work out and I just think to myself ‘oh well, we’ll try it again’. Maybe I just sound super desperate.

Are you an app kind of guy?

No, but I am putting myself out there. It’s a little out of my comfort zone. Saying that, I have met my last three guys off  of Instagram, so maybe I am an app guy. I have put myself on them but I just don’t imagine that is how I’ll meet my King… like I can only imagine the embarrassment of saying “I met my husband off Tinder”. I think “I met my husband down a back alley in East London sounds way better”.
Do you like the gay scene
The gay scene is a perplexing one. I find it internally quite homophobic and we seem super sizest (even myself with changing my weight). I know that men like skinny guys, so I maintain myself to a skinnier shell… I’d love to go to Pizza Hut buffet seven days a week… There are moments (generally when a tragedy) when we all come together and it’s so wonderful and warm. The one that sticks in my mind is the Orlando tragedy… It was amazing to see so many people turn up at Old Compton Streeet and then end up at the Admiral Duncan’s for a sing-song… I got very pissed and ended up singing Britney’s ‘Everytime’ while sat on a chair and sobbing my eyes out… tone deaf too…