“I escaped the Manchester bombing unharmed, but the memories left me seeking help!” 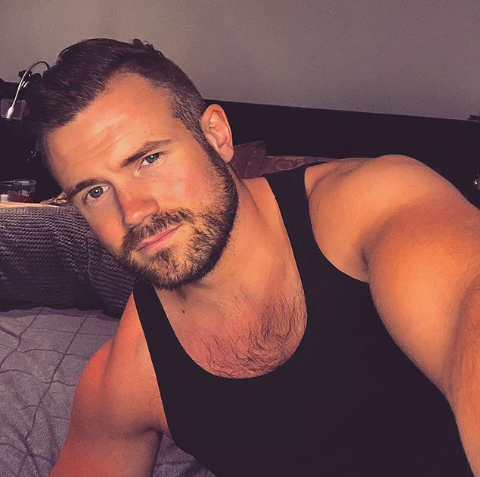 Podcaster, teacher and rugby player Christian John has marked the anniversary of the tragic Manchester bombing with an online post paying tribute to the twenty two innocent people who lost their lives.

In a heartfelt Insta post he wrote: “3 years today we lost 22 innocent people. 22 lives that were taken so cruelly. It’s hard to forget the nightmare, but I hope they are still dancing, singing and cheering in heaven like we were during the @arianagrande concert together ❤️ One last time I want to be the one who takes you home ❤️ 🐝🐝🐝🐝🐝🐝🐝🐝🐝🐝🐝🐝🐝🐝🐝🐝🐝🐝🐝🐝🐝🐝❤️ #22bees#22beesformanchester #arianagrande#manchester #neverforget#neverforgotten #instagram

3 years today we lost 22 innocent people. 22 lives that were taken so cruelly. It’s hard to forget the nightmare, but I hope they are still dancing, singing and cheering in heaven like we were during the @arianagrande concert together ❤️ One last time I want to be the one who takes you home ❤️ 🐝🐝🐝🐝🐝🐝🐝🐝🐝🐝🐝🐝🐝🐝🐝🐝🐝🐝🐝🐝🐝🐝❤️ #22bees #22beesformanchester #arianagrande #manchester #neverforget #neverforgotten #instagram

But his touching words are more than just a tribute to the victims of the terrorist attack, as the tragic events that took place at the MEN arena on the night of May 22 impacted greatly on Christian’s own life as he was leaving the arena when the explosion occurred.

Speaking to GuysLikeU recently, the handsome teacher recalled the horrific events of the night and the after effects it had on him. “My friend James and I decided we wanted to leave the gig before the last song so he could catch his train home. But when it got to the last song, he decided to stay with me and then I agreed I would drive him home,” he recalls.

“As we were just leaving the arena into the auditorium, the bomb went off. The sound of the explosion was terrifying and then cries of the people screaming in agony is one I will never forget.” 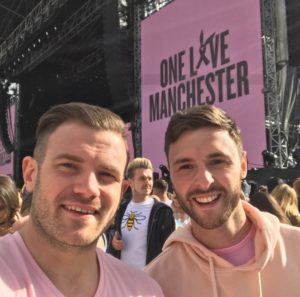 In spite of his fear and confusion, Christian says that when he saw children wandering around alone and scared, his teaching instincts kicked in.

“I was lucky enough to walk away unhurt, but the things I saw and heard scared me and they left their mark on me,” he confides. “After the bomb went off, I saw lots of children separated from their families and my teacher instincts took over to help them. It took a long time to get home that night and I barely slept.”

Looking back, he believes his delay in leaving the venue may have saved his life. “If we had left early who knows what would have happened?” he admits. “The concert had also gone on slightly longer than was meant to so there could easily have been more casualties if it had run to schedule.

He adds: “The next day I went to work because I wanted the children to know I was OK and that I was being strong. However the memories of the night before crept up on me and by lunchtime I had a breakdown and was sent home.”

In spite of the shock he was suffering following the traumatic events, Christian felt it unnecessary to seek any after care and that time would heal the pain. “I knew there were so many people who had tragically lost their lives or had been left physically scarred by the attack,” he said. “so I felt that it was unnecessary for me to seek help even though the experience lingered with me.”

However, as weeks passed, Christian suffered from more flashbacks and crippling panic attacks. “A few weeks past and the same thing happened when I was out with friends and an Ariana song came on in the club,” he recalls. “All of a sudden I had a panic attack. Luckily my best friend was there to get me out and call my husband who came and picked me up.”

Loving the sun whilst staying at home! All my love and support to those hard working NHS staff and carers out there protecting our community and putting their finger up to COVID19! 💙 #lockdown #sundayfunday #sunbathing #nhs #nhsheroes #instagay #gaysofinstagram

Concerned colleagues suggested that Christian open up about what he went through but admits he feels as he came away from the enrage unscathed he feels like he didn’t deserve any help. “My work invited councillors in to help me which was helpful, but to this day I still feel guilty for speaking to them or having these outbursts. I am fortunate to have a very understanding husband who helped me understand that what I was going through was completely normal considering the circumstances – I am not sure what I would be like If he hadn’t been there for me.”

He added: “My mate James was very strong and to this day still calls to see how I am and we go and visit the sight each year. We also then went to the One Love concert, which was a celebratory day I will never forget.”

These days, as well teaching kids in Manchester, Christian has launched an LGBT sport podcast called Ruck My Life, which has just been nominated for Podcast of the year. Vote for him HERE