“When I was kicked out of home for being gay, I started a new life!” 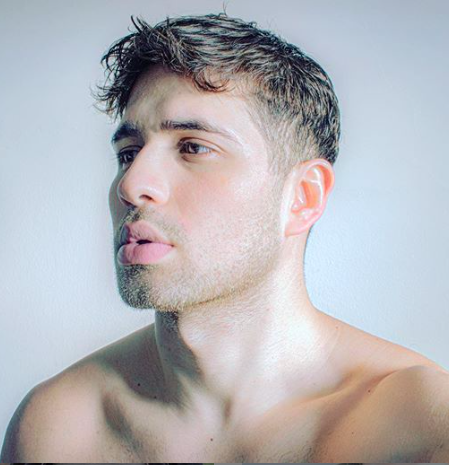 These days we are so used to hearing happy coming out stories that sometimes we forget that for many gay guys the experience is not exactly a bed of roses. Sometimes, families are ripped apart and lads and lasses are forced to embark on a new life alone. Here, gorgeous interior design student Carlos Izaguirre, 25, opens up about how his mother’s reaction to him being gay changed his life forever.

Let’s start at the beginning. Did you know early on that you were gay!

Yes, I think I  always knew I was gay, but I kind of tried to convince myself that I wasn’t because I knew it wouldn’t sit well with my family. I actually wanted to convince myself I wasn’t. My family didn’t like gay people and their prejudice poisoned me a little bit so that I started to believe that I didn’t like the gay lifestyle. My mum, you see, was incredibly against anything she considered gay. If I played Lady Gaga in the car, she’d ask me to change it because that was what gay people listened to.

Wow, that’s tough. So did you try to stifle your feelings or dis you have any gay experiences?

When I was at school I met this guy who was my friend’s cousin. He came to join my school for his last year and was two years older than me. I remember just staring at each other. Then one day we met near a McDonalds where I was formerly introduced to him by my friend. We hit it off and after we said goodbye, we both looked back at each other in a flirtatious way. From that moment on, I couldn’t stop thinking about him, even though I had completely forgot his name.  Then out of the blue, he sent me a Facebook message to say ‘hi’. One day I invited this guy over to play X-Box and one thing led to another and we ended up in my bed. Whome we were getting together, my mum came home early and I had to hide the guy in my wardrobe – naked!

Wow! How long did it take before she found out?

She suspected that I was gay and she forced me to tell her and her reaction was terrible. She slapped my face and kicked me out of the house. In that very moment my life suddenly changed beyond recognition. But that day was the beginning of my new life and I have been by myself ever since.

That must have been a very devastating time for you.

I was completely surprised by her reaction. But I’ve always been very pragmatic so thought to myself ‘well, that’s it, let’s get on with it…’ That said, there have been times when I wished my life had been different and I have constantly asked myself, ‘why me?’ Having a mother like mine was the biggest challenge I’ve had and in some ways it’s one I’m still dealing with.

At the time, did you plead with your mum to understand who you were?

Not at all! My personality would never allow it. I had to walk away because I was pushed to do so and then let my life fall into place. I have always tried to keep my insecurities to myself. However, there were times when I couldn’t hold it in anymore and I would message my mother terrible things, blaming her for my misery. I was lonely. I used to feel a terrible anger toward her and I told her once that I felt she was dead to me. I said, ‘I’d rather have a dead mum than one who is alive and does nothing to fix our relationship’.

So when you were forced out of your home, what did you do?

When she kicked me out I had to rethink my entire life. Not only had she kicked me out, she also cut off all my financial support and threatened that if I asked my grandmother for help she’d tell everyone in my family about my sexuality. I couldn’t risk any more judgment so I started to look for other ways to live. I finished school when I was 16 and went to university, studying international business. While I was there I met a few friends who looked after me. There was one particular girl who sheltered me for a long while. At the same time I met a gay couple who offered me a job in their interior design firm – it was out of generosity because I had no idea about it whatsoever. It was then when I was able to get myself together and sort my life out. I continued to learn and I soon became enchanted with interior design and decided to pursue that career path.

Walker there is no path, you make the path as you go –

You must have felt so alone at this time.

I did, especially at times like Christmas and Mother’s Day – any occasion when you’re supposed to be with your  family. However, I have been lucky to have met amazing people along the way who have always made me feel at home. I can deal with the situation much better now and I’m used to my own company, and I actually do enjoy it in spite of the fact I am a bit of a loner.

Was it hard finding the confidence to stand on your own two feet?

When my mum turned her back on me I saw it as the greatest opportunity to live my life the way I wanted… I was fully conscious that the days ahead were going to be challenging but I was up for it. I was hungry for life. I am a very ambitious guy now, but 18 year old Carlos was something else so I am lucky that I’ve done so much in so little time.

How did the experience affect you?

In honesty, it hasn’t effected me that negatively in the grand scheme of things. However, I would say, it’s affected my relationships with men. I have hidden my insecurities and vulnerabilities which may have made me appear a bit less empathetic to the outside world. I think perhaps I am too much of an individualist to have a successful relationship. I think people have a ‘perception’ of me that is the opposite of who I actually am. I am, in fact, a very insecure guy and probably more vulnerable than most. I am profoundly empathetic and sensitive but I tend to hide that and project the opposite so I don’t get hurt.

But there must be some people who know the real you.

I’ve only opened up about the real me to a very few people. One of those was my second boyfriend but sadly when we broke up, he used everything I had told him against me to hurt me and said to me, ‘Now I know why your own mother doesn’t like you!’

What an awful man!

That was a big lesson for me about showing my true self. Projecting the complete opposite of what’s really inside has made life so much easier.

So what have you learnt about yourself during this experience?

That the more I think I know about more myself, life tends to prove to me that I actually know very little. I have high expectations but I know that achieving certain things is sometimes impossible.

What advice would you give someone who is going through a similar experience?

Stand up, dust yourself down and move on. Be the best version of you that you can be. Be wary of your decisions. Go and make mistakes – but don’t blame anyone for them. It’s just life and the problems you face now will turn out not to be as bad as you think!

What is your relationship like with your mum now?

It is a lot better. I am pleased to say that we currently have a very healthy relationship. We speak everyday. I don’t know if it is because the quarantine is making us a bit closer. But we reconnected back in 2017 when I
suffered a stroke. She came and stayed with me in hospital and looked after me for a couple of months. Of course we had our ups and downs but she actually met a longterm boyfriend I had at the time, and surprisingly she got on better with him than with me!
Since then, I was able to sometimes talk to her about my feelings towards boys and she’d listen and give me feedback. she’d always say; ‘I don’t share what you are, but I respect it…’ But sincerely she is learning to live with it and accepting it progressively.

My day to day – Picturama spent the day with me to capture every moment of my day and my work… was a great experience- thanks @picturama.co.uk

That’s so nice to hear. You’re in a good place now. How has the gay scene treated you?

I’m a bit bored of it sometimes but it keeps me distracted. It can be draining and repetitive. I was more excited about it a few years ago… Now I think I want something different, more stable.

I’ve had disappointing experiences, not terrible.

Good question, depending which scene perhaps. I think it is possible. I think it’s about being at the right time and place, I’m sure ‘the one’ can be anywhere.

Yes, of course! I recently fancied this one guy and I believed it was something rather special. But sadly, it wasn’t for him – he wasn’t invested at all, so had to move on, sadly .

Do you believe in monogamy – or is that too heteronormative?

You’re a handsome guy – were you ever insecure about your looks?

Yes, I still am very insecure about my looks. Being part of a society that is so obsessed about the way people look it’s kind of impossible to not to feel that way. There is always someone who I feel is better looking, has a better body, is more handsome and so on. I can be incredibly conscious about the way I look. My hair, my clothes… I stop being conscious after the third glass of wine!

I try to, but I also try to keep a balance to not to be a slave of that lifestyle.

When there's a will… there is a lawyer. #england

Do you feel a pressure to look a certain way within the gay scene?

Yes, I think if you don’t look a certain way people wouldn’t give one the chance to even show what an amazing human being you can be.