THIRSTY THURSDAY: Who the bejesus is this handsome NHS clapper? We reveal all! 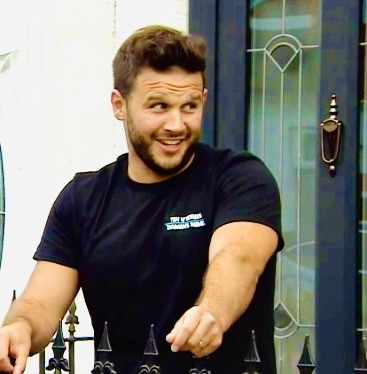 Who was the handsome opera singer on the BBC’s Clap For Our Heroes show? UPDATE: We reveal who the talented fella is!

Thursday. 8pm. It was time once again to get off our sofas and offer thanks to the NHS heroes who have been bravely looking after men and women suffering with Covid19. But little did we know that we’d be in for a little treat as we watched the BBC coverage of the great British public coming together to show their support.

Here he is: once more before a street in awe…

As folks clanged their saucepans together or enthusiastically clapped their hands red raw, the Beeb cut to one young fella in Cardiff singing opera at his front door. And what a divine vision of support he was. Yes, it might sound a bit pervy, but in these pandemic times of madness, we need things like this dazzlingly talented young man to keep us all chipper.

Not only were his vocals worthy enough to see him in headline a west end show, the buff handsome chappy looked like he’d just stepped off a rugby pitch. Sadly, before we were able to commit him memory, he was gone in a flash, leaving us with just one question: WHO THE HELL IS THIS MAN?

UPDATE Well, we can now reveal that the fella in question is Trystan Griffiths a rugby loving member of the Welsh Opera Company whose booming vocals have been making the news of late. Speaking recently, he revealed that his wife – yes, boys, wife, with whom he has a gorgeous little girl –  persuaded him to entertain the street with his vocals.

Getting into character ready for L'enfant et les sortilèges!!

“After returning from France, the clap for carers had started and my wife and neighbour persuaded me to give the street a song like some of the Italian people had been doing,” he said. “The following week I could see people on the street were hanging around like they were waiting for something after the clapping had finished so I started singing again.And basically it’s become a thing now every Thursday night! It’s the only singing I’ll be doing for a while now as all my singing contracts have been cancelled until at least September, unfortunately.”

The talented singer and devoted husband and father has spent the past couple of years performing shows across Europe and recording. So let’s keep our peepers peeled – we have a feeling we will see more of gorgeous Trystan!

Check out this link to see the dashing devil do his stuff at 4mins08 on iPlayer.