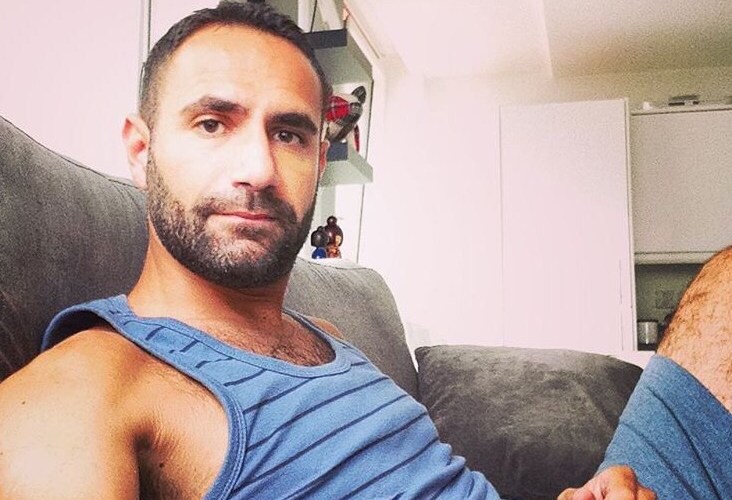 Introducing GuysLikeU’s new resident poet, Rich Harris, who opens up about the good and bad things that inspire his amazing poetry!

Meet 38-year old Rich Harris, a Faults and Asset Manager at London Underground, who lets loose writing poetry in his spare time. Not only does he write it, he performs it too in a series of short clips that he posts on line. And some of them are hilarious, thanks to his charismatic and captivating delivery. So much so that we at GuysLikeU have asked him to knock out a poem for us every week starting from next week, to which he’s said ‘yes’! Result.

But not all of his poems are light, frothy and fun. Some of them are dark and sombre, which he says, reflects aspects of his life. Here, the super-talented fella opens up about what inspires him to write and opens up about on some of those dark times from which he has based some of his more thoughtful poetry on.

Rich, your poetry is fantastic. What got you started?

I started writing poetry because I knew I could. I don’t mean that to sound conceited but I’ve always been excited by words, short stories and rhymes. When I was much younger I had three ambitions  to aspire to; to be a magician, to be Superman or to be a writer. I had no talent for magic so it was whittled down to the other two. And I haven’t exactly ruled out the Superman option just yet. I’ve always been able to put rhymes together very easily and I used to write and dedicate ‘odes’ to my work colleagues. I got a very positive response from everyone over the years and lots of encouragement to take it more seriously, so I started to believe that I should try and pursue this and develop it where I can.

Tell us about what inspires your stories?

I’m working on two projects at the moment; my book of poems for kids and young at heart adults, and a selection of dark poetry so both have very different inspirations. I have a very childish outlook on things sometimes, I like the simplicity of it and just try to pick characters who are relatable. Sometime I will think a long time trying to find an idea, and sometimes I have so many that I can’t scribble them all down fast enough. So inspiration comes from many places.

Some are funny like Silly Dares (below) – is there a hidden meaning in them?

The kids poems are my way to champion any underdog in life; I’m a strong believer that anyone can achieve whatever they like and it doesn’t matter if they feel they are not good enough, strong enough, pretty enough, fat enough, skinny enough, tall enough etc – as long as you have fight and belief in yourself then that’s all you need and its really not all about winning, it is about having a go and not regretting missed opportunities. I love how we are all so different and I feel passionate to show people who may have low confidence or self esteem that they are special, amazing people.

Your darker poems are very different, aren’t they?

The darker poetry I write is my interpretation of the very thin line between love and hate. Sometimes you have to really love someone in order to hate them; lovers who can’t bear to be apart for example, if something happens and the love is separated, the love that was there may turn to anger, jealousy and potentially hate. I’ve had people that I really cared for but it didn’t work out (for whatever reasons) and when I look at those relationships now, I’m more angry that they didn’t work and a darkness has stained them for me.

Do you include these tough times in life in your poems?

I think even in my funny poems, they are a bit poignant in places so I think the sadness is always there, just portrayed differently. One piece I am very happy with is called A Lonely Robot which is autobiographical and is about a robot looking around and seeing everyone else falling in love but isn’t able to himself and accepts he will probably be alone forever. It’s a very sad poem but I find a lot of beauty in sadness.

Have you written poems about your sexuality?

Not specifically about mine, no. I was once stumped for an idea so asked Twitter to suggest something and they suggested a poem on ‘love equality’ so I wrote something about that turned out very nicely. I’d like to write a poem that speaks to LGBT people though; its in my mind to try something but so far I haven’t gotten around to it.

I came out when I was 21 and at a NYE party. I called my parents at midnight as one does, and then after was urged to call them back and tell them I was gay, which at the time seemed like a wonderful idea. It was a bit messy and I understand it was a shock for them so we didn’t speak for around a month which was pretty hard. But my family are absolutely ok with it now. Telling my family was the hardest thing to do but once I did so, I felt like a huge weight was taken from me and it didn’t matter who else cared or didn’t care – as long as they knew the truth was all that mattered.

You’re 38 and single… Has this inspired The Lonely Robot? You’re a hoot, how come you’ve not been snapped up?

Oh, I don’t know – I don’t suppose it helps that underneath my clothes my entire body is covered in scales? I probably have high standards but I have only really liked two people a lot – when the spark is there, its really there and I guess I just haven’t had that connection with anyone else yet. If you really want a green BMW and you cant stop thinking about it because it excites you so much, when you go the car lot and they offer you a dark blue Volvo, that’s not what you want. Sure, you can take it – but you may not be 100% happy with it. I don’t want to accept a relationship just because one is there. I want to really want it. I guess what I mean is I don’t want to drive around in a blue Volvo for the rest of my life, leering at every green BMW I see wishing I had that instead.

We can tell from your poetry, that you’ve experienced some dark periods. How dark did it get?

I’m not sure I’d describe them as dark but definitely pitifully sad. It’s a terrible thing to suffer with low mood and depression as I don’t think it ever goes away; at times its just easier to handle. I’ve had a couple of moments when I felt at my very saddest and thought I knew the only way out. My best friend took her own life and I know what suicide leaves behind. It’s a selfish thing to do, but sadly for some people it’s the only thing to do. I’ve also had my issues with addiction but I’m happy to say it never went as far as it can go for some people.

What do you do when you know a dark period is about to happen?

By the time I know its happening its usually too late to avoid. Usually I try to sleep my way through it. Its really hard to be around people because I just don’t want to talk or interact with anyone. Everyone deals with it in their own way I guess, for me its isolation and as much sleep as I can to not have to experience it.

Are you a fragile person? Have you learnt from previous episode of your past or could you slip back into old ways?

We are all fragile. I don’t think I would ever slip back into old habits because I can see how damaging they were for me. I can only hope that I keep a strong mind-set but who knows what temptations lay around the corner?

I like that I can make people laugh, I really get off on seeing people react well to something I do or say. Its very ego-boosting. And I like that I don’t smoke, and I like that I am a very accepting person. It doesn’t matter who you are, where you’re from or what you did – I can always see the good in most people.

What do you look for in men?

Ideally dark hair, a red jumper and quite a large face. Also, if there’s any 6’5, hairy, macho rugby players out there – please get in touch.

Write us a short poem to woo a man:

‘You smell nice, you dress nice, you hair really suits you

And your charming smile has me carried