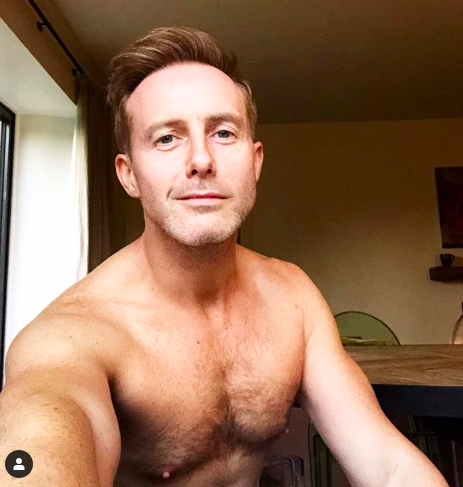 For the past twenty years or so we have harboured a soft spot for the wildly fun ‘H’ from Steps. He’s funny, he’s cute, can sing like an angel and has brought us a lot of pleasure over the years.

But never did it occur to us that beneath those primary coloured costumes that he wore while throwing shapes to tunes like Love’s Got A Hold Of My Heart and Scared Of The Dark, he was actually hiding such a bod to die for.

Clearly aware of his delicious secret and keen to let us know, the 43 year old star began teasing us earlier this summer by posting  a series of tasty pics of himself stripped to waist. And we were hooked.

As we all know, the perky popstar is one of the twelve stars set to skate for their lives on the next series of Dancing On Ice, due to air in January, so we’re hoping he gets flash some flesh during his routines.

As announced last week, the ‘H’ for hunk is set to make history by becoming one half of the first same sex partnership on Dancing On Ice, coupling up with gorgeous Matt Evers.

The news was met by universal praise, although we understand folks Strictly were peeved that that their rival show beat them to making telly history.

Grateful for the warm response after the news broke, H said: ‘Totally overwhelmed today… I’ll need some time to take it all in!! I’m just totally blown away by your incredible support and messages! Thank you so much.’

Attitude is a little thing that makes a big difference! Today.. I can, and … I WILL ! I’ll be saying this A LOT to myself over the next few months !💪🏻⛸❄️ Just finished a quick morning workout before my children get up for school … BOOM ! 💪🏻 Have a great day everyone!! 😘 #positivequotes #Positivity #positivevibes #workhard #Workout #morningworkout #gym #motivation #iceskating #dancingonice #Dad #TwinDad #Twins #GayDad #dancingonice2020 #happyfriday

‘You can’t expect to be old and wise… if you were never young and crazy’ ! Well, that’s what I’m channeling today – not sure if it’s young or old 🤦🏼‍♂️ !! 😂😂 Workout Done before the boys got up !!! 💪🏻 We’re now watching Willy Wonka ( the original !)🍫 ! I’ve just been hugged by my mini me’s and told ‘ I love you Daddy’ …. I cried! Our morning cuddles are the best 👶🏼👱🏻‍♂️👶🏼 #Dad #TwinDad #GayDad #Twins #Workout #MorningWorkout #Gym #Positive #CarpeDiem #seizetheday #PositiveQuotes #thethreemusketeers