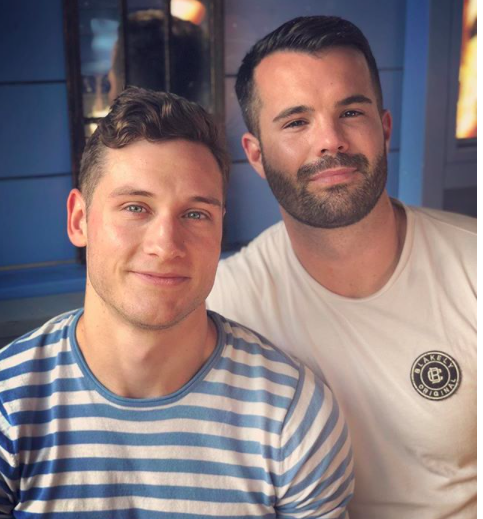 We know it still niggles some of you fellas but we have to face facts – gorgeous former bobsleigh stud Simon Dunn has been off the market for an entire year. Yes, the beefy Aussie who can barely keep his clothes on has been happily dating former long jump athlete Felix Maisey-Curtis (what a mouthful, eh?) since this time last year. Oh the humanity!

One year anniversary with this handsome man ❤️

The stunning couple made headline news around the world when they were snapped kissing on the rugby pitch. Although they were sharing an emotional moment, Simon explained that their touching smooch was also their way of sticking two fingers up at rugby player Folau who had made homophobic comments.

“We had won the league and my partner Felix was still playing,” Simon told us at the time. “After the game I went over to him to give him a kiss to celebrate, which most athletes do with their partners when they win. One of the team mates got a photo of that. So I posted it thinking it’s a nice photo, I could use my profile that there are gay athletes out there. Then I started to retweet it in response to Australian Rugby Union’s lack of response with regards to Israel Folau!”

But enough series stuff. To mark their first year anniversary please enjoy this gorgeous gallery of the sexiest pictures of the couple who have been described as one of the most beautiful couples in the world.

Can’t see anything, but I love you 💜 Happy Birthday @bysimondunn

@thtorguk thanks for having us! #charity #auction

Harassing the man of the match 🏉