How you can get to see even MORE of gorgeous actor Gregg Sulkin! 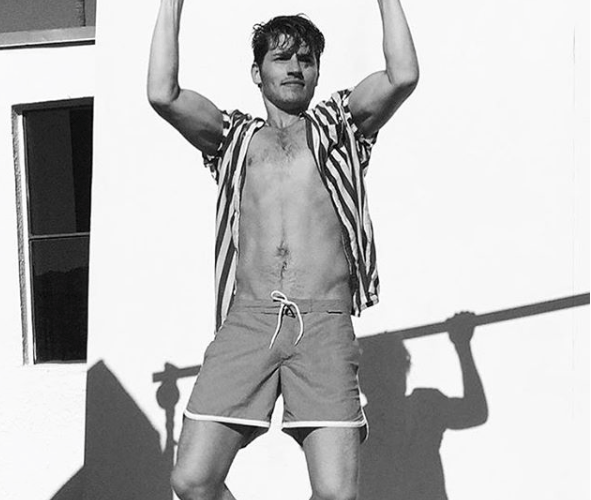 Well, hello there fella! And who the hell are you are you when you’re at home….

Gregg Sulkin’s his name and is the star of MTV’s Faking It, a cheeky comedy about two girls pretending to be lesbians to be popular. The show, which has finished in the States, has won a slew of awards Stateside, including a prestigious GLAAD gong for Outstanding Comedy. But we love it best because our dear Gregg appears to find it very hard indeed to keep his clothes on! Don’t believe us? Then download episode one of series two from iTunes and prepare yourself for a right eyeful. You won’t disappointed in the slightest.

But that’s not all. The British hunk – oh yeah, did we say he’s one of ours? – also has a horror flick called Don’t Hang Up due out in the new year and a film called Status Update in which plays a quarterback who pretends to be gay for a social experiment, so we can expect to see a lot more of gorgeous Gregg then. And we can’t wait. But in mean time, let’s just lie back and enjoy the spectacle of Sulkin! Grrr….

Would have been easier to stand on a box & pretend like I'm doing pull-ups but then my ego got in the way & wanted to do it for real.

Who's watching tonight's episode of @mtv_fakingit ?! You may get to see Liam in an extremely tight fitting but uncomfortable sailors outfit.

I never thought my career would result in me lying in the middle of a random ass desert in my underwear…. But here you go folks 🙈 #MumThisIsProbablyAwkwardForYou. @flauntmagazine @justincampbellphotography @mrmontyjackson @paulyblanch

Tune in TONIGHT to @mtv_fakingit on @mtv @ 9:30pm to obviously see my fully clothed. For Those interested, I tore my meniscus in my knee 12 hours before this shooting this scene, resulting in it being a similar version to hell. #FunTimes #ItsALimpNotASwagWalk #swollenrightknee #IceEveryTimeTheyCallCut

Who's watching TONIGHT?! Liam gets caught all bare….thank god we shoot in LA & not a cold destination. #FakingItTonight @mtv @ 9:30pm

If the pics aren’t hot enough check him shaking his booty on the wicked TV show Lip Synch Battle!

To see more pics and read an interview with Gregg check out Flaunt magazine. Otherwise stalk him on Instagram