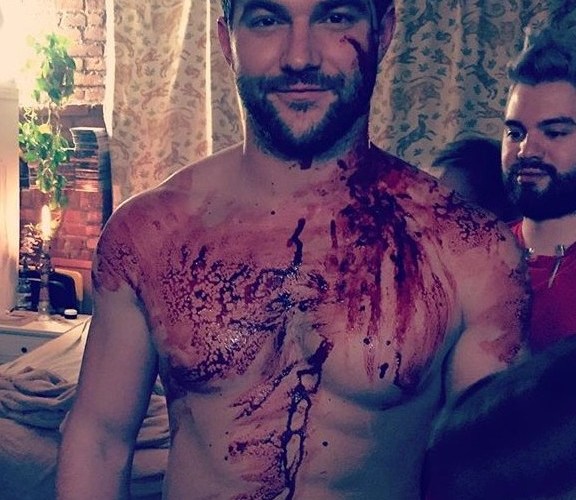 You may recall a few weeks back that we were giddy in love with the supercute DaddyHunt web series which saw two dashing neighbours fall hopelessly in love.

In fact, we were so damn enamoured by the heartwarming love story that we painstakingly tracked down its gorgeous star BJ Gruber for a chinwag, who happily told us he would be definitely up to film more episodes of the mini series. ‘I would shoot with those guys any day of the week,’ he told us, adding, ‘Jim (Newman, the Daddy!) has agreed to be part of season 2 of another of the web series I star in called The Queens Project, so I’m really looking forward to working with him again regardless.’

Well, to keep us happy until the potential new series hits the web, the kind folks makers behind the webisodes have treated us to a behind the scenes clip. In the two and a half minute clip, we see the cast audition, rehearse and muck up during filming. Best of all, we get to see the adorable BJ shirtless and looking superhot.

Meanwhile, here’s a glimpse from BJ in his next movie role in which he seemingly ends up killed by a vampire. We can’t to find out more! Stay tuned, folks!

This is directly after we filmed my death scene. It's going to be an incredible film. I can tell you more about it later this year. #actor #vampire #blood #underwear #masculine #scruff #film #independent #muscle