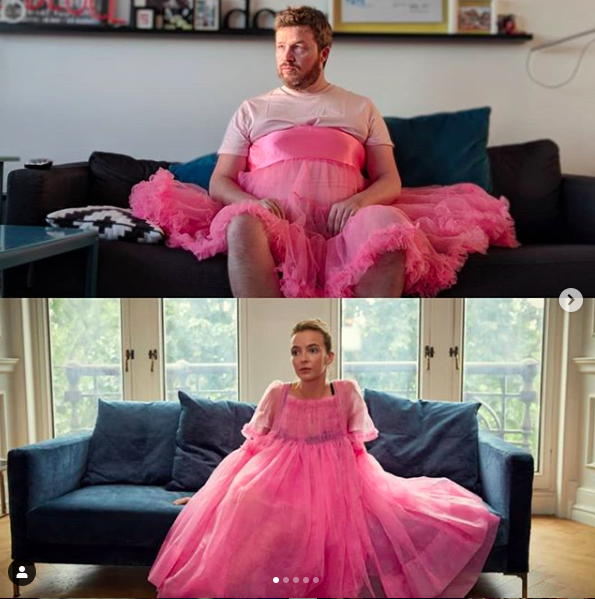 Fans of the telly drama Killing Eve have a few months left to wait before a second season of the darkly humorous thriller returns to our screens. So in the meantime, we hand over to a handsome UK PR Dominic Collett to keep you Eve-ites trundling along. Last Halloween, the fashion-mista had his social media following in hysterics when he turned up to a ghoulish party squeezed into a pink tutu in attempt to replicate Villanelle’s distinctive Molly Goddard pink frock. Not only did he steal her look with aplomb,  he was well ahead of the curve and rocked the look way before J. Lo and Anne Marie. Here, we give Dom the floor to explain his thoughts about why he can’t stop replicating Villanelle’s iconic outfit. It’s once in a generation that a TV drama captures imaginations with both drama on screen and through the universal language of style. For those who have seen it, Killing Eve was last year’s word of mouth sleeper hit and one of the main reasons for it being a must watch was it’s delicious sub-plot – fashion!!

Brit star Jodie Comer pulled off a blinder playing a psychopath assassin Villanelle. Her stand out comic performance delivered lines like “You should never call a psychopath a psychopath, it upsets them” and “I promise I won’t be naughty” and they will be etched into TV history along with her iconic Molly Goddard pink dress.

The zaniness and malice of her character’s look made it this year’s go too Halloween costume. The series made the dress and versions of it, the perfect look for any occasion in 2018 and  the good news is that this striking fashion statement can be easily replicated with a pink T-shirt and a pink underskirt tutu pulled up to your moobs.

Just performed at the #XFactor Final!

Don’t take my word for it, it’s versatile flair inspired Anne Marie at the X-factor final, even Jenny from the block she got a rock J-Lo got in on the act. It must be good no?

"Don't be fooled by the rocks that I got… I'm still Dommy from the block." 💰💰💰💰💰 Killing J-Lo's look! #jenniferlopez @jlo OMG @jodiemcomer your dress is everything and the costume that keeps on giving! #killingeve #pinkdress #WhatDomWears #pink #jlo

I don’t pretend to know anything about fashion so in the words of that old tanned chestnut Gianni Versace, who also had a stand out TV drama made about his death (from a psycho killer – I see a theme appearing) this year, I quote “Don’t be into trends. Don’t make fashion own you, but you decide what you are, what you want to express by the way you dress and the way to live.”

So I take licence from this and if I want to wear a pink tutu underskirt to the corner shop for a pint of milk or just to put the bins out, I will! And in response to anyone thinking I might be feeling a bit stressed out  “I had quite a heavy period last week, but other than that, I think I’m ok!”