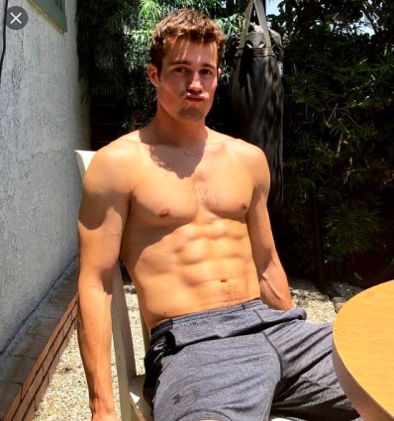 Hey boys! Who’s seen the mighty Hollywood, Ryan Murphy’s glossy new telly series about the movie business in the 40s? Fantastic, right? Even if the writers did go a little too far – in OUR opinion –  in rewriting parts of history.

But faults aside, the stunning seven part epic is a rip-roaring emotional rollercoaster ride that reminds us all that once upon a time the LGBT community and people of colour were treated abominably in society.

If you haven’t watched it yet, then check it out now on Netflix ASAP. And you’re most certainly in for a treat. For not only do you have a beautifully told compelling story to feast on, you are also introduced to a rather dashing looking actor called Jake Picking, who plays Rock Hudson.

Some of you may already know him for flashing his rippling physique in Dirty Grandpa and we are soon due to see him in the eagerly anticipated sequel to Top Gun, out later this year.

But in Hollywood, Jake enthrals the viewer with his charmingly dumb take on Rock, a wannabe actor who is desperately trying to break into the movies spite of his lack of acting skills who would go on to be an acting legend. However, Rock catches the eye of dubious film agent Henry Willson who promises to make him a success in return for, er, favours.

Thankfully for Jake didn’t have to endure any casting couch shenanigans when he first started out. His goofing around in class saw his teachers advising him that a career in acting might be the direction for him to take. However he never believed a normal guy like him could ever make it big in Hollywood and instead enrolled at New York University to study business and play hockey, even though Matt Damon and Ben Affleck’s former acting coach Carolyn Pickman had told him he had that special something.

There’s a snake in my boot!

Luckily for us, gorgeous Jake joined student productions and went to transfer to NYU’s Tisch School of the Arts. However, when it proved to be too expensive to do so, he dropped out and moved to L.A.

“I didn’t really know anyone, so it was lonely,” Picking told MTV. “You think of Hollywood and you think of the glitz and glam, and, like, the stars. It wasn’t that at all.”

Nevetheless, he was determined to succeed and watching movies became his “healthy escape” when he felt alone in the big city, feasting on films by Paul Newman and Rock Hudson. And his film waltching proved to be rather beneficial for him when years later he came face to face with Ryan Murphy during the casting of Hollywood. When asked what he knew of Rock Hudson, Jake was able to wax lyrical about watching classic movies like Pillow Talk, All That Heaven Allows, and Magnificent Obsession.

Hollywood is out NOW on @netflix

Landing the role of Rock, an actor who I real life stayed in the closet until his death from AIDS in 1985, Jake said he was determined to the character justice, admitting, “I felt like it was my duty to capture the essence of who Rock Hudson was and pay homage to his legacy,” he says, adding, “I wish he was alive today to see how far we’ve come. I think that’s the tragedy in his life, but I do believe he was a hero, because he progressed through that. He’s just resilient, you know?”

Check out Jake as Rock in Hollywood now on Netflix!