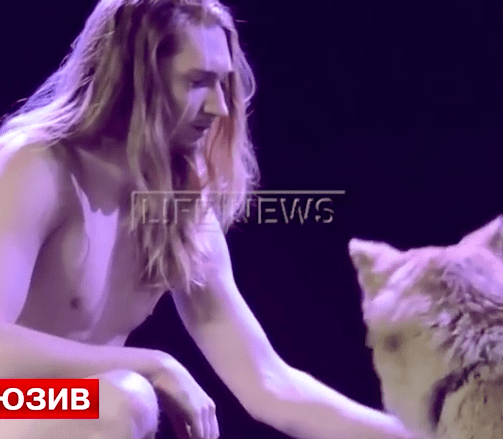 Over the years Eurovision entries have tried their darndest to catch the attention of viewers with some outrageous behaviour.

…or Tatu back in 2003 who threatened to share a lesbian kiss on stage.

…And then there was the UK’s Jemini who as a gimmick decided to sing horrifically out of tune. (okay, they claimed it was sound problems!)

Now Ivan, this year’s entry for Belarus, is set to the shock the world with a totally naked performance of his tune Help You Fly. But not only will he be singing in his birthday suit, the long haired larakin will be joined on stage by a wolf. Apparently. And from the looks of this rehearsal footage, that wolf looks a little peckish! So let’s hope there’s no ghastly accident and Ivan suddenly ends up, er, Ivana!

Ivan’s producer Viktor Drobysh has likened the performance to French Sculpture. ‘I think the beauty that will be in our performance is comparable to that of Rodin’s The Thinker,’ Drobysh said. ‘Can you imagine The Thinker wearing jeans?’

We actually think Ivan’s song isn’t too bad and doesn’t need any gimmicks. Check the song out and decide for yourself.

The Eurovision Song Contest takes place in Stockholm in May!