FLIRTY DANCING HUNK DAN: “My dance date made me believe in love again” 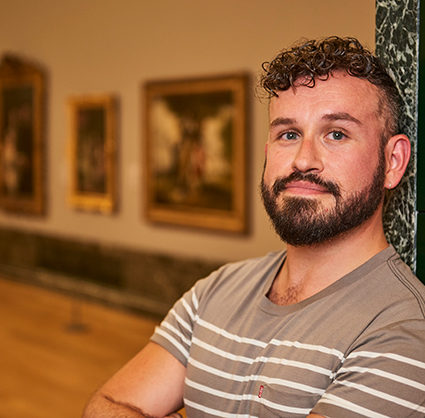 It’s the show that everybody’s talking about – Flirty Dancing, Channel 4’s delicious dating show with a difference. In it, lanky Ashley Banjo teaches two hapless singletons a dance routine in the hope that the intimacy will encourage romance to blossom between them.
In episode one, we met two supercute gay guys called Luke and Dan who were both looking for Mr Right and ended up throwing some wonderfully choreographed shapes in an art gallery to Strangers by Sigrid.
From the look of their broad, heart-warming smiles, we had high hopes that Cupid’s arrow had hit the right spot, but what really happened when the cameras stopped rolling????
We hooked up with Welsh rugby boy Dan to find out…
To find out what his titian love interest LUKE thought about Dan, click HERE 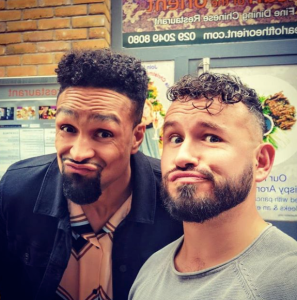 Dan, we loved the show, it had us in tears.
I was SOOO nervous waiting for the show!!  Watching it the first thing I said was “do I really sound that Welsh?!?!” – I mean I know I am from the Valleys but never knew I had such an accent!!!  I thought the entire episode was just beautifully done, genuinely had me smiling the whole way through.  I was already in tears watching Hannah and James’ routine before they even mentioned me haha!
How did you watch it?

I had a viewing party at my mate’s house who rounded up the gang.  Before the episode showed my friends were teasing me like “here he is, Mr Celebrity” and “come on show us your jazz hands”, but by the end of it they were silent and all turned to me with tears in their eyes and shouted “we want to find love like that!!”….I think they were impressed! 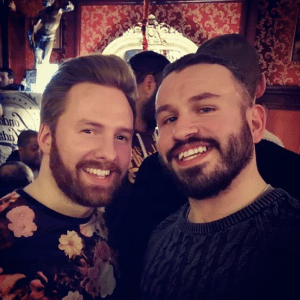 What were the responses from friends and viewers like?
The responses I have had on social media have been phenomenal; lots of love and well wishes from family/friends and even people I don’t know who loved the show.  I even got a tweet for TVs Dr Ranj!!
What made you get involved? Are you a natural dancer?
Well funnily enough I had broken up with a guy, and was feeling a bit flat when I saw the advertisement and thought “sounds like fun, why the hell not?! I have nothing to lose!”  If I am honest I felt a little sceptical at the concept, only down to my jaded view on dating, but thought I would at least get to dance with Ashley Banjo, but man did I soon change my views on that!
Have you danced before?
I have actually danced from a the age of 8, starting with an afterschool club in my primary school, leading onto dance retreats and starting some Latin and Ballroom classes, but gave it up shortly after starting secondary school where I started to realise my sexuality and always hearing “only poofs dance”.
Supportive!
I then was convinced by a co-worker to attend a social line dance class when I was 20, and on my first night was asked to join their competition team!  Everyone perceives line dancing to be the stereotypical ‘yee-ha’ country style, however, competition style line dancing is very similar to Latin and Ballroom competitions, just with cowboy hats!  I quickly fell in love with it and became five times European champion as well as World champion and twice World runner-up, both in solos and in couples! 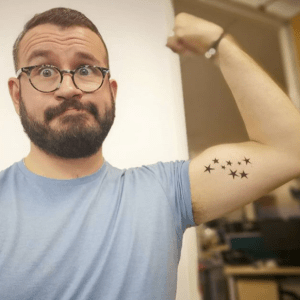 Wow! In the show you said a former relationship had left you with low self esteem – how did that effect you as a person over the past ten years or so.
Yeah my confidence was affected.  He was my first love, and it was very much a whirlwind relationship as we got engaged etc. It was an intense relationship and we were prone to arguements quite a lot where he would use my insecurities against me.
Have you met others along the way who helped raise your self esteem?
If I am completely honest its only over the last year to 18 months or so that I have started to learn and build from it.  I have met some amazing guys who had potential but never worked out for one reason or another…sometimes because of my confidence issues.
Has it been frustrating that you never had the confidence to approach men because of this last relationship.
It has! I seem to be fine if a guy approaches me when I am out, as I know there must be already some level of interest.  But walking up to a stranger and initiating something scared the crap out of me!  Even if a guy would give me the ‘eye’ in a club I would look away thinking “he wasn’t looking at me”.  Dating apps were not so bad as you had a barrier protecting you, but being exposed with the thought of someone rejecting you to your face is terrifying for me.
How has this experience changed your opinion of yourself?
It has massively changed my perception, its made me realise that I have more confidence than I give myself credit for.  And for the likes of Ashley Banjo to recognise that I had confidence, it allowed me to believe in myself more….that guy is a miracle worker, he should totally have his own chat show! 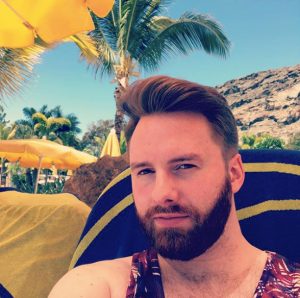 When you saw Luke for the first time how did you feel?
My first thought was “I am so glad I didn’t wear the same t-shirt”!!!  It was just so surreal, after hours of practicing with different partners and not allowing myself to build a picture of this guy I am then faced with my match.  I remember thinking he had a gorgeous smile and his hair was on point! But there wasn’t much time to take it in as I then had to remember the dance routine!  I think it was slightly easier in a way by not being allowed to speak, there was no fear of saying the wrong thing, but could let the dancing do the talking for us.  Plus who gets to say that they had a first date in a gorgeous art gallery after hours?!
Did Luke tickle your fancy?
It was pretty much a blur; I know I keep saying it but was such a surreal moment.  I remember I really liked his smile and his energy in the routine, and the boy held his own!  There was definitely chemistry when we were dancing, and I remember he smelt great too haha. 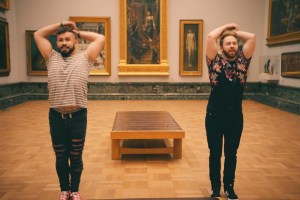 So you met again after the dance date – so what happened next?
Ah, now I am going to break everyone’s hearts now.  We had a lovely time together, and got on so well but both agreed that maybe we were better off as friends.  Dancing with Luke was amazing, and there was definitely chemistry between us as we vibed off each other. But when we then met we realised that it didn’t translate to that spark enough for a relationship.  We are actually great friends now though, and always texting and meeting up.
Oh no, what a shame. We had high hopes.
It doesn’t take away how awesome this concept is, and I would 100% do it all again….probably was the best date I have ever been on!
Has it made you more confident on the dating scene now?
It has! I have actually gone and approached a few guys on nights out; some successful and some not so.  But I have realised that you are not going to be everyone’s ‘cup of tea’ in this world, and just because they may not be interested in you doesn’t mean you are unattractive or undesirable. 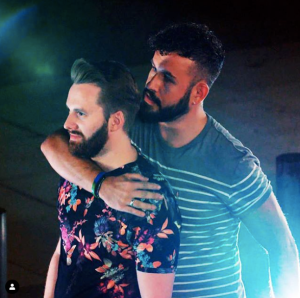 That whole scene in the museum was so romantic. Do you look at dating in a different way now?
OMG yes! I think the whole dating apps thing had left me and a lot of people feeling negative towards dating.  Romance seemed to be dying, and everyone was out for a quick fling or hook up, and which is why I probably was cynical that I wasn’t going to find anyone even on the show.  But meeting Ash, and working with him made me fall in love with the whole concept.  By the end of it I was convinced the dance routine was going to be my first dance at our wedding.  And yes, it may not have been the ‘happily ever after’ for Luke and I, but it has made me believe in love, romance and meeting ‘the one’ again.
Can you take us back to when you came out?
I struggled with the idea of being gay. Coming from a small mining town in South Wales I didn’t really understand the concept of ‘gay’ as I had no references to relate to, so was very confused and couldn’t understand how being a boy I fancied boys.  I often wondered if I was supposed to be a woman as these thoughts I was having didn’t feel ‘natural’.  But I think media and culture started to change and I was being exposed to TV shows that gave me an understanding.
And was everyone okay with you?
I am lucky, everyone I told were absolutely fine with my sexuality, my sister even asked me as she was fed up of waiting for me to tell her!  I think it was the initial ‘telling’ that was so scary.  I have also never had any homophobic responses to my sexuality so definitely lucky.
How was it for you growing up. Did you go through the usual teen tough times?
It was such a confusing time for me, I was gay, overweight, suffered from severe acne, had to wear braces and had glasses….basically was the typical geek.  A lot of my confidence issues relate to this image I still saw myself as.  I was never bullied, but kind of went through secondary school unnoticed as a shy boy.
Did your bad relationship put you off love? Do you feel refreshed now?
Ironically no, I was convinced I was still going to find ‘Mr Right’ but never allowed myself to due to my baggage I was carrying. 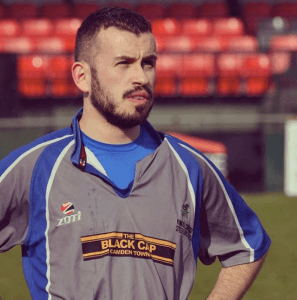 You said you play for inclusive rugby team called the King’s Cross Steelers – is that a great way of meeting guys?
Such a great bunch of guys, they are not a team but more like a family.  As it is such a big gay team within London, it is a perfect opportunity to meet guys, but when I joined it was for the sport and I made a pact with myself that I wouldn’t get involved romantically with teammates….didn’t stop the odd cheeky drunken snog though!
You look great, but have you always been happy about your body?
Not at all! When I looked in the mirror all I would see is the geeky guy from my teenage years who was fat and unattractive.   It was only in 2016 when I started working with a PT that I began to change my body shape and not hate the reflection I was seeing in the mirror.  Now it’s turned me into a total selfie whore haha! 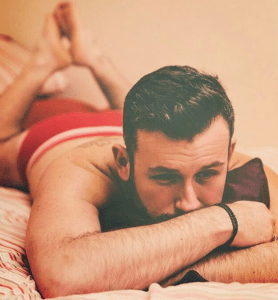 What is it you look for in a guy?
I always get my smile and my eyes, I think having a huge smile must be an asset!  Facial hair on guys is definitely a big plus point; I always say beards for guys is like makeup for girls…it just makes everyone better!  You should see me without mine (not like that is ever gonna happen!)