Is ‘Silent’ Tom on Shipwrecked the most handsome man on telly? 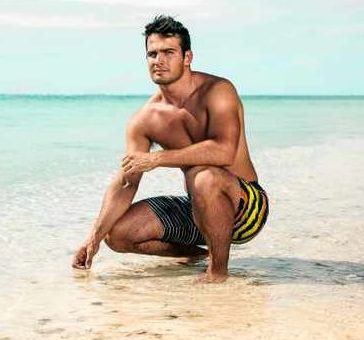 Shipwrecked is back on our screens and although some grumpy viewers are moaning that the tribes are living the easy life, being plied with alcohol and being given access to electricity, we are loving it.

It didn’t take long to realise that we were #TeamSharks. Not just because they were more intelligent and likeable than the narcissistic dumbos on Tiger Island, but because they had a secret weapon in the delicious form of military man Tom Wotton. Handy around the island with his hammer, he is also so ridiculously handsome we simply can’t tear our eyes off him, even though he has barely said two words since he arrived. Hell, he doesn’t need to.

For those of you who are interested in more than just The Big T’s pretty face here’s a handful of facts that might keep you happy. (If you can’t be bothered to read that, spool down and check out Tom’s gloriousness.)

Tom comes from an army background and while studying industrial design at university is training for the Marines. So he’s something of a buff butch hero! Swoon! Although he is only 20, he says he has “old school mindset”, which we don’t mind at all.

Speaking about his experience on the show scrummy Tom admits he was surprised by the heightened emotions he witnessed on the island.  “I was quite overwhelmed about everyone being very emotional,” he says. “Everyone was crying over a packet of crisps! I am not used to seeing people bawl their eyes out over anything.”

Although Tom says he didn’t believe he’d find love on a telly show (erm, we have a feeling he may have a lady can home called Emily), he says that he and our other favourite Kush had the strongest bond, which surprised him!  “Stereotypically we wouldn’t be paired up as friends because I am this old school Devon guy with old values and he is a new half Indian guy from London who is into fashion,” he says. “We are opposite sides of the world but he was absolutely brilliant.”

Is it even paradise without an outdoor shower?🤔

If only Devon water was as warm 🎣 #Portugal