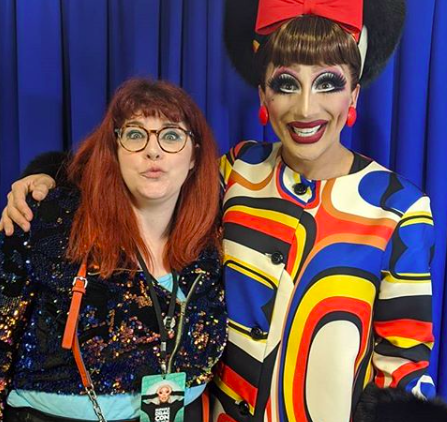 Now the Vixen backs the campaign!

Earlier this week GuysLikeU reported that drag sensation Mary Mac had launched a campaign to get telly bosses of The Chase to produce a drag version of the quiz. Now the show’s biggest star The Vixen appears to have backed the campaign, admitting she’s already asked producers to do it.

Speaking live from her Lockdown Live show in Lanzarote over the weekend, the Irn-Bru swilling drag sensation revealed that it was her dream to appear on the smash hit quiz and asked fans to help her launch a campaign to get her and her scene queen pals to take on the Chasers.

“I really want to be on the Chase,” she announced during the 90 minute extravaganza. “If anyone is out there with connections to anyone on The Chase, will you ask them to do a Drag Queen special. They used to do it on The Weakest Link. They did two of those. They could a do Chase drag queen special. My team would have to be, me, Lola Lasagne, cos she knows every thing, mainly because she is nosey. Mrs Moore, because if there are music questions, she’s on it and The Duchess. Older queens. I notice that older people are better on The Chase. They always seem to do well. I love The Chase Bradley Walsh is fabulous. Maybe we can campaign for it.”

When the story appeared on Monday, legendary drag queen Lola Lasnge – aka Stephen Richards – backed Mary and pleaded, ‘Bring it on! So long as we can face @Jenlion.”

Now Jenny Ryan – The Vixen – has revealed that she would love a drag version of the show, replying to Lola: “Late to the party – I’ve been hassling the producers for a drag special for YEARS!”

However, fans are keen that the drag queens who do eventually make it on the show should stick to club kids nd not former Drag Race queens. Said one fan Shaun: “sounds great but please don’t just have all ex drag race contestants, Let’s have the hard working drag queens up and down the country.”

Sounds great but please don’t just have all ex drag race contestants! Let’s have the hard working drag queens up and down the country!

So come on producers of The Chase – what are you waiting for???