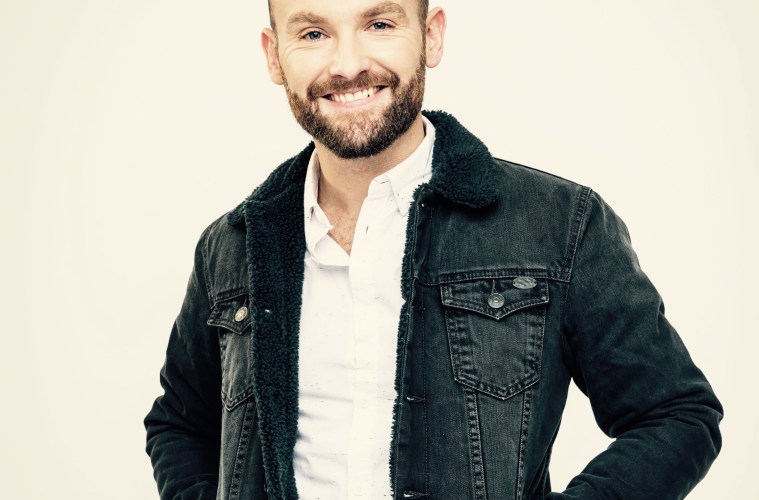 Kevin Simm from The Voice opens up about the highs and the lows of fame!

After three months of blind auditions and tough battles, viewers finally get to vote for their favourite contestants on The Voice this weekend as the live shows begin. And this year, it’s going to be a tougher job than usual, as there are genuinely so many fine vocalists desperately wanting our votes.

But as hard as it will be for us to choose between the mighty singers crooning for their lives, we at GuysLikeU have a soft spot for the fabulous Kevin Simm. Of course, we go way back, lusting after him during his Liberty X days. Back then, Kev was a peroxide blonde stud muffin, beautifully hairy (until he foolishly waxed off his delicious chest hair) and simply gorgeous. Not that he believed that. He reckons there was never any demand for him – well, boyo, we can tell you there was!

But that was then and this is now and we’re just thrilled to have Kev back in our lives. And we have our fingers, legs and toes crossed that we see the humble and modest fella succeed through the live shows, because if there is any one who deserves another chance at this music malarky, it’s lovely, sweet talking Kevin!

It feels like such a long time since your first audition, but it was TV gold, and so, so emotional.

On the day I was feeling very emotional. I can’t believe how much my performance resonated with people. I had such a great response on Twitter after it was screened, it was just a bit crazy really.

You’re one of the few established people who actually got through – did you ever think you were being set up for a fall?

Totally. There as so much gong through my head when I applied for the show. I always thought if I didn’t want to do it I could back out. Although I know The Voice isn’t biased in any way, I did think to myself, will they try to make an example of a former popstar or something like that. So I was a bit worried. But then I thought, I’ve seen so many people on the show who aren’t popstars who had amazing voices who didn’t get through. So I just sort of thought, it’s a big gamble, there are no guarantees, it doesn’t matter how good you think you are, you might not get a turn anyway and decided to stay positive.

Of course you’d been through the reality show process before – on Popstars! Is the process changed since then?

I have to be honest, it’s hard to remember Popstars. All I can recall is that that it was very much like a proper audition process, just as you would in real life. The only difference was it was being filmed and it didn’t feel like it was a TV show. But the people behind The Voice, really look after us. They don’t go out to make anyone look bad, it’s not that kind of show. It’s very supportive and trying to get people to be the best they can. They’re not just throwing you in there! Even if you aren’t a nice person they’d still make you look like one. The people are very positive and helpful.

Back in the day, when you signed your deal with Liberty X did you think you had it made, that you made for life? Did you have that popstar arrogance?

Of course we did. But it wasn’t arrogance, we were just so excited and proud of what we had achieved. But you have to remember that we had a bit of a tough start to our careers. We were called the ‘Flopstars’ and then we were sued over our name, our second single almost got us dropped. It was three singles in before we had a big hit. When we got the number one with Just A Little and the Brit award, it was only then that we started thinking that perhaps we had it made and we had a career for life and we had a great time. But the music industry is a lot different now. It’s not like it was. We came around when the music industry was becoming less profitable.

Oh God, the music industry is just not as much fun anymore.

Back then, you could have a huge hit and that would be it. You’d be made for life. There was lots of money around and records really sold copies. Nowadays you can have a number one and sell around 20, 000 copies. These days it feels like a number one doesn’t mean as much anymore.. Actually it’s not that it doesn’t mean much anymore, but you certainly couldn’t retire on what you make.

But as much as we love the old days, I guess we live in a world where music is more accessible and we can produce music much easier.

In one sense I think we live in a world where you can find music in many ways, but the romanticism of going out and making an effort to buy a record or waiting to hear chart positions is no longer there. It’s sad. Liberty X were still part of that era. I still have the print out of the week we went to number with 163,000 copies. There were no downloads back then, people actually went out and bought the record.

When you were at your peak in Liberty X, did you live like a Beckham lifestyle?

Ha! It wasn’t exactly like Beckham’s life, but we had an amazing ride. We were flown all over the world, went to amazing parties, met really amazing people. I enjoyed it, but it was just work at the end of the day. The crazy celeb party lifestyle wasn’t really for me. I personally prefer a drink in a nice old pub rather than being in a nightclub drinking Crystal at 4am in the morning. It was a superficial world, but it was exciting at the same time. When you’re in a pop group you work non stop, you don’t really get that much time to do much.

And you normally kept yourself very much in the background while the girls were being papped left, right and centre.

To be honest, there was probably never any demand to see me. At the same time, I was more than happy to be in the background. In fact, as soon as I could, I bought a house in a little village and travelled into work when I needed to. I just wanted that quiet kind of lifestyle with my wife and kids. The showbiz side never really interested me.

When Liberty X ended, was it gut wrenching?

No not really, because we had all agreed that we wanted it to end. We hadn’t been dropped or anything. So it was our choice. We put our final day in our schedule and knew when our last day working together would be. I was happy to take away from the band. I had been away writing and doing my own stuff, I was getting my own album together. I even had a number in South Korea. It was when my own album didn’t work out that I felt dejected.

That was the hardest thing for me to deal with, and actually it put me off doing music for at least two years. When you write an album, you put your heart and soul in to it. I’d made the mistake of going with the first person who showed me interest. There were all these promises and then eventually the people at the record company I was signed to suddenly stopped answering my emails. I’d email them to see what was going on and they just never bothered replying.

Exactly, it’s a shoddy way to deal with people. It was a small independent company so thought I’d be treated better. But that didn’t happen. It left a nasty taste in my mouth.

Did the songs ever see the light of day life else where?

Well the album did get released in Japan. But that was it. The songs were could and I think a couple of them could be hits now if they had a tweak. But to be honest, I would begrudge that record company taking any money from those songs, as they having publishing rights

We still can’t believe One Direction have taken time out as they had the world in their hands. Do you understand why they’ve done it!

From the outside they must look crazy as we all think they can make so much money. But on the inside their lives must be crazy. And it must get to them that they can’t have a great life. They probably can’t go anywhere in the world without being bothered by someone. I don’t know how they get on, but that’s a pressure in itself. If you’re not happy doing what you’re doing you shouldn’t do it. They have enough money to never work again. I mean we were working constantly, no day offs, and that was pretty tough on us. For them, it’s much more magnified even more so it must been even more pressuring for them. I would never pass judgement on them.