How many eager make up artists does it take to tan up Dancing On Ice’s Sylvain? 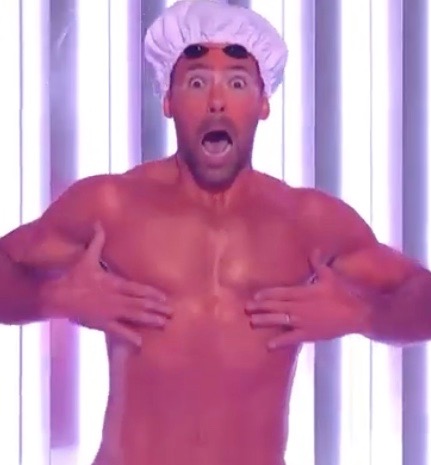 When the brilliant Dancing On Ice returned to our screens recently we were a tad disappointed that gorgeous Sylvain Longchambon hadn’t been paired up with a celebrity partner. This sadly meant viewers would only get a glimpse of him and his delicious abs in group dances during the series.

But in the episode that aired over the weekend, producers gave gays and girls a right treat by dreaming up an insane routine using Kylie’s campthem Wow! Set in a beauty parlour, we saw the celeb skaters who’d performed in week one being pampered under hair dryers.

A DEEPER SHADE OF…. ORANGE! Did you like our group number from show 2? SO much fun! WOW WOW WOW WOW! #DancingOnIce #DOI2020 #TeamHandMatt #sylvainlongchambon #kylie 👬⛸🌈

But the highlight of the routine came when Sylvain popped out from behind a screen wearing just a towel, having experienced a Ross Geller-style tan disaster. Sadly for Sylvain-spotters, it was a blink and you missed it appearance before he skated off camera. But no fear, that’s what the pause button is for.

Ever wondered what it takes to get that #DancingOnIce look? Turns out: a lot of work. 🤣 Which Pro would you trust with your hair and make-up?

Thankfully on social media, the hair and make up team posted oodles of behind the scenes clips of Sylvain being prepped for the performance. 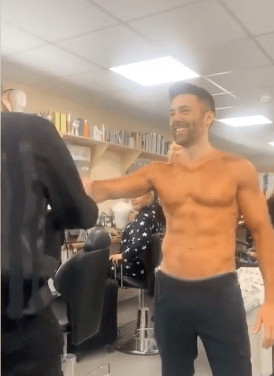 And my, what a lucky team they were indeed. But look at the picture below, just how many boys and girls did it take to get him ready???? 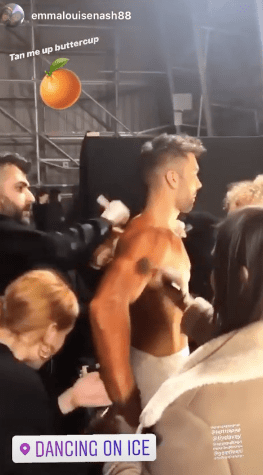 This series has been an exciting one so far, with Matt Evers and Ian ‘H’ Watkins making history by performing the show’s first same sex dance.