Shipwrecked’s Sean: “I wanted my dad to see who I am now – he doesn’t even know I’m gay!” 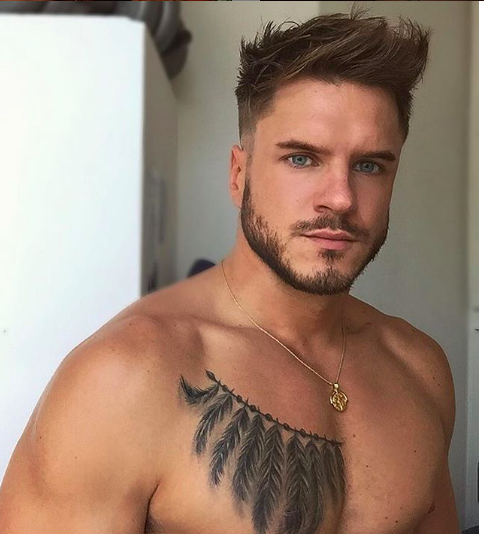 Question. Is it as hard for you as it is for us to watch the current series of Shipwrecked without having to grab a wet wipe? Seeing all those impossibly beautiful people striding across the golden sands of the Cook Islands is pretty tough going for us normal looking folk who are easily tickled by a pretty face and a buff bod. But hey, who are we kidding? It’s super fun to gawp and it makes us super frisky. But enough about that… Believe it or not, yet another insanely handsome chap is set to arrive on the island tonight (Friday 8 February) and rub shoulders with swoon some Tom and cutie Kush! From the look of 27 year old account manager Sean Lineker, we reckon he will ruffle some feathers and get some folks all twitchy in the swimming trunk department. And guess what? He’s a gay!

Here, the dashingly suave looking fella opens up about why he decided to head off to a desert island with a bunch of sexy strangers, who he got on with and reveals how nervous he is about being openly gay in front of the nation.

I can FINALLY confirm my worst kept secret ever, I somehow managed to spend my summer on SHIPWRECKED. It really was a mental experience and I’ll get to re-live it all over again in the next couple of weeks. Usually I’m surrounded by snakes but now I’m surrounded by Shark’s and Tiger’s. Tune into @e4grams at 9pm for @e4shipwrecked 🌴🦈🐯 #shipwrecked #e4 #shipwrecked2019 #newarrival

Why did you apply for Shipwrecked?

To have a life changing experience that you could never pay for. I’m 27 and if I didn’t do something like this now, then I never would. Also a part of me wanted my dad who left around 5 to 6 years ago to see who I am today, he doesn’t even know I’m gay!

Thousands applied for the show, why do you think you were chosen?

I think I have an interesting back story growing up on a British Army Camp in Germany. I also do not feel like I’m the typical type of person who would go on a back to basics show, and it was a massive challenge for me personally. I also hope that I’m a good role model/representation of the LGBT community.

Before appearing on Shipwrecked, had you any brushes with fame?

I don’t really have any claims to fame, maybe sharing the same name as Gary Lineker? Haha.

Before Shipwrecked, what’s the longest time you’d spent away from home?

Growing up I spent a lot of time at boarding school and away from home, my dad was also constantly away on tours with the army. So I’m pretty much used to being away from home, I got over any type of home sickness from a very young age.

What did your friends and family think of you doing the show?

My friends and family thought it was totally hilarious that I was going on Shipwrecked. I’m not a ‘back to basics’ type of guy, and I’d probably be described as quite high maintenance. So, the thought of me going onto a deserted island to fend for myself was laughable

What did you hope to get out of your Shipwrecked experience?

I’m not sure what I expected to get from the Shipwrecked experience, as I didn’t really know what to expect in general. But mainly I was excited to spend time away from London, social media, my phone and day to day life. The experience was something you couldn’t pay for, it was a totally unique experience and I am so lucky to be part of it.

What were you most nervous about?

I had no idea what I was letting myself in for. I didn’t know if I’d be voting for people to leave, if people would be voting to keep me on the Island. All I knew was that it had been totally changed for the 2019 series, I was SO nervous about what was going to happen to me and the upcoming twists. It’s also the first time since coming out as gay that I would be openly gay in front of the whole nation so that was quite daunting as well. I haven’t spoken to my dad in around six years, when he left, so he doesn’t even know I’m gay.

Were you hoping to find romance on Shipwrecked?

I was definitely open to the idea of finding romance on Shipwrecked. I’ve been in a few different relationships that have all ended horrifically for various reasons, but I’d come to the conclusion that it was the type of guy I was going for. They were all very much into partying, the London scene, it was a bad influence on me and ultimately made me very unhappy. I was hoping that if there was another gay guy on Shipwrecked they’d be totally different to anyone I’d come across in my day to day life in London. If you’re going to meet someone romantically, what better way then on a beautiful island.

What were your first impressions when you arrived in the Cook Islands?

I was utterly gob smacked by how beautiful it was. It’s totally indescribable, it’s actual paradise.

Who did you bond with?
This is a difficult question as I was close to different people at different stages of my experience. But ultimately the people that made my whole experience what it was were Chris, Hollie, Queen T, Leah and Liv.

What skills do you think you brought to the island?

I don’t think I brought any particular skills, but I’d like to think my character bought a different dynamic for everyone’s experience.

Did you miss being away from your phone and social media?

I use social media quite a lot, it’s actually turned into a bit of a job for me. But I did not miss my phone or social media one bit, it gave me anxiety to turn my phone back on. It was refreshing to hang out with people, and everyone just be totally in the moment without any distractions of being constantly being on their phone.

Is there any other technology that you wish you had on the island?

I do wish I’d had a camera of some sort so I could capture little moments, but I guess they’ll live in my memories.

Would you go back and do anything differently?

I wouldn’t necessarily do anything different, but I do wish on my first couple of days I was a bit more confident.  I also wish I’d called people out a bit more if I thought they weren’t being genuine or fake.

Shipwrecked is on E4 at 9pm.